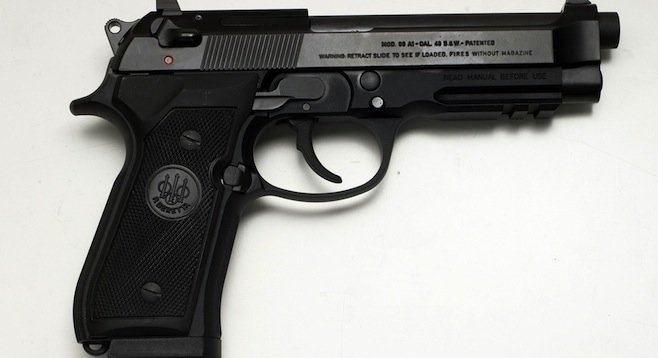 Police found evidence connecting two men with at least four armed robberies that occurred recently in Escondido. One of them was due to be arraigned in San Diego’s North County Superior Courthouse for felony robbery on January 7.

On October 22, a 7-Eleven on Midway Drive was robbed. The man brandished a black, semi-automatic handgun and said, “give me all your money” before he reached into the register and grabbed a handful of cash, the clerk reported.

“The clerk described the suspect as a black male,” according to detective John O’Donnell, “about 18 to 25 years old, six feet tall, and weighing about 145 or 150 pounds.”

The following month, two other 7-Elevens, one on West Valley Parkway and one on South Escondido Boulevard, were also robbed by a person of the same description. Those incidents were reported on November 17 and 18.

On November 19, a black male adult entered the Chevron gasoline station on East Via Rancho Parkway after 10 p.m. He reportedly demanded “give me all the money” before pistol-whipping the clerk in the head with a black handgun. Police said the robber took an undisclosed amount of cash and three packs of Newport cigarettes. The getaway car was described as white with black wheels.

Two days later, on November 21, a clerk at the same Chevron station contacted police about a suspicious man loitering there after 7 p.m. She said the man ran away as soon as Escondido police arrived.

Officer Havens stated that he noticed a white car with black wheels parked behind the gas station with its lights off. When he approached, the car’s engine started and it began to leave, with the lights still off. The officer shined his flashlight into the car and “the black male driver turned and smiled at officer Havens as he drove by.” Police found the car a short distance away “collided with a light pole next to the roadway.”

The white Buick Lacrosse was registered to Samantha Magante of Escondido; police were told that she is the girlfriend of a man named Jamel Garner.

Officers looked in the abandoned car and found a black baseball cap with a white "C" on the front and “Deep Valley Crip” embroidered on the back. Probation paperwork for London Williams was found in the trunk, according to police.

Jamel Garner, 25, and London Williams, 21, said to be cousins, are currently in custody. Garner is held on drug charges and accused of giving false ID to police officers. Williams was due to be arraigned on January 7, 2014.

UPDATE: London Hailey Williams, now 22, was never charged with robbery in connection with this case. He is currently out of custody, although records suggest there is an active warrant for him. London Williams was accused of a carjacking in February 2013, in that case he pleaded guilty to stolen vehicle and was sentenced to 3 years probation. Seven months later, Williams admitted a DUI, but then failed to complete a required MADD program. In December 2013, Williams was cited for driving on suspended license, and when he failed to appear in court on February 4, 2014, Honorable Judge Marshall Hockett issued a $25,000 bench warrant for London Hailey Williams.

Jamel Lee Garner, 25, is currently held in lieu of $500,000 bail; he pleads not guilty to robbery and other charges, and is next due in court March 19.