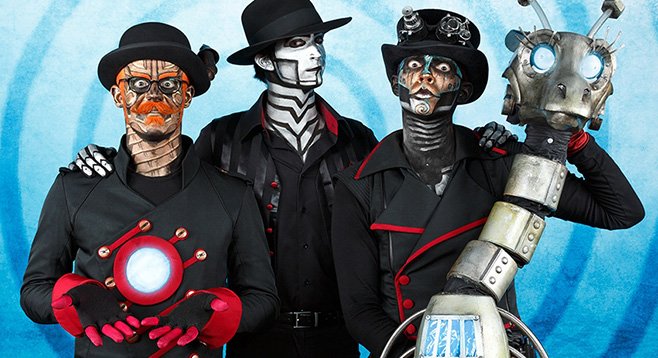 “We’re a musical pantomime troupe,” says Christopher “Bunny” Bennett of Steam Powered Giraffe. “Most know us as ‘those singing robots.’ We’re trained in movement, music, and visual design. It’s a meshing of different art forms. Four-part harmonies and robot popping and locking may seem like a terrible idea, but that’s probably why it works so well.”

Wearing elaborate makeup and costumes, the band turns up at Queen Bee’s (occasional home of steampunk dance parties) and the zoo, where kids scream for the band like grade-school groupies. “We’re family-friendly, but children aren’t our primary audience. We’re a clean act, and our demographic is huge. We’re safe enough for your baby or grandma, but cool enough for your teenager.”

The musical automatons will debut their third studio full-length MK III with a January 17 release party at Four Points by Sheraton on Aero Drive. “It took maybe a year into working on this album before we came up with a name,” says Bennett. “It works great because it references a progressive build of technology, which fits perfectly in a band of singing robots. This was also Sam Luke’s first album with us as our new robot Hatchworth, so we wanted him to be front and center on the cover. He has this sort of glowing chest plate, which made for a good place to put our name and album title bursting out.”

The sound is a blend of electronic, pop, disco, and musical comedy, with new songs such as “I’ll Rust with You,” “Wired Wrong,” “Ghost Grinder,” and “Roller Skate King.”

Given steampunk’s popularity at Comic-Con, especially among cosplayers (geek-speak for costume players), it should come as no surprise that an SPG comic book is in the works. “It’s being made available for free on the web with biweekly updates sometime this month,” says Bennett. “I like the idea that Steam Powered Giraffe is much more than a band...there’s all these little alcoves you can explore. Lore, characters, stories — however far the audience is willing to go.”