What’s shaken at the Kraken? 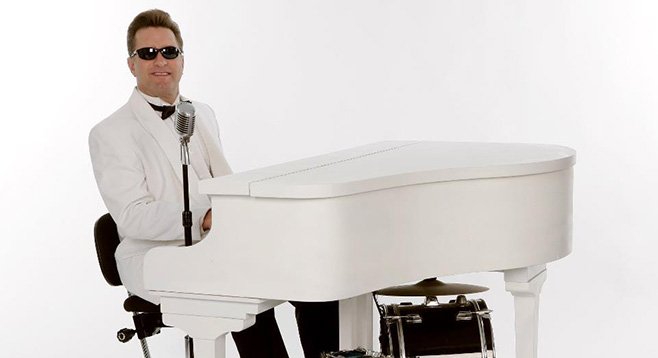 “They pulled the plug. They’re having slow turnouts on all nights,” Doug Allen says of the Kraken. For five years, the Cardiff musician ran an open jam session there two nights a week. But last month, Kraken owner Doug Aldred canceled it. “The whole problem is that it was on Monday and Tuesday nights,” Allen says. “Even though the bar was full, there wasn’t a whole lot of drinking going on.”

Allen says there’s no bad blood between himself and the Kraken. After all, he says, “Tuesday nights are the hardest of nights to fill a bar.” But Aldred eliminated live music on Wednesday nights as well. “It gets slow this time of year. Probably after Christmas,” Allen hopes, “people will start going back to bars.”

One wonders if Allen, 53, was some form of juggler in a past life. When he sits down to his sparkling white piano, he sings and accompanies himself via a left-handed bass guitar and some kick drums anchored onto the floor at angles under the keyboard. And when he plays saxophone with his steady meal ticket of three decades, ’50s–’80s tribute act the Mar Dels, he often plays two horns at the same time — sometimes with one of the saxophones turned upside down.

“That’s how it got started, the jam session,” he says, meaning his knack for self-accompaniment. “I went into the Kraken one night and no one was there. I asked if they could pay me enough to set up and just play by myself.” That eventually morphed into a jam, and when the number of musicians that showed up to play grew past 50, one night became two in order to accommodate all.

“There were definitely nights when it paid for itself. It was like a party going on there.” Then again, Allen says this isn’t the first time he’s seen gigs grind to a halt. He conjures the names of some of the players that jammed with him at the Coast Highway bar over the years.

“Reggie Smith came in, and John January, Boyd Gardiner, Pete Bogle, Rebecca Jade, and this crazy guy who traveled around with his piano on a trailer named Dan Frost...and Lenny Kravitz’s sax player. He came in one night. I can’t remember his name to save my life.” Was it Karl Denson? “No. It wasn’t him.”

Aside from Mar Dels shows, what’s next for Doug Allen? “I’m thinking about going to Hollywood and finding a producer to do a reality show.” He sounds half-serious. “I’ll call it ‘Rock and Roll Road House.’ We’ll film at a different club each week. And we’ll have jam sessions at each. Think about the potential for drama.”