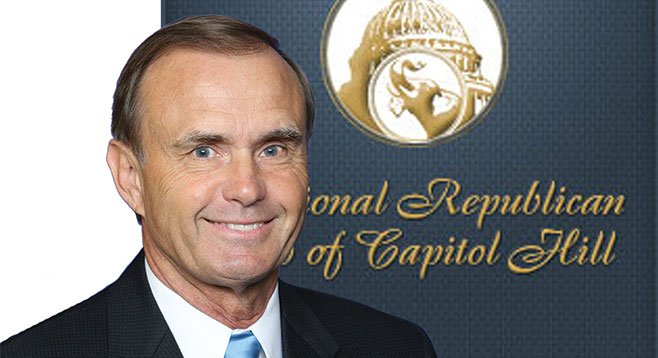 Republican ex-congressman Brian Bilbray, defeated by Democrat Scott Peters in November 2012, is still entertaining constituents in the nation’s capital, according to his most recent campaign disclosure statement, dated this January 31.

In October of last year, the former House member, who at the end of 2013 reported having $27,186 left in his campaign bank account, forked over $400 for dues at the National Republican Club of Capitol Hill, a tony private establishment commonly known as the Capitol Hill Club. “From its inception, members of the Capitol Hill Club have included the nation’s most influential people — Presidents and Vice Presidents, GOP Members of Congress, Governors, state party leaders and influential Republicans everywhere,” says the club’s website.

Befitting the status of its members, there is a dress code. “Gentlemen will please wear coats and ties in the Main Dining Room. Coats with sport shirts will be acceptable throughout the other areas of the Club. Current trends dictate the acceptability of ladies’ high-fashion attire.” On November 26, Bilbray spent $21.74 at the club for a “meeting with constituent.” Besides covering his clubbing costs, the ex-congressman gave $500 of leftover campaign cash to Imperial Beach’s Mar Vista High School as a “civic donation.”