Coyotes on the edge of Deercreek Canyon 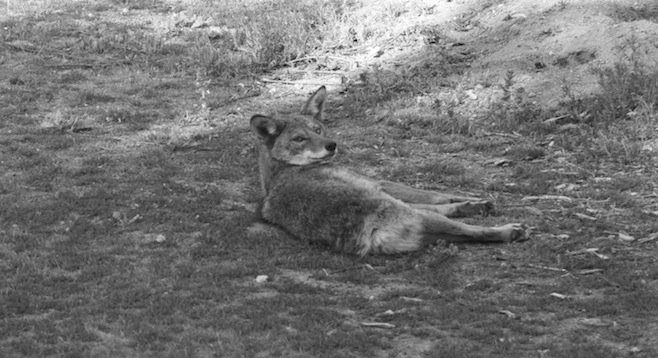 There's a big difference between a triumphant group coyote yip and a single wailing coyote howl. It's now 5:00 am and I have been torn out of my REM sleep because I am hearing a forlorn howl seeping through the walls of my bedroom. I have been hearing the same howl since just after sundown and I think I know what’s going on.

Four days ago it was a beautiful Saturday morning. I woke up feeling rested and went out into my yard to water the plants before it got too hot. As I bent down to pick up the hose I saw something moving out of the corner of my eye. I looked up to find a full-grown coyote laying down in the yard about 20 feet away from me. I had scared it and it was trying to run away but the poor thing couldn't get up and go.

I stopped to stare at it for just a few seconds before running into the house to get my camera. I had heard the coyotes yipping around my house and I had heard many stories of them and have even seen many of them bloody and dead on the side of the roads, but I had never seen a live one close up and in front of me. 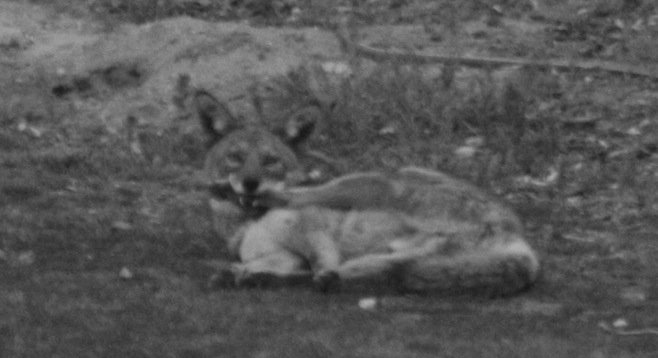 The poor guy was in pain and put its back paw into his mouth. I went into the house to get my camera and make sure my little dog was safe inside. When I came back, the coyote was still holding his back paw in his mouth.

Coyotes only come out at night around here and it's rare to see them in daylight, so I knew this poor guy was in big trouble but I couldn't be sure how much because I saw no signs of injury. He looked completely intact and his head was up with upright ears and bright, sparkling eyes.

I tried to calm him down by talking to him gently and crooning to him. I wanted to help him feel safe and let him know I wasn't going to hurt him. No sooner than two minutes later, my landlady, who lives six feet away from me, came walking up and I showed her the struggling coyote. She immediately called our retired policeman neighbor and two minutes later he pulled up with a pistol in his hand. 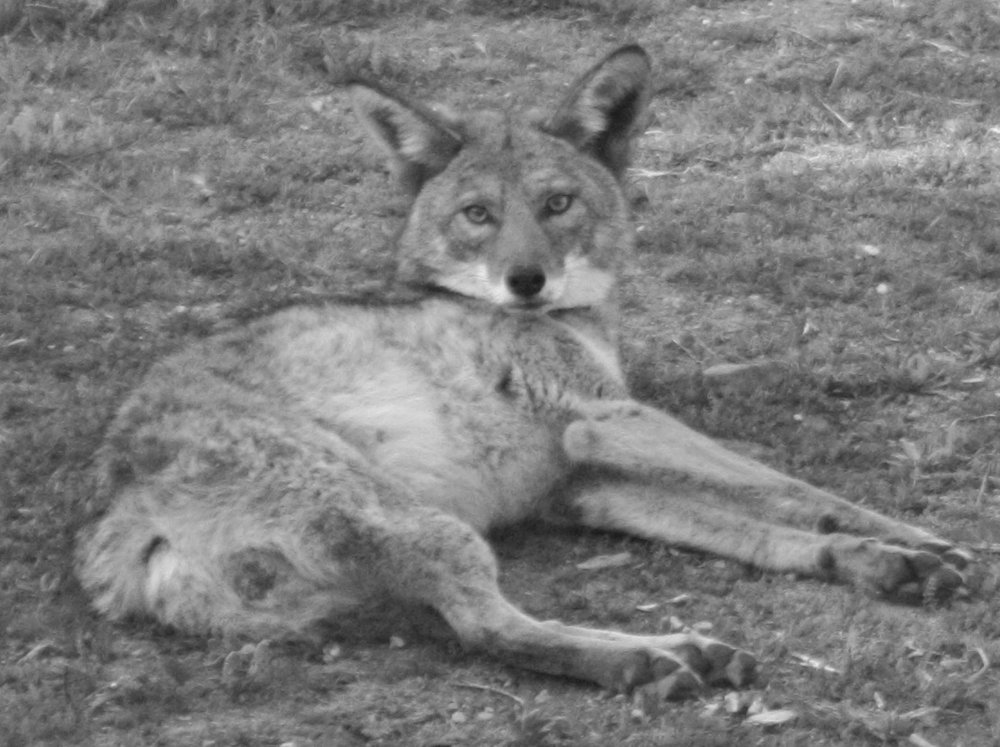 Within those two minutes, I had tried to get closer to the coyote, to continue to talk soothingly to him. He kept his eye on me and watched me move around him but did not look terrified. I snapped two pictures but I didn't feel right putting my camera up to my face because I didn't want it to scare him.

When the neighbor pulled up, I felt fear for the helpless creature. I snapped the last photo of the coyote just as the neighbor walked up behind me on the left with his pistol. The neighbor, thinking that he needed to put the maimed animal out of his misery, stepped right to the coyote, pointed his gun, and then the coyote was dead in my yard.

I was mortified. It happened so fast and I had no time to think, let alone have any say in the matter. After the coyote was dead, the neighbor examined it to discover that he had been shot in the side and had been bleeding quite a bit. He had been injured and probably limped down from the nearest neighbor’s house.

My retired-policeman neighbor didn't mean him any harm; he had surmised that the animal had too much injury to be saved by a wildlife-rescue group. But I wasn't convinced and neither were my outraged Facebook friends who would have opted for a rescue attempt.

We discussed it, though, and living out here where we do at the back edge of old Deercreek Canyon (Harbison Canyon/Alpine), nestled up at the edge of the vast expanse of scrubby bouldered hills surrounding us, living with coyotes is a part of our everyday lives. He agreed with me that they are not menacing creatures, only a beautiful part of the landscape here and that we are encroaching on their territory.

Then the landlady and the neighbors left and I was alone in the yard again except this time with one dead coyote. I felt robbed — robbed of my interaction with this helpless creature and robbed of having any say in the matter. I was angry that the coyote, in his prime, was robbed of his innocent natural life.

It was beginning to get really warm. The temperature was going to reach the 80s that day and I needed to get the poor guy buried. First I put on some gloves and had to move him out of the sun. I dragged him over to the shade of the nearest pepper tree. Then I picked up my shovel and started digging. This was not how I planned to spend my Saturday but I wanted to give him a proper burial. So I got the hole started when the retired-policeman neighbor’s wife walked up with a shovel of her own. Bless her heart, I couldn't have done it with out her. And between the two of us we managed to get a hole big enough to lay the dead beauty into it.

I convinced the landlady to allow me to plant one of my baby cypress trees on the hole with it.

Later that day we found out that the neighbor up the hill next to our property has chickens and the coyote was getting into the chickens when the lady of the house shot it.

I’d never heard wailing howls from coyotes until a couple of days ago, but now I hear someone out there looking for that young male coyote from sundown to 5 in the morning.

We have coyotes close by in the canyon. They occasionally take a cat so I have learned to keep mine in at night. It was a dog that has to hunt to eat. Someone might have been able to help. People are the worst predators, too anxious and quick to kill.

There's another story out now about a bobcat eating chickens with "I just want to kill whatever's eating my chickens". Nobody wants to bother baiting a big enough pen trap to move the animal. I believe wildlife authorities have given permission to shoot rather than help. They should put the chickens out of the way in a shed, not a back yard. The hawks grab them too.

Thank you for your comment Shirleyberan, and that was the main point of my story. I'm glad you nailed it on the head. First of all yes, 'they are dogs that have to hunt for food', ie; if a pet dog was left abandonded in the same hills it would resort to doing the same thing if no one was feeding it dogfood regularly. Secondly, yes. 'People are too anxious and quick to kill, and people are the worst predators'. That my dear, is an understatement and I know you know what I mean. I think we need to create solutions which accommodate all the living beings who share a proximity, not just humans. If you're going to keep chickens, put them in a space where no predators can harm them.

Laura - I live in the city. Reminds me of the time we caught a (small) fox on the neighbor across the street's front porch. He was wandering the street and I had an animal carrier big enough. He got lured in by a hot dog after we corned it on the porch. He didn't fight, guess tired out. I called wild animal rescue but they didn't want to drive here. Next day we just let it back in the canyon one street over. It never got angry, just fed, and back home. Never saw it again. Neighbors next door have chickens, and across the street, newly OK for this area. Nobody I know would go after a coyote, over a bird, with a gun. Thanks for the touch of compassion.

Thank you for yours as well. I greatly appreciate your feedback.