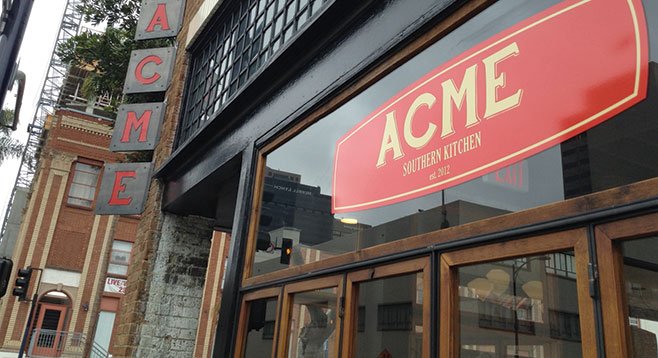 Wow. What a difference from last time.

I stuck my nose in in early January. This is near the old Central Library, Ninth and E. The sign, “Acme Southern Kitchen” was up, but inside it was all dust, contractors, a pile of junk in the middle of the concrete floor, and screeches from new kitchen equipment being maneuvered into place.

Now, the little eatery is transformed and doubled in size. The bargain-basement Chinese café that was here has Cinderella’d into the kind of place you could take your proper, fussy aunt from, say Shreveport, Louisiana, or Charleston, South Carolina, without getting embarrassed. 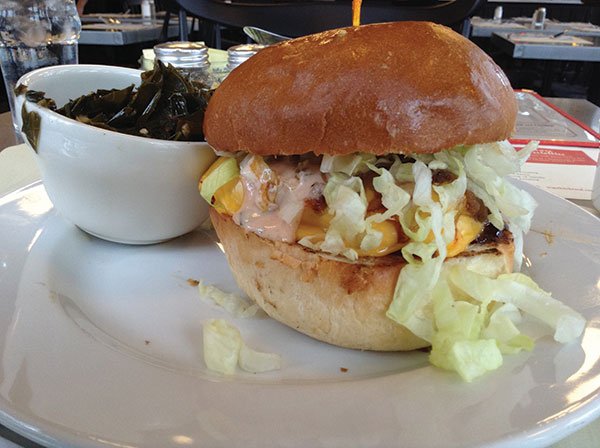 But I can see from the menu it’s not all that cheap. But I go in anyway. Just looks so cozy. I sit myself down at a table against the window on the E Street side. You can see the old library across Ninth.

Southern food? I think about this column’s savvy commenter, “Honest Government,” who left some advice on the website:

“We have a lunch special,” Cassandra says. She’s the server. “A main, a side, and dessert. Fifteen dollars. It’s the best deal.”

Turns out the 15-buck special’s a holdover from San Diego Restaurant Week. The mains are items such as pulled pork on a roll, chipped bologna, fried chicken on a “house-baked angel biscuit,” grilled meatloaf, and chicken pot pie.

They have à la carte, too; pretty much the same items and a couple of dollars cheaper, but with no sides and desserts included. Oh, and one or two extras, such as fried pork chop with dill pickles and mayo ($12); or fried green tomatoes ($6) or Southern-style deviled eggs ($6).

But I stick with the $15 lunch special. Order the meatloaf sandwich with collard greens for the side.

“Next time, you need to try our Southern-fried chicken,” Cassandra says when she comes with my meatloaf. “It’s on a buttermilk waffle, with jalapeño honey. A best-seller. And pork chops? Soon we’ll have them dredged through the crumbs and spices and roasted. And jalapeño cornbread. And angel biscuits. We’re still pretty new.”

She lays down my meatloaf sandwich. Uh, oh, I see. It’s actually in hamburger form. 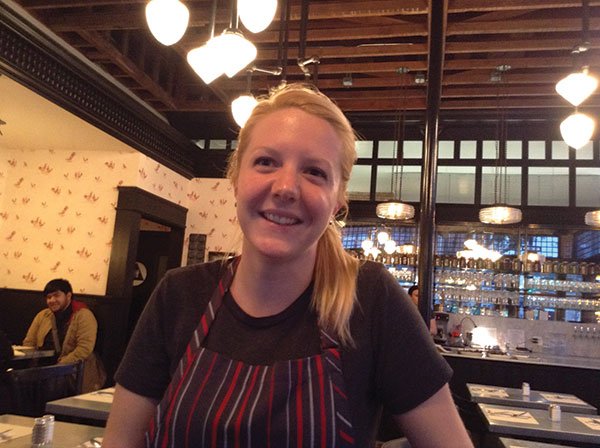 I mean, guess I was expecting something more... spread out. But the taste is fine, really enhanced by the luscious, sweet sauce.

“We call it ‘comeback sauce.’ It’s from Mississippi,” says Cassandra. “It’s like what they call a remoulade in Louisiana.”

Seems it’s basically a mix of mayonnaise and chili sauce. And, yes, it’s got a little peppery bite to it. It’s a mess in there: shredded lettuce, melted American cheese, an evil dark sauce oozing out the bottom, pickles, all hiding the actual meat patty.

The bun is baked here. You can tell: it is as feathery as a fresh croissant.

But my favorite stuff is the collard greens. They’re garlicky and, just like the menu says, sweet and smoky. None of that sometimes skanky flavor you can get if they’re just boiled and slapped on your plate. And, man, these are peppery. You have to pace yourself with them or you’ll really start to sweat.

Would like to have something to drink if I wasn’t working this afternoon. Something Southern, like Dixie Lager (12-ounce bottle for $4) or something local like “The Harlot,” from Societe ($8). Or house wines ($7 by the glass). Instead, I opt for coffee ($2.95). Chicory coffee, Cassandra says it is.

Johnny Cash is singing “Swing Low, Sweet Chariot/Comin’ for to Carry Me Home,” and then it’s Julio and Willie doing “To All the Girls I’ve Loved Before.”

For the last act of the $15 deal, I haul up every ounce of courage and ask for the bread pudding with hard sauce. The challenge: get over the horror I’ve had of the stuff since I was a kid. Every time we’d visit Grandma, she would bring it out as her treat. Yuck! Too clammy. Too sickly sweet. Too bready. I’ve hardly eaten it since.

“Well,” says Cassandra when I tell her, “you could have the raisin cake or peach Brown Betty with ice cream....”

She brings this little bowl with what looks like a dinner roll in it, plus a white sauce poured over the golden-crust top. I take a bite. Sweet, warm, and thank goodness none of the cloying thing I remember. Still not my all-time favorite dessert. Still bready. But good enough.

Thinking of Grandma, it strikes me: this Southern cooking is like a retro machine taking you back to 1950s Ozzie and Harriet days. Food as it was before it got Europeanized, health-foodized, Asianized, made super-sophisticated. The South may be the last bastion of this unhealthy-as-hell-but-oh-so-comforting food...the South, and now the Acme.

As they say, the past is another country.