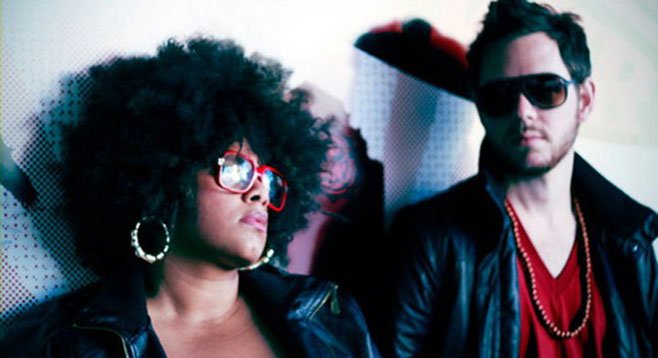 “The live show? It’s pretty simple,” Mike Illvester says when asked about the mechanics of how his duo, Fly Moon Royalty, manages to sound so large. “I sing and play keys, and Adra sings. I produced all of the music, so I pull out bits and pieces. It’s like a traditional hip-hop setup,” he says, “with tracks running.” The end result is a bumpy mashup of soul, funk, and R&B they call electro-soul. “I’ve been producing hip-hop for a long time.”

Illvester (he goes by Action J) is 34, was born in Canada but grew up in Michigan. He now lives in Seattle. Adra Boo, also 34, is from Seattle. The two could not be less alike. Illvester is computer geek-ish; Boo’s roots run deep in the Seattle gospel-soul tradition.

Mike and Adra conference-call the Reader from the Seattle area. The beat-maker claims their music was more an evolution than a choice. He tosses words like “organic” into the conversation. “Having a singer on it was a fresh new perspective.” He breaks it down even more: “When I wrote ‘Lemonade,’ I wanted to see what Adra could do.”

Boo says FMR more or less got started at a company-orientation meeting while the two worked at a Seattle deli called Mel’s Market. “Mike introduced himself to everybody as a musician. We started talking every day after that. It was on.” Action J says “Our sound fits into many markets — kids, adults,” even punks, once. Or, as Adra puts it, “Everyone gets their ass down.” Seattle Magazine agreed. They voted Fly Moon Royalty one of the city’s Best New Bands, and in 2012 City Arts voted them as the city’s Best Local Band. But Boo says, “We never even think about how it’s gonna sound when we record. We just move with the feeling. And wherever the feeling goes, you gotta move with it.”