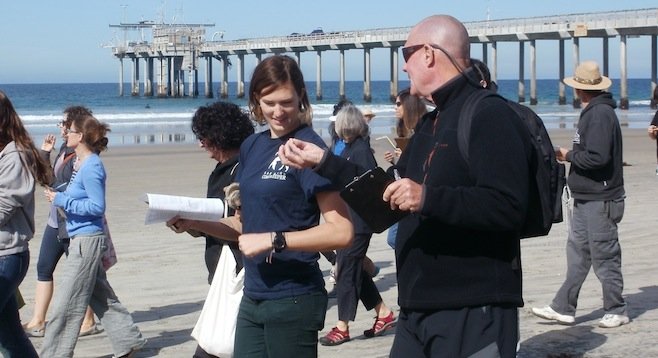 About 45 volunteers learned how to do surveys of the year-old Marine Protected Areas on February 8 at Scripps Oceanographic Institute and on the beach near the pier.

San Diego Coastkeeper and Wildcoast, two clean-water advocacy groups ran the training. Data from the surveys helps the state determine how to best protect and manage each area,

"We are citizen scientists collecting data," said Kristen Goodrich of Coastkeeper. "Trained volunteers who can collect accurate and reliable information."

The project counts human activity in the Marine Protected Areas, which stretch from the ocean to the mean high-tide line of the beach. So, surveyors walk the beaches in segments up to 1.5 miles long, counting the people in the MPA and noting what they're doing — from walking and tidepooling to surfing and operating commercial boats.

San Diego County has 11 Marine Protected Areas, created by the state on January 1, 2012. The areas start at the U.S.-Mexico border and go up to Carlsbad’s Batiquitos Lagoon — though the surveys start at Swami's and go south. Four wetlands are part of county's list, according to Goodrich.

"This is the first comprehensive human-use study along the San Diego coast," said Zach Plopper of Wildcoast. "I've been using the coast for 20 years and it's the first time I thought of the coast this way."

Many of the protected areas are designated "No Take" but others have spots where pole-fishing is allowed, for example.

The new layer of regulations has raised enforcement issues that state parks and state agencies are still trying to work into their rules they already enforce. The same survey form is being used in the state's 124 MPAs and has been changed several times as the groups hash out what users are doing.

One persistent conflict between Northern and Southern California: how to define paddle-boarding.