Kevin Burdette: Shakespeare is a "gateway drug into opera"

An interview with a comedic opera singer: part 1 of 2 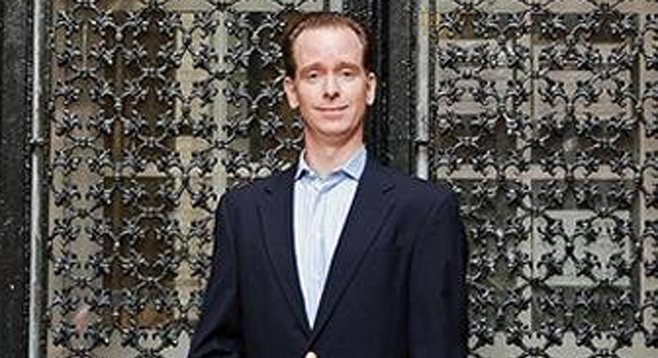 Watching Kevin Burdette perform a comedic opera is kind of like watching Jim Carey perform opera — only Kevin sings better. Kevin is a lanky bass from Knoxville who nearly stole the show last season as Sulpice in Donizetti’s The Daughter of the Regiment.

Kevin has brought his comedic timing back to San Diego to perform the role of Dulcamara, the traveling elixir salesman in Donizetti’s The Elixir of Love.

San Diego Reader: You look like you run. Are you a runner?

KB: Yeah, running is my thing. It’s not just the exercise but also mentally it’s what I need to clear my head. It’s also how I get acclimated to a new city. Being back in San Diego I like to go for a run along the waterfront and it gets me mentally in the game.

SDR: Do you listen to music when you run or leave the earphones at home?

KB: Typically I don’t listen to music, but when I’m working on an opera I haven’t done in a while, I will listen to it during a run just to keep it in my head, but running really is about clearing my mind. It’s a great thing, my head just kind of clears but every now and then I’ll bring out my really old MP3 player and take it with me. 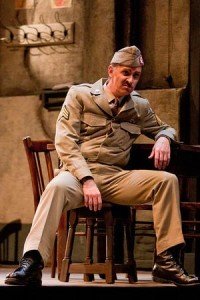 Kevin Burdette as Sulpice in SDO's Daughter fo the Regiment.

SDR: I think it was Misha Dichter, the pianist, who said that Bruckner’s Seventh Symphony was the perfect music to run to — that it was the perfect length and had a great arch for a run.

KB: I gotta try that.

SDR: This is the second time you’ve stepped in to a role as a replacement at San Diego Opera, your second time rescuing the show...

KB: Well I wouldn’t go that far but this is the second time I’ve had the pleasure of singing Donizetti in San Diego.

SDR: Are we going to see you come back in the future?

KB: Well, let’s hope. Ian [Campbell] asked me about something for a couple seasons from now but I’m already booked elsewhere. Ian is great about being faithful to the people who have helped him out and I hold him and what he has done here in highest esteem. I think he is a fantastic impresario.

SDR: Are there unfantastic impresarios who are unfaithful?

KB: It’s a very political industry. As a performer you run into a lot of façade, or maybe I should say “positive feedback,” in order to get the best out of a performer. You know, the false congratulation when maybe you weren’t singing your best that night. I think that mentality bleeds over into people saying they’re going to bring you back when maybe they don’t really have anything for you coming up.

SDR: There is that, I don’t know what to call it. A politeness? Niceness?

SDR: Maybe there’s a little less of it in other countries, perhaps Germany...

KB: Germans give it to you straight when it comes to what they thought of you.

SDR: I don’t want to say it rubs me the wrong way but when something is not good and yet it is called good by writers, PR people, and what have you, do you think that creates confusion for the audience?

KB: It creates confusion for the public, absolutely. The challenge for any form of entertainment, certainly opera, is to create a new and bigger audience. When a new person goes to the opera and maybe thinks it’s stilted and boring and they don’t like and then reads reviews saying it was the best thing ever, that reinforces the idea that maybe opera isn’t for them. On the flip side, it also happens the other way. A person comes to the opera, maybe a comedy, and loves it only to read a review where the writer claims it was too low-brow or this or that, and there’s also cognitive dissonance from that. It’s much better that the public has a good time and the critic is negative, than the other way around.

SDR: Can opera be funny?

SDR: Are you lying?

KB: Ha! I’m not lying, I think it can be hilarious — and not just “opera funny.” "Opera funny" is when the audience gets that you’re trying to tell a joke and they’ll respectfully respond to that with a laugh but it can be legitimately funny. I did a show in Santa Fe in 2011 called The Last Savage by Menotti and it was laugh-out-loud funny. The audiences were belly-laughing.

SDR: Would you say it’s similar to the way that Shakespeare can be funny?

KB: Yes, that's a great analogy. In fact I feel as though there are a lot of parallels between going to see Shakespeare and going to see an opera. They’re both tradition-rich and history-laden art forms that could be perceived as being dusty, but they don’t have to be. They’re ripe for updating, which maybe traditionalists don’t like, and can be experienced as new and fresh. Another similarity is the rigidity of iambic pentameter and the rigidity of music — the rhythm of the music — they inform you and support you but they can also contain you. The performer has to figure out how to use that structure to be a support and a foundation for something that they then make their own.

SDR: I like the direction this is going. San Diego has a great Shakespeare festival at the Old Globe and people love it. I wonder if they can flip that over into a love of opera.

KB: I think it is a viable fulcrum point. It’s not a big jump at all to go from Shakespeare to opera. Also, Shakespeare’s English isn’t our English. It is, in a sense, a foreign language to our ears. It’s obviously less so than Italian but still, you have to concentrate, you have to do a little research on your own to appreciate it. If you’re going to go to King Lear, it helps to have done a little research on your own to be informed going in so you can appreciate what you’re being given. That's not unlike going to see The Elixir of Love. Yes, yes, I think Shakespeare is a logical conduit into opera. Shakespeare is a gateway drug into opera.