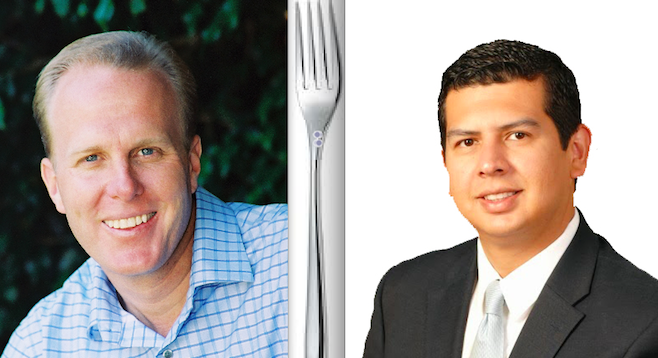 Latest contributions to Faulconer include $1000 on February 4 from Poway's Mikkel Christensen of Syngergy Restaurant Management. Jeremy Cohn, a partner in the Cohn Restaurant Group, also kicked in $1000, as did Jessica Feinman of Cohn's marketing department.

Watchers of city hall note that the Cohns are major clients of the councilman’s wife Katherine Stuart. She runs the couple's Restaurant Events, Inc. convention consulting and marketing business and as previously reported here, collects a substantial income from the coordination of the closure of downtown streets for large private parties.

The city formerly collected five-figure fees for the parties on public property but stopped the practice as part of a fee review that was subsequently interrupted by the resignation of mayor Bob Filner, according to Katie Keach, a spokesperson for interim mayor Todd Gloria.

Among the many pressing issues that await the new mayor will be whether or not the city should resume collecting the negotiated revenue, according to Keach.

"The city plans to conduct a comprehensive review of all rates and fees for review and approval by the City Council within the next year," wrote Keach.

"As part of this effort, the Special Events Department intends to evaluate and propose a fee and rate structure that addresses events hosted by commercial and non-profit entities."

According to Faulconer's most recent personal financial disclosure, filed this past October, the Cohn Restaurant Group was a source of gross income to Restaurant Events greater than $10,000, as were Dick's Last Resort, and Acqua 2.

Besides direct contributions to his campaign fund, Faulconer has also benefited from money from the state's restaurant industry, which has contributed to an independent committee set up on his behalf.

According to a disclosure report filed January 31, “San Diegans to Protect Jobs and the Economy Supporting Kevin Faulconer for Mayor” received $37,000 from the San Diego Restaurant and Beverage political action committee on January 30. The PAC is sponsored by the Sacramento-based California Restaurant Association.

During 2013, the PAC collected a total of $112,670, the records show. The largest single donor was Diane Powers and affiliated entities with $8000. The former associate of fallen Democratic financier and Jerry Brown intimate Richard Silberman runs the Bazaar del Mundo in Old Town. Second-largest contributor with $5300 was Dan Shea, advocate of a new subsidized stadium for the Chargers and operator of Donovan's Steakhouse.

Unite Here Local 30, the hotel-and-food-workers’ union backed Republican-turned-Democrat Nathan Fletcher for mayor over Faulconer and Alvarez during last year's primary, giving $15,000 to the San Diego Police Officers Association for a pro-Fletcher mailer it put its name on. The police labor group is now campaigning for Faulconer, with $20,000 of financial support from the San Diego Building Industry Association.

Unite Here has since endorsed Alvarez. Brigette Browning, president of the local, gave Alvarez $250 on January 11. No direct support by Unite Here funds for Alvarez has yet been reported online; the AFL-CIO's San Diego-Imperial Counties Labor Council, of which Unite Here is a member, has set up an independent committee named “Working Families for a Better San Diego to Support David Alvarez for Mayor 2014.”

That committee has received $2,964,500 through January 24, according to data made available online by the city clerk's office. Major contributors have included the Service Employees International Union Local 221 PAC and United Food & Commercial Workers Union Local 135 PAC.