"She just simply listened and said, ‘Talk to the legislature.’” 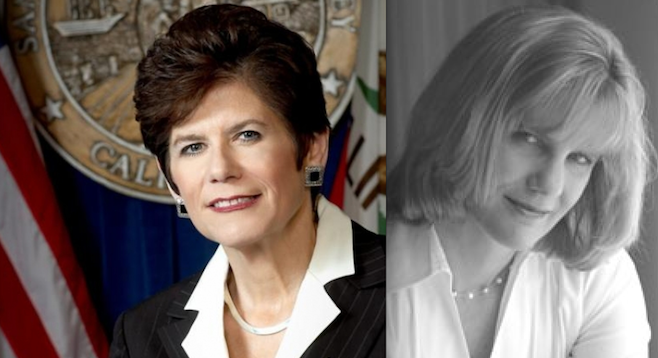 San Diego district attorney Bonnie Dumanis, under scrutiny in part as a result of a trove of campaign cash she got from employees of La Jolla luxury-car dealer Marc Chase in 2011, has accepted at least $21,000 in contributions for her 2014 reelection bid from used-car dealers and automotive-finance companies lobbying for prosecutions of attorneys they accuse of abusing consumer-protection laws.

According to a February 3, 2014, disclosure report filed by Dumanis’s campaign covering the second half of 2013, a major group of donors to the Republican were individuals associated with Orange County–based Veros Credit, Inc., a used-car lender run by chairman Bijan Bozorgi and president and chief executive Cyrus Bozorgi, each of whom gave the Dumanis effort $700 on November 7. Employees and family members of Veros gave a total of $9100, according to the Dumanis disclosure. "We specialize in the acquisition and servicing of non-prime and sub-prime automobile retail installment contracts." the Veros website says.

Ali Parvaneh, an attorney at the Madison Harbor law firm in Irvine who attended a November 2013 fundraiser for Dumanis and contributed $500 to her reelection bid, said in a telephone interview that the event was set up by used-car interests to lobby Dumanis regarding what they say are abuses of the California Consumer Legal Remedies Act.

"We wanted to bring to her attention the improper usage of the CLRA," Parvaneh said. "Attorneys in San Diego have been using the law to sue automobile dealers...generating lawsuits where none belong, [and] extorting money from automobile dealers.… District attorneys should pursue any attorney who is using the act for extortion."

Dumanis, Parvaneh said, "showed up and listened to what they had to say" but made no commitment to the group regarding their desire for stepped-up prosecutions of alleged offenders.

"She just simply listened and said, ‘Talk to the legislature,’” he said. "We all reached our mutual goals."

According to the district attorney's campaign report, Dumanis collected a total of $341,201 during 2013 for her reelection bid, ending the year with a cash balance of $239,067.

The trio was arrested last month in connection with a political money-laundering scandal involving an independent expenditure committee backing Dumanis's 2012 race for mayor.

Both Dumanis and Tierney have denied knowing of the alleged schemes. In addition to her work for Dumanis, Tierney is currently running an independent committee backing the mayoral hopes of GOP city councilman Kevin Faulconer, another longtime client.

Bonnie broke bread with the used car dealers because she is a lemon, herself!