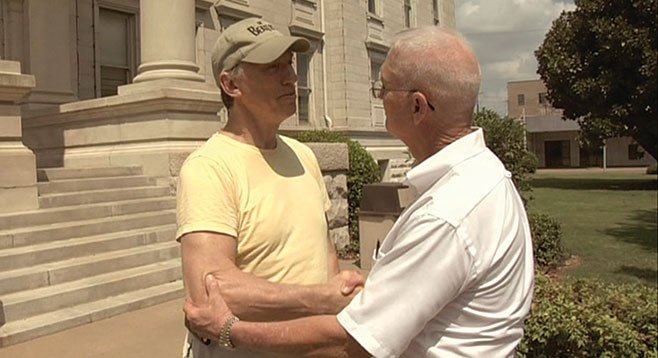 The San Diego Jewish Film Festival ushers in its 24th year with a showcase of 60 shorts, documentaries, and features chosen from across the globe.

With this year’s film festival comes two fresh faces: publicist Nancy Richards and new executive director Craig Prater. The latter was the executive director of the Palm Springs International Film Festival and has been on the job for six months. “Craig Prater has been a driving force in film festivals since 1989,” says Richards. “He brings an unparalleled expertise to the San Diego Jewish Film Festival that’s destined to make us the premier festival of Jewish-themed films in the United States.”

Along with her New York chutzpah and background in promoting Broadway shows, Richards brings “the passion and talent to coordinate the list of luminaries that go hand in hand with an event such as this and lend the support needed to help bring [Prater’s] vision to life.” You can also expect a “roster of visiting guest artists, including actors, filmmakers, and scholars, who introduce their work, participate in panel discussions, and meet and greet festival patrons.”

Highlights of this year’s festival include Brave New World, the second feature by Gregory Peck’s daughter, documentarian Cecilia Peck (Shut Up and Sing). Festival underwriters will get a sneak peek at Neil Diamond: Solitary Man, a soon-to-be-released documentary on the “Jewish Elvis.” And how about a new cartoon featuring everybody’s favorite landsman, Harvey Keitel? No, not Arthur and the Invisibles 2, but Ari Folman’s live-action/psychedelic animation combo The Congress. Keitel is joined by Robin Wright, Jon Hamm, and Paul Giamatti in this “futurological” adventure.

The festival runs February 6–16 at five venues — Arclight Cinemas, Carlsbad Village Theatres, the David & Dorothea Garfield Theatre, Edwards San Marcos, and Reading Cinemas Town Square. To avoid confusion, be sure and double-check what theater your movie screens at before leaving the house. All-access festival passes run $210 with a six-pack of films going for $70. For showtimes, pricing, and more ticket information, visit sdcjc.org/sdjff/. Below are highlights from several of the films made available to the press prior to deadline.

The Last White Knight — The punch, still being felt 43 years later, caused Emmy Award–winning Canadian documentarian Paul Saltzman to return to the scene of the assault and track down the proud, lifelong Mississippi Klansman who delivered the blow. Turns out the mitt is attached to pistol-packin’ Delay de la Beckwith, son of  Byron de la Beckwith, a fertilizer salesman and the man convicted of assassinating NAACP leader Medgar Evers. (Not surprisingly, Junior swears up and down his old man was innocent and that the actual shooter is still alive.) Saltzman was a voter-registration activist in 1965 and on his way to a meeting when the goon and a trio of henchmen decided to “have a little fun” with a perceived outsider poking his hook nose in Greenwood, Mississippi, business.

Saltzman films most of his interviews with Delay in split screen; can you blame him for not wanting to share a frame with the radical cracker? Every word that oozes from Delay’s perpetually chipper pencil-drawn lips drowns in the spittle of his ignorance. When confronted with accusations of racism, Delay holds up a photo of the “colored maid” who raised him, his “nigger mammy,” as he calls her. According to his reasoning, the fact that he never used the epithet in her presence exempts him from being labeled a racist.

The talking-heads testimony is gripping enough that the graphic novel re-creations of various acts of violence feel trivial and unnecessary. The film never quite resorts to the rhetoric and chair-tossing pyrotechnics one associates with The Jerry Springer Show, but I’m not convinced that going in a more civilized, at times sentimental direction was necessarily a sound move. Shots of sheeted cross-burners spewing their mantra of hate intercut with a group of racially mixed children reminding viewers that it’s good for white, black, and Oriental kids to play together smacks of an adult version of Sesame Street. And someone should tell these moppets that in these PC times, the word “Oriental” can only be used when describing a rug.

Listening to the misguided redneck espouse on his lifelong love affair with firearms — Delay fired his first shot at the age of four — is as damning an indictment of our gun-worshipping society as any filmed. Harry Belafonte and Morgan Freeman turn up to give the film added perspective (and marquee power). In spite of its flaws, Saltzman’s attempt to reconcile the past makes for fascinating viewing. It plays at an odd time, but this one is definitely worth the effort.

The Girl on the Train — Larry Brand debuted with the low-budget Kim Delaney “hitchhiker from hell” chiller, The Drifter. The passage of nearly 30 years finds the director still taking delight in having a psycho-loner strap his lead (Henry Ian Cusick) to a chair and turn up the shocks. Cusick’s Danny Hart is an achingly romantic documentary filmmaker with a marked preference for fiction, a path he considers “more believable.” While riding the rails to his latest project, a continuing series of interviews with a Holocaust survivor (David Margulies, he with the familiar face), Danny’s camera fixes its gaze upon the titular conductor of doom, the girl with the teary eyes fishing for an easy mark (Nicki Aycox). He bites, and the cynical, R-rated tale of con men and women that unfolds is probably this year’s darkest fictional entry.

White Panther — At heart, writer-director Danni Reisfeld’s White Panther is an update of 1930s Warner Bros. gangster melodramas. A tough and tender dishwasher (Yevgeny Orlov, in the role normally reserved for Jimmy Cagney) has two career paths to choose from: boxing or life as a tough monkey like his skinhead brother (Bogart substitute Zura Vulkan Kartvelishvily). In addition to heading up a youth boxing club, a local Jewish cop (Ze’ev Revach, pinch-hitting for Lee J. Cobb) just happens to be father to a beautiful handful of a daughter (Meital Gal/Bette Davis). There’s even a Marjorie Main substitute in sickly Mom (Natasha Manor), couch-bound and hooked up to a respirator! You’d be a lot better off watching this one for generic intrigue rather than its somewhat facile sociological exchanges.

Shoes — One of the hallmarks of each year’s festival is the Joyce Forum, a series of short subjects curated by festival cofounder Joyce Axelrod. While it would be nice if one year the festival put a moratorium on Holocaust-themed narrative dramas that tend to sentimentalize without shedding any new light on the subject, credit Joyce with booking a film that at least tells its tale of the death camps in a unique, thought-provoking manner. From a pair of elegant women’s dress shoes to jackboots to bare feet being herded into the ovens, Costa Fam’s silent 17-minute short, Shoes, takes a “knees-down” look at the life of a concentration-camp survivor. The popular series has this year been split into three sections. Shoes screens one time only, during part three of the forum.

You could actually replace "landsmen" with the more accurate "lonsman".

"Etymology: land's +‎ -man. In meanings 3 and 4, influenced by Yiddish לאַנדסמאַן (landsman). A fellow Jew who comes from the same district or town, especially in Eastern Europe."

Woody been churning out dogs lately, but he's maybe the best living American director. Comedy is harder than drama, and Woody Allen is a master.

Off the subject. Speaking of humor, and politically incorrect... finally saw Lina Wertmüller's masterpieces 'Swept Away' and 'All Screwed Up'. She's f%$king great! You should interview her. She's 85 now.

We're on different wavelengths. If Woody Allen is the best living American director what does that make Scorsese, Dante, Demme, Corman, and dozens more. As for Wertmuller, if you're idea of entertainment is a Marxist version of "Gilligan's Island," God bless you!

How did Corman slip in there? I certainly don't like anything Woody does now, but he writes and directs his films, and that's quite a task. His 70-80's output was pretty amazing. As for Scorsese I really enjoyed Wolf and Casino, yet nothing in between. It's a good question though, who is the greatest living American director?

How did Corman slip in? He's a tremendous director and when last I checked, still alive. The greatest living director is Godard. I'll have to think about the best living American director. Is Arthur Hiller still alive?