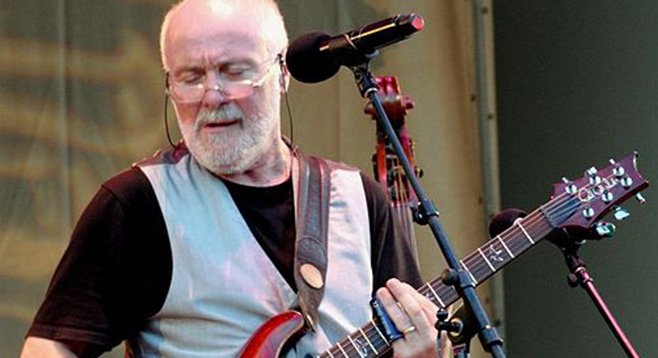 “I know that, when with Fleetwood Mac, we played San Diego back in the late ’60s, but I don’t remember much about it, except it was in a large hall of some kind,” says Jeremy Spencer, whose blues-based guitar anchored the original Mac from 1967 until his mysterious departure in 1971. “I have briefly visited a few times within the past 20 years, though, usually in transit to somewhere else. It seems like quite a progressive city with an interest in the arts and culture.”

Having vanished in the middle of Mac’s 1971 tour to join a religious order called Children of God (aka the Family International), it’s been 43 years since Spencer toured the U.S. His February 14 date at Lestat’s is the third stop of a cross-country tour running through March. “It’s daunting,” he says. “I was not anticipating it to be so many, but I am committed to doing the shows that are securely booked.” He’s hoping a Kickstarter campaign will help. “It’s funding a portion of the tour, but it won’t cover all the costs associated with touring, plus pressing and releasing a new album in these times. They’ve changed. But it’s certainly a help.”

Spencer recorded two solo albums in the ’70s, as well as in 2006 and 2012. This tour is mainly intended to showcase his newest, Coventry Blue, notwithstanding all the advance press touting his Mac pedigree. So, can attendees expect many songs from his tenure with that group? “Some, even though the ones I recorded with them are maybe not as familiar to the public as the hits.”

Asked about Mac tunes he wouldn’t play, Spencer says, “Usually the ones that I had nothing to do with musically, because I would feel opportunistic by including them. Or if it has a message I no longer feel comfortable with, even if I recorded it years ago. An example would be ‘Somebody’s Gonna Get Their Head Kicked in Tonight.’”

Tracks like that predate his devotion to the religious order he joined in 1971 and is still associated with. “Strange as it may sound, I think most, if not all, of my material is informed and inspired by my beliefs. Even the funny send-ups and racy ones. ‘Devotional’ does not always have to mean grave or pious.

“I believe God has a sense of humor, and I’m proof of that!”