Pickleball vs. tennis in La Mesa

Players raise issues of court use and conversions 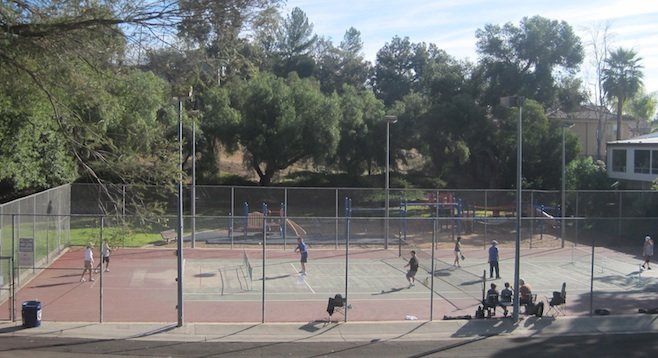 The La Mesa Community Services Commission on January 29 denied the USA Pickleball Association's request to remove the tennis court at Collier Park and replace it with four pickleball courts.

Pickleball was created in Washington during the 1960s and is named for the creator's dog Pickles, according to a report from Mike Pacheco, the city's community services manager. The game is played with a wood or composite paddle and a perforated plastic baseball similar to a whiffle ball. Players use a net lowered to 34 inches at the center.

Pacheco said conversion would cost $13,500; an estimate consisting of $3500 for court resurfacing and $10,000 for the courts. Private funding would be required because the only money budgeted by the city was $1000 for replacing tennis nets.

Commissioner Patrick Dean cast the only vote against the motion that denied the request to install courts with permanent nets in the park located on the 4400 block of Palm Avenue. "Four pickleball courts would get more use for the city with an aging population," he said.

The commission vote called for resurfacing the court and formation of a committee consisting of tennis and pickleball players to explore shared use of the court. Their vote followed more than an hour of public comment by 23 speakers about the issue that brought about 100 people to the hearing.

Pacheco said the city council in June 2012 approved a parks master plan. That September, the commission asked city staff to add programs to Collier Park to attract more users. The city contacted the association, and portable pickleball nets were set up that month from 8 a.m. to noon on Mondays and Wednesdays; the following September, the city added pickleball play on Fridays from 8 a.m. to noon.

The morning of January 29, two nets were set up for people playing pickleball. At the evening hearing, tennis and pickleball enthusiasts spoke about the popularity of their sport and said their presence encouraged other people to feel safe and visit the park.

Michael Blakesley said emergency medical technicians told him they saw people using heroin. The park was a "cesspool. That changed with pickleball."

Mark Smelko referred to the request of a "private enterprise taking over," saying he teaches at Monte Vista High School. "Kids play tennis, not pickleball."

Justine Frazee disputed the "private designation," saying donations were requested to replace nets and balls. She and her husband, Jim, are the association's San Diego East County ambassadors. He recalled that in 2012 "there were homeless people [and] girls wearing sketchy clothes" in the park.

Gary Crossland said, "Pickleball is the fastest growing sport" in the nation. Mike Carpio said he could no longer play baseball. "No matter how young you are, you can play pickleball. I'm 80 years old."

Steve Serna said he taught his son to play tennis. "I hope my grandson will [play]. I'm saddened to think there might be an elimination of the court."

Luke Serna said the city is working on the Collier Park park master plan and suggested adding a court for "simultaneous use."