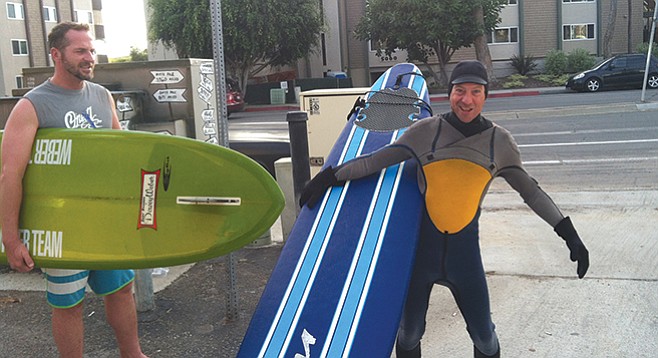 While Southern California is full of great surf spots, there still are not enough, considering the size of the surfing population. This can cause a lot of stress in the lineup. Most (if not all) of the surfers know each other at the most popular surf breaks. While everyone knows about the aloha spirit and that the waves belong to all of us, in reality surfers can be aggressive to any new surfers who try and break into the lineup. I asked my friend Josh Hall about how a new guy can get into the lineup and his answer was, “You have to pay your dues.” This started me thinking about exactly how does one go about paying dues?

Surf breaks can be categorized by several different factors. Each characteristic of the break decides what is required to be allowed into the lineup. Some breaks have a lot of peaks, which allows several surfers to be on the same wave with enough distance between them to be safe (like Pipes at San Elijo). Some are really just a one- or two-takeoff spot, which only allow for one surfer going left and one surfer going right. The great and well-known surf break at Windansea in La Jolla is like that. But that one peak is absolutely “worth fighting for.”

You have to surf the same break every day, or the nearby break. If Sunset Cliffs isn’t going off, everyone will be at Ocean Beach. So you surf there, too. If Windansea isn’t working, most of those guys go to the Shores (La Jolla Shores), where there might be something to surf. The goal is to reach a point when the regulars recognize you and know that you play by the rules. 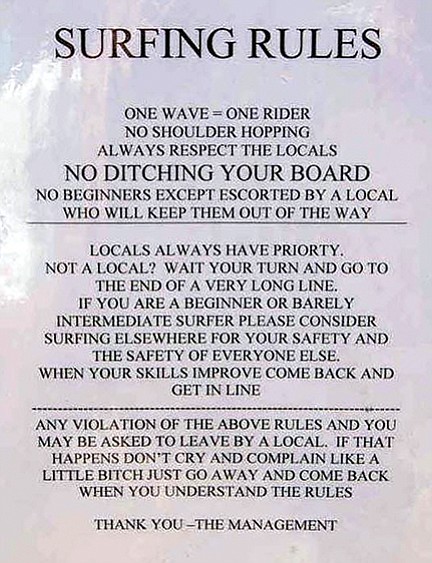 You have to pay your dues, Barney.

Paying your dues means that you don’t wear a leash. What? At P.B. Point, if you lose your board it goes into the rocks. But that is what they mean by paying your dues.

Just because you know someone who regularly surfs the break doesn’t automatically get you a “bye” into the lineup. Being a regular surfer at Tourmaline does not give you rights to surf at P.B. Point. But it is a start. It depends on the size and quality of the surf as to whether you are welcome or not. On a small day the regulars are not out there so anyone is welcome. That is a good time to learn where the rocks are, and how to avoid them.

On a medium day, a few stragglers might be able to catch a few waves without being totally abused (verbally) by the most local regulars. But on a big surf day it is probably a good idea just to stay away and let the regulars have it to themselves.

You can always surf any break if no one is there. This works great on rainy and stormy days. The wind and choppy waves usually ruin the surf. But it is a good time to learn how the waves break and where the rocks are. Checking out a surf break on a small day at low tide is a good idea.

No matter what you do, there is always at least one loud-mouthed jerk. If you know you are being courteous and following the rules, ignore him. Some of those guys have serious mental issues and yell at everyone.

Remember the aloha spirit. The waves belong to everyone. But keep in mind that there is protocol at the best breaks. Learn that protocol before you grab your board and head out to the big surf.

Please tell me this is not the same kook from Swami's that I did a story on back in March.

BTW Russell, for a old guy that wants to go out for the first time in 30 years, where would you suggest one start? And don't say stay home. THX