Her hands and arms were covered with bluish-brownish pesticide 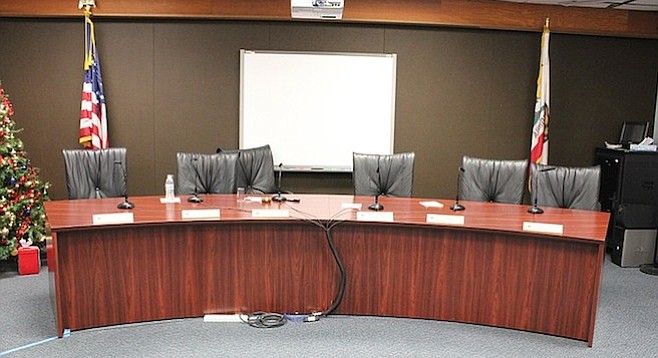 After more than two hours in closed session on Thursday, December 18, the San Ysidro School Board President, Antonio Martinez, announced “… by unanimous vote to authorize a substitution of counsel be filed in the Ruiz vs. San Ysidro School District lawsuit.”

Martinez said that Currier & Hudson would now represent the district in this particular case. The firm replaces Stutz Artiano Shinoff & Holtz who, according to a November 2014 Union Tribune article, charged the district more than $35,000 in legal fees for the Ruiz case.

Jason Turner, the attorney representing Cynthia Ruiz, waited at the San Ysidro School District Education Center for board members to return from the special meeting called by Martinez after two new trustees were sworn into the board just last week. Turner filed the complaint after Beyer Elementary School teacher Josephine Hamada took her students outside. When she went to pull some weeds, her hands and arms were covered in a bluish-brownish pesticide. She brought her class back inside, but shortly thereafter Cynthia Ruiz’s son allegedly complained of feeling sick.

The plaintiff in the Ruiz case wants the San Ysidro School District to comply with the Healthy Schools Act, which requires that public schools give notices to staff and parents about pesticides they are going to use.

“We’re not asking for a dime in damages. We just want compliance and verification of compliance,” Turner said. The lawsuit has been in litigation for almost three years.

Buzz Fink, co-managing member of EcoBusiness Alliance, also waited in the Education Center for an update from the board about his company’s lawsuit. Board members, however, made no announcement on the EcoBusiness litigation, which district attorneys sent into appeal after EcoBusiness won $12 million in damages. The Stutz Artiano Shinoff & Holtz firm represented the San Ysidro School District and lost even as, according to invoices the Union-Tribune obtained, the law firm received over $1 million in attorney fees for the case.

Buzz Fink said, “We’ve offered to sit down and build the system and offered them a solution that will get them out of everything. We’re just waiting hopefully with a new board that they’re able to listen.”

EcoBusiness started on solar panel engineering for the district schools when allegedly the husband of a former San Ysidro board member asked Fink’s partner, Art Castanares, to buy him a house. Castanares refused. Thereafter, the San Ysidro School District cancelled the EcoBusiness contract. The company then sued the district for breach of contract, claiming a ‘pay-to-play’ environment.

“With the new board being in place, we’re going to give them one last chance because they’re on the appeal. Once the appeal is done, which will be this next summer, once we get into the appeal and we’re starting to spend money, then we’re just going to run the gamut,” Fink said.

When asked if board members knew about his offer, Fink said, “I do not know if they’re aware of the offer right now. That’s why we came down here, is to communicate it to them.”

Norah G Fon: "Pest control products represent NO THREAT to children since they are scientifically-safe and will cause no harm" Are you kidding me? If pesticides cause no harm then they won't kill pests either. I suggest that you drink/eat your "cause no harm pest control" products and we will see if they cause harm or not.

Norah, it absorbs through the skin as well. The schools do spray pesticide regularly and are supposed to send notice to parents! Some schools understand that and some don't.

Don't know much about this specific pesticide issue, but it's good news that the law firm is being replaced. All the other school districts employing this firm should follow suit.