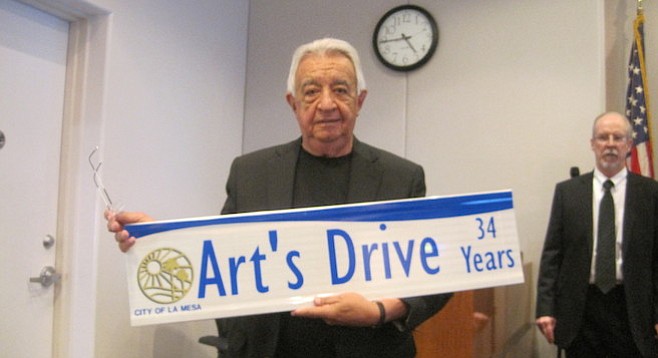 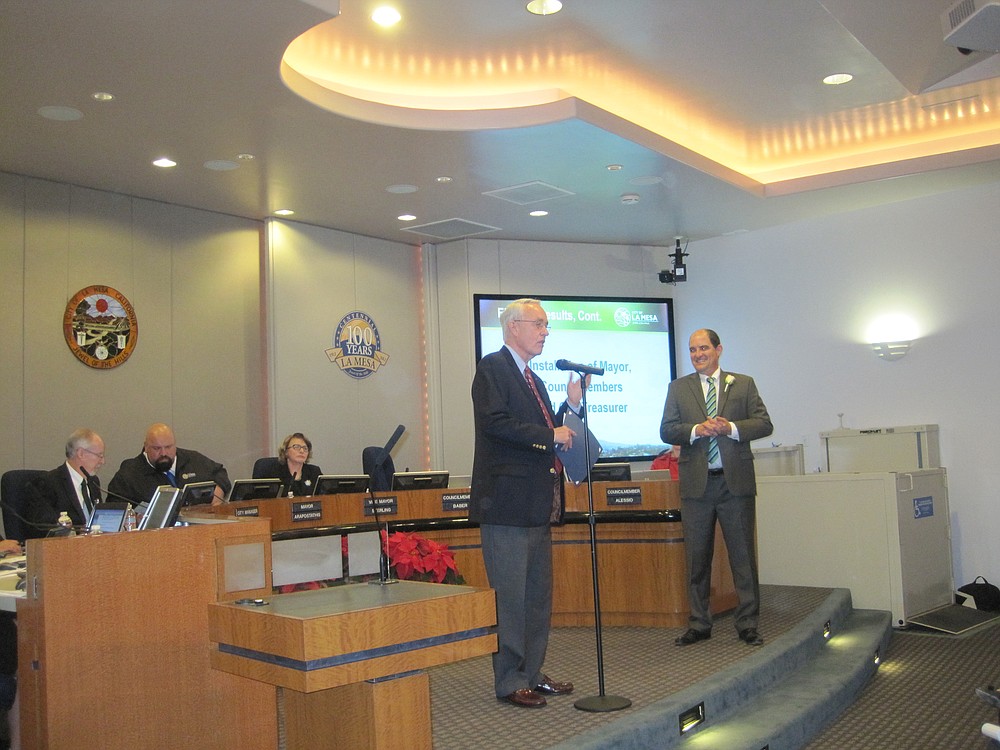 Madrid gave the invocation, saying the "recurring theme" he heard at council meetings was "the discrepancy between words and deeds." He quoted Cory Booker, the New Jersey mayor now in the U.S. senate. Booker's statement began, "Don't talk to me about your religion; first show me how you treat others." 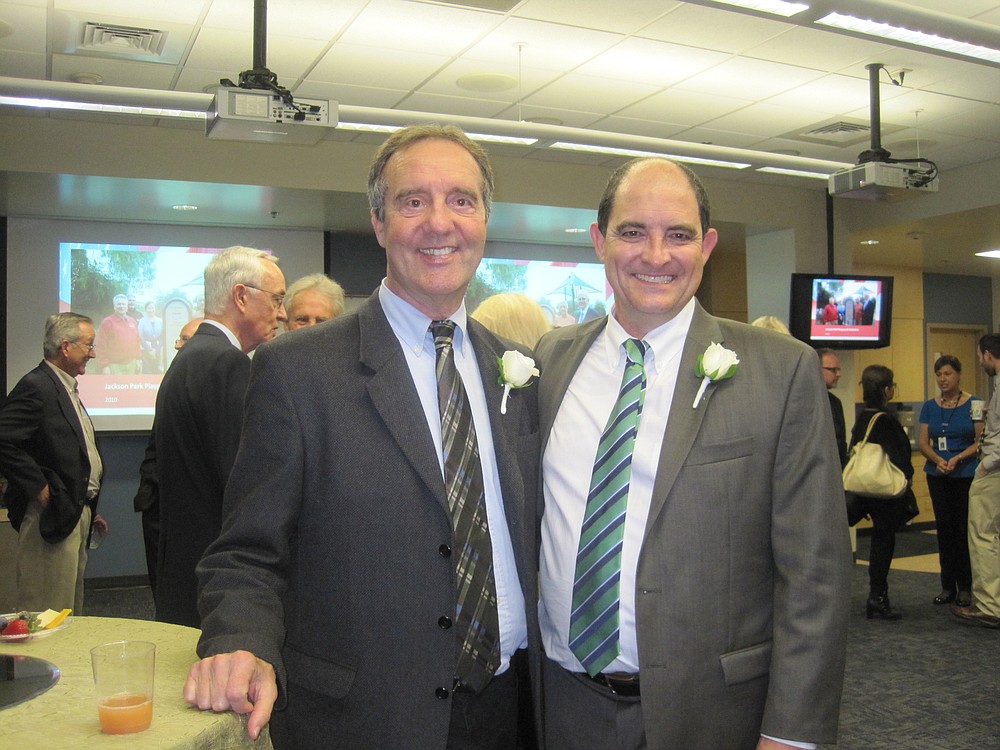 Vice mayor Ruth Sterling shared Madrid's Christmas card message, which was displayed on a screen behind Arapostathis. She read the message that started, "After 24 years as La Mesa's Mayor, I want to express my sincere thanks and gratitude for all that you have done to sustain and enhance the excellence of the City of La Mesa." Sterling said, "Your commitment has been a historical part of La Mesa's growth. That's quite a legacy."

City manager David Witt presented the street signs. Ewin's read "Ernie Way — 18 Years." He served on the council from 1985-1990 and from 2002-2014. Ewin mentioned Madrid in a list of elected officials who helped the city. He concluded by reciting the lyrics to the Roy Rogers show theme song "Happy Trails."

Madrid's sign read, "Art's Drive — 34 Years." He served on the council from 1981-1990 and as mayor from 1990-2014. Madrid said, "We come into this world with expiration dates," and his date "for serving the community" expires "in a few minutes." He said his achievements included providing leadership to help change "Fletcher Parkway from a flood control channel to a successful business center," the downtown Village, and a $20.5 million general-fund surplus. Madrid said he would leave at the break "to avoid distractions." 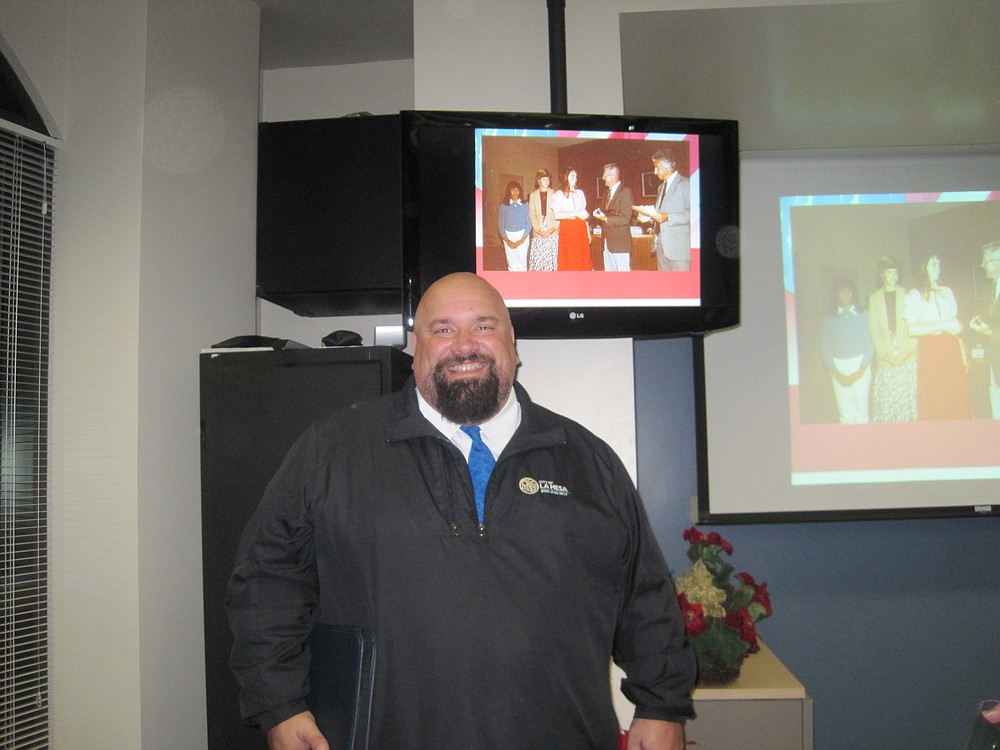 Mark Arapostathis at reception (with slideshow of city councils in the background).

After the break, Arapostathis was sworn in by his friend, Father Christopher Flesoras, pastor of Saint Anna Greek Orthodox Church in Roseville. Flesoras noted that Booker paraphrased St. Augustine.

City clerk Mary Kennedy swore in McWhirter and Vogt. McWhirter, a retired insurance company owner, said he hoped "filling up the chambers is a regular occurrence."

Before swearing in Baber, Murphy said Baber worked in his mayoral office for 4 ½ years and served as his 2000 campaign treasurer. Murphy said Baber's young daughters appeared on a campaign brochure. "I only won by 169 votes; most people give the credit to Bill's daughters."

Baber, an attorney, wrote the three consecutive term-limit ordinance that voters approved last month. He spoke about the ordinance and said, "When you think life gives you a clock and it's ticking, you have to move expeditiously."

Bookstore owner Craig Maxwell was the only speaker during public comment. "This is a council we can work with," he said. "You have 12 years; focus your energy."

In other action, councilwoman Kristine Alessio said she joined in the SANDAG board vote appealing a Cleveland National Forest Foundation lawsuit.

Sterling asked if she polled the council before voting. Alessio said, "No," leading to discussion between the two. Sterling said, "That was one of the chief complaints that was presented to the mayor" (Madrid). She later said, "Art was crucified over and over again for not bringing something forward" to the council before acting.

Arapostathis didn't comment, and ended the meeting by saying he recognized "the work that Art Madrid did" and "the advice and council of Ernie Ewin."