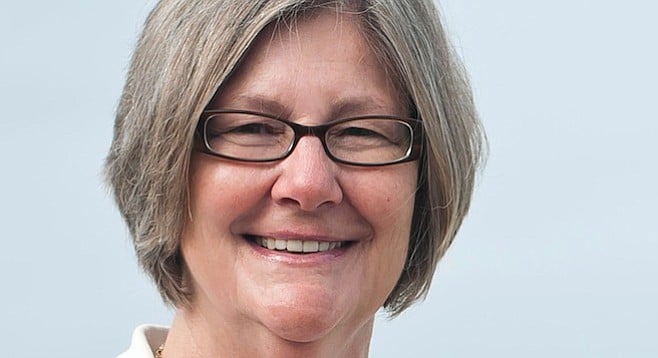 If past campaign cash is an indication, some of San Diego's most prominent lobbyists and special interests aren't disappointed by the ascendency of Democrat Sherri Lightner to the presidency of the San Diego city council, though they didn’t appear to be overly unhappy with her predecessor. 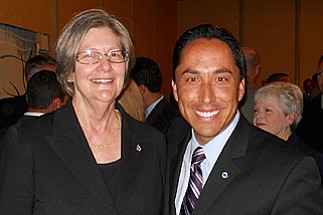 After several weeks of behind-the-scenes maneuvering, Lightner won the council crown away from fellow Democrat Todd Gloria Wednesday. Before the 7-2 vote to elect Lightner, she voted with the council's four Republicans to deny Gloria a third year as president.

Among her prominent financial backers have been members of the downtown law and lobbying firm of Sheppard Mullin, which has long fielded a small army of influence peddlers to the benefit of its deep-pocketed clients.

During Lightner's successful re-election bid against Ellis two years ago, Sheppard Mullin's James Mittermiller organized a fundraiser that netted $5669 for her campaign, according to an amended disclosure filing the firm made months after the election was over.

Since then, lobbyists working for Sheppard Mullin have been in touch with Lightner on behalf of an array of its top-dollar clients — including a contact by Mittermiller for Dr. Paul and Barbara Hirshman of La Jolla, who were seeking "enforcement of Neighborhood Code Compliance involving noise violations by a neighbor," according to a June disclosure report. The law firm reported picking up $30,000 for that assignment.

In addition, the firm's Donna Jones has been representing D & D Cooperative regarding "approval of [a conditional use permit] for medical marijuana facility to be located at 3430 Hancock Street." The third quarter tab was a reported $4,000.

Other Sheppard Mullin-represented influence seekers include home building giant Pardee, which paid the law firm $54,000 during the third quarter of this year, and whose executives gave Lightner $4550 in 2012.

Ryland Homes forked over $6000 for lobbying about development in Scripps Ranch. And developer Donahue Schriber paid the firm $70,000, in part to oppose Kilroy Realty's controversial One Paseo development in Carmel Valley, the filing says.

As reported here by Dorian Hargrove in May 2012, Lightner was a major beneficiary of Kilroy's campaign funding largesse, getting a total of $2500 from the company’s bigwigs.

During the same period, Donahue Schriber executives came up with a total $1800 for the councilwoman's re-election, city records show. The project's ultimate fate awaits a future council hearing.

Another pillar of Lightner campaigns has been the trio of hotel moguls who control much of San Diego's subsidized tourist agenda by virtue of their role as board members of the city's so-called Tourism Marketing District.

Republican stalwart Terry Brown and his cohorts at Atlas Hotels, Inc., came up with a total of $1375 for the La Jolla Democrat’s successful 2012 re-election bid. Three individuals associated with Bartell Hotels, owned by Brown's fellow board member Richard Bartell, gave a total of $1500. And Evans Hotels' employees, run by Brown and Bartell's board colleague Bill Evans, produced a total of $3500.

Evans Hotels has also been a funding mainstay for vanquished council president Todd Gloria. In addition to campaign money, the company's chief financial officer Robert Gleason, a member of the airport authority board of directors, has supplied the Democrat with tickets to various brunches.

When the hotelier-controlled marketing district sued now-fallen Democratic mayor Bob Filner over control of funds derived from tourist taxes in 2013, it came to light that Gloria and Gleason had signed the election petition of the judge in the case, ex-Sheppard Mullin partner Timothy Taylor, who denied he knew the pair and declined to recuse himself. He ultimately ruled in Filner's favor.

Sherri Lightner's ordinary-citizen constituents wish she were as responsive to their calls and concerns as she seems to have been to the deep-pockets guys, but these days all Dems seem to bend over for the big boys just the same as the Reps. In this, Dem Lightner merely follows the example of flamboyant aging whippersnapper Dem Todd Gloria.

Lightner is a DINO and you need not worry about the "ordinary-citizen constituents as they will continue to vote for her while she panders to the donor class.

Just because she's not a Leftist pawn doesn't mean she's a DINO.