Are you Santa enough? 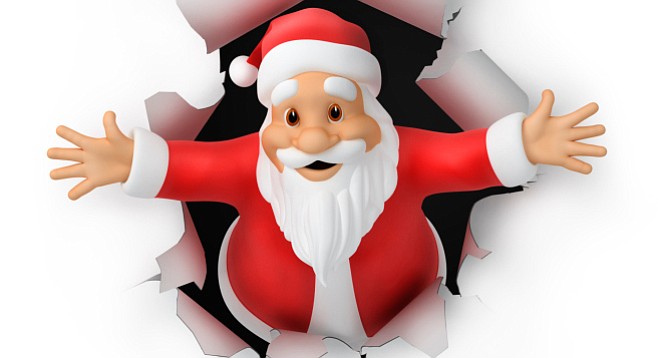 Craftsmen at the Planet Rooth Design Haus make heirloom-quality furniture out of reclaimed wine and bourbon barrels. Elegant in the way that overstuffed classic American furniture will never be. Sturdy and well crafted, unlike Ikea-style modern decor. Most importantly, it’s extremely beautiful. Prices begin at $325. That’s solidly in “splurge gift” territory for most holiday shoppers, but think about similarly priced items: PS4’s and iPad Airs are doomed to obsolescence. Jewelry tends to get locked away. Tchotchkes and knick-knacks come and go, but heirloom furniture is, if not forever, at least useful every day, and for a really long time.

Like bars? Got a Santa suit? No? How about a Krampus costume, elf getup, snowman gown, Christmas-tree uniform, or giant walking candy-cane livery? Any fun or senseless Christmas-themed gear will do. But, SantaCon San Diego isn’t a cutesy Santa festival, it’s a pro-level bar-crawl along a route that will only be released via Twitter (@SanDiegoSanta). Full Christmas apparel is mandatory, so don’t go showing up wearing a novelty Rudolph nose. You’ve been warned. Are you Santa enough?

For some of us, New Year’s Eve has two traditions. Drinking (obviously), and American-style Chinese food. Wong’s, and the attached Golden Dragon bar, serve both. The trickiness of NYE Chinese is that we don’t want haute cuisine or trips to Kearny Mesa for more “authentic” fare. We want salty lo mein and sticky-sweet kung pao chicken. We want scallion pancakes loaded with mu-shu pork. We want egg rolls, wontons, rangoons, and everything stuffed and fried. We love takeout, but we promise we’ll take an Uber if we party too hard at the Dragon Room. Sincerely, New Year’s Revelers.

Neighborhood residents go bonkers with illuminated Christmas decorations all along Oviedo Street and the surrounding neighborhood. Nearly everyone is in on the fun, with about 200 houses participating every year to light up the December night. If you forget your hot chocolate, chances are someone will be selling some along the way. Traffic can get congested on the neighborhood streets, so it’s a good bet to park the car and navigate Christmas Card Lane by foot. The lights go on at dusk, and residents usually cut the power by 10:00 p.m. so everyone can get some sleep.

Worthy of a Bavarian Christkindlmarkt

As a rule, Germans love Christmas and know how to celebrate the holiday with festive vigor. O.B.’s German restaurant of record gets into the spirit by running a menu worthy of a Bavarian Christkindlmarkt (look that up) during late-December. Two words: spiced wine! Not every day, but, at Christmastime? Yes, please. Dishes such as roast goose, sauerbraten, and lobster thermidor have graced menus from years past, and this year’s Christmas Eve dinner will probably fill up early, so reservations are all but mandatory. It’s not cheap, but save cheap for the other 364 days of the year.