Large turnout at forum includes crime-fighters who get mixed reviews 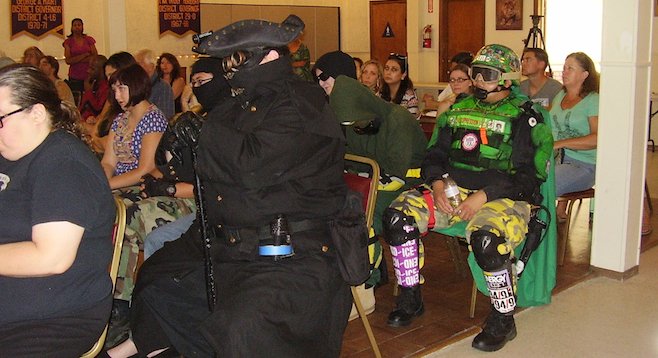 Saturday, August 30, the Xtreme Justice League showed up at a North Park informational forum pertaining to the six recent nighttime attacks on women.

Along with at least three costumed colleagues, "Mr. Xtreme" attended the meeting and invited the group to participate in self-defense classes the group is putting on next week.

"We have been out there patrolling the streets almost every night," Mr. Xtreme said. He urged others in the community to get involved with patrols. "All the outrage in the world is not going to matter if you're sitting on your couch," he told the 120 people who assembled at the North Park Lions Club. "You don't have to be as eccentric as we are to do some good."

Not everyone was charmed by the masked justice-seekers, including a woman who challenged the group to work without their superhero-esque costumes and masks.

That was the central question at the meeting: who is the bad guy or bad guys who've been blitz-punching women from behind in North Park (and one in Normal Heights)? In more than one of the attacks, the suspect reportedly tried to pull the pants off the victim.

Cops now have a video of a person of interest from the most recent attack on August 28 and they've posted it everywhere. Capt. David Nisleit told the people at the meeting that they should "walk with situational awareness and do not walk alone."

"The greatest force multiplier is you, the community," SDPD chief Shelley Zimmerman said.

Hey, let the characters come out. Cosplay, ComicCon, Dancing ballerinas, who cares? Attacks don't happen when there are witnesses on the streets and the cops can't be everywhere. Somebody give them donuts. (the characters, dummy!)

Video is the new equalizer, since CA does not have open carry gun laws. The more monitored video camera's that are being used around NP the better, since when people are being videotaped they act nicer.

Since the SDPD and the State ABC are allowing ever more late night clubs, drinking venues, stores, etc. to serve and/or sell alcohol until 2AM if not later, NP is rapidly becoming like Pacific Beach, which is known as the most crime ridden part of San Diego!

All women have a right to be fearful, since they are at a distinct disadvantage to men when it comes to physical conflicts, unless they are very well trained and even then, if the attacked has a knife or other weapon, training becomes less of an equalizer.

NP needs more street lights, linked video camera and enhanced enforcement or ever more customers will simply choose to party and/or live somewhere else that is much safer.

All those business that are raking-in huge profits need to step up and do it quickly or they all will see their bottom lines plummet if everyone, not just women don't feel safe to walk NP after dark and BTW: these same big Businesses should also pay to clean up after their patrons without trying to make local residents do it for them in some form of additional maintenance district that shifts the cost to residents who are not profiting from these late night business!

If NP is not Safe & Clean, then it is no longer a great place to live or work.

You seriously blame night clubs and liquor stores? You're free to move to Utah or a "dry county" in Texas if you really believe that'll make you safer. But restricting everyone's freedom because the bad guy just might have had a drink or been to a nightclub before committing his crime is assinine.

Superheroes are supposed to have super powers and, while it looks like these guys are professionals, I doubt that overeating is considered a super power in any comic universe.

It is possible they would be taken seriously if they left the costumes at home and patrolled the streets as human beings instead of cartoon characters.

Let's all ask the Sheriff why, for decades, the basic human right to self-defense is not to be permitted to San Diego residents.

The police have no duty to protect you. They can, very literally, see you being attacked, and just walk or drive away, and there is nothing that can be done against them. And if the cops aren't right next to you when an attack happens, all they can do is take reports and collect evidence to maybe build a case that maybe the DA will accept and might be prosecuted and might result in a conviction that might result in a meaningful sentence that might not get AB109ed down to nothing in a few weeks.

Self-defense classes are a good start, but will not let a 110 lb. woman successfully fight off a determined or enraged 200 lb. male assailant, especially one with a history of violence. Pepper spray might work. It might not. A gun and the training to use it correctly is always your best last line of defense. That's an option that's available to most Americans, and even a lot of Californians... just not San Diegans. And that travesty needs to end.