You didn’t hear about the convention because they behaved 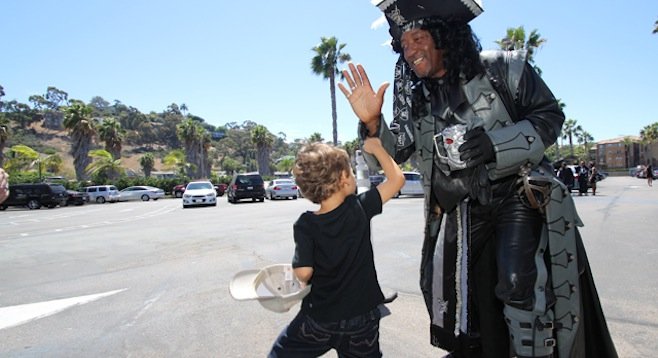 Soon after exiting the 8 freeway off Hotel Circle on August 23, you could hear, “Raaaiiiiiiiders, Raaaiiiiiiiders.” Oakland Raiders flags, banners, and decals were plastered over the majority of the cars in the lot.

The day before, the Raiders had lost to the Packers, but that didn't stop the fans from turning the Handlery Hotel into the “Black Hole” of San Diego for the weekend. Even in the parking lot, fans were just chilling on lawn chairs and tailgates catching the breeze.

"The security guard refused our tips,” said Michael Sommers, the founder of this Raider fan convention. “He said this was the easiest shift of security he has ever had.”

I validated this by witnessing a group of fans wearing Raider shirts, huddling and taking selfies with the security guard by a large 4X4 truck. The monster-size Ford Excursion was lifted almost two feet and contained 17 TV screens inside the silver-and-black interior.

I then spotted the "F--K the Haters" insignia embossed on the transmission case and the gun welded to the trailer hitch. I flinched as Sommers kneeled into my zone. "Let’s cruise on inside,” he said.

I tailed him to the swimming pool, which was surrounded by blackshirts and their children swimming. A woman walked up in a black leather dress with knee-high motorcycle boots, a pole decorated with skulls, bones, and beads, and a Mardi Gras–style mask that covered up her silver-painted face. 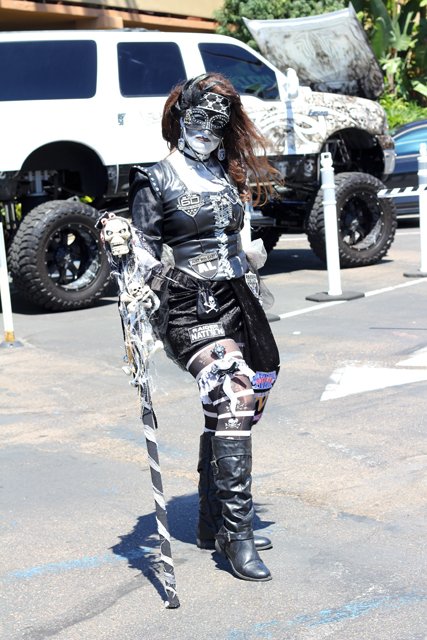 "Her real name's Mary Carpenter, by the way.” Sommers pointed out other characters roaming the hotel grounds — only 4.1 miles away from the Chargers’ Qualcomm Stadium.

I asked Sommers in a joking manner, “Don't you think this venue is sacrilegious?"

"We have this gathering because we love to get together and support our favorite team. It’s about the kids, the entertainment; it’s all about love….

“We've been doing this for six years years in the Bay Area and this is our second year here in San Diego. We haven't had one incident at my venues yet.”

A man dressed in a gorilla outfit with enormous Mardi Gras beads then walked up to Sommers and tapped him on his back. "That’s my cue. I have to go. If you need anything else, Mike, I'll be next-door coaching the paper, rocks, and scissors tournament.”

In the hallway, a vendor going by the name of Kraftygirls Kreations was selling hair bows and BBQ aprons decorated in Raider fashion, and across from her was a gentleman selling signed football memorabilia — including a Jim Brown jersey for $300. As I took snaps, I noticed the vendors’ wads were pretty thick.

A tall man with dreads walked past me, toward the entrance. He was fixing his eyepatch, and I caught a glimpse of his eye with a silver contact lens. His name is Oaktown Pirate. My apprehensiveness diminished at this point as I saw a small boy jump up and give him a high-five.

His real name is Azel Grasty, and he's been dressing like this since 1997: large pirate hat with lace trim, embossed leather black-and-silver trenchcoat with silver shoulder accents, ruffled shirt, and a sword and skeleton-face mug. Without any words, Oaktown Pirate held up his mug, approving my coverage of their weekend gathering.

I walked into the main hall where the majority of the 350 people were present. The DJ on the mic energized the crowd by playing a song called "Raid,” by Lakeside. The people were chanting, "This is a Raid, everybody Raid the dance floor. Raid, party people, let me hear you shout.”

A lot of the attention was directed toward a fan in a wheelchair going in circles doing Facetime on his iPhone.

Sommers signaled me over to the corner where he was talking to 2002–2003 Raider running back Charlie Garner. A line of 12 fans was waiting to get Garner's autograph and photo.

"I just got my purse signed by Charlie!" yelled Rachel P. Hope Witteman got her shirt signed shortly thereafter. Both drove in from Temecula.

The Raiders’ lead NFL rusher (as a running back) in ’02-’03 was signing autographs for free this day, despite his autograph fetching up to $24.05 on eBay the month before.

I then leaned over to the star and asked what was the craziest thing that he signed that day. He responded, "No Comment,” and continued to take Instagram shots with the many Raiderette-dressed fans.

"Take photos of all your friends here, hashtag #RFCSouth on your phones right now, and tag your friends that are not present here with us,” said Sommers on the mic. The whole room lit up with everyone’s flashes.

"All the money that gets taken at the door goes back to the next Raider convention,” Sommers told me. “We are non-corporate, all grassroots, with word-of-mouth and social media helping us.”

Sommers also mentioned that he has a partner in Oregon and buddy named Sawed-Off here in San Diego that help.

"It’s a lot of blood, sweat, and tears for us, with minimal profit, but it's not about the money for us. Win or lose, it’s all for the fans.”

To Mike, The Raider Nation, and everyone present at the RFCSouth thank you for the support, feel free to share this story on your feeds and websites!

This is Gods way of saying you have more money than you know what to do with. Low IQ people spend money on nonsense like this. Really stupid. And most Raider's fans have low IQ's, so no surprise here gangland nation of thugs.

Ponzi, your comment only reveals your shallow and judgemental views on people. The event didn't have one incident as a matter of fact the Security stated "it was the easiest and most peaceful event he has ever attended". He wouldn't take a tip as he loved working the event. In regards to your opinion of the truck- it is a fantastic truck and your view of people spending money on things they enjoy is just your opinion on what YOU think is nonsense. Basically what you are saying is if someone has bought an extra pair of shoes that is nonsense, Multi-bedrooom houses are nonsense since they don't need the extra rooms. Basically your post is ridiculous and your views childish. Thank you for reading the article, revealing your judge-mental attitude and immature lashing out at a group of people as a whole WITHOUT knowing any of them. Banding most Raider fans as having low IQ's is just ridiculous. Your comments are just laughable. As a matter of fact instead of judging, I invite you to come to the next event show some maturity and find out first-hand about the people you are judgeing.