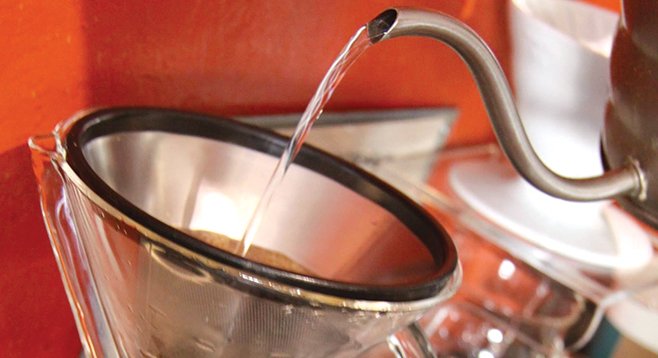 I drink coffee every day.

I probably don’t even drink water every day, or beer, or any other important beverages. But coffee gets the call, rain or shine. For a time I was content to get coffee from whichever shop was closest. But too many burnt beans and weak brews have prompted me to embrace so-called Third Wave coffee spots. These post-Starbucks places favor single-origin, locally roasted beans, made by the cup using Japanese pour-over methods to ensure perfectly consistent brews that show off each coffee’s flavor profile.

It’s an artisanal approach to coffee that has been gaining momentum in San Diego. It’s propelled by a growing number of local roasters and coffee bars catering to everyday drinkers who possess increasingly refined palates. In craft-beer terms, it’s like putting down the Budweiser and picking up an Alesmith IPA.

This is why I recently drove 20 minutes to Bird Rock for coffee. If there’s a local coffee equivalent to Alesmith Brewing, it’s probably the south La Jolla micro-roaster hailed by the coffee-industry press as being among the best in the nation.

Bird Rock Coffee Roasters (5627 La Jolla Boulevard) has been around since 2002, when owner Chuck Patton started selling home-roasted beans at the La Jolla farmers’ market. For years he roasted beans procured the old-fashioned way: through a broker. However, about seven years ago he initiated the process that sets Bird Rock apart, when he took a trip to buy beans in Colombia. In the years since, Patton says he has made more than 35 trips throughout Central and South America and Africa to purchase coffee directly from the source. It’s ambitious work for a micro, but by setting up direct-trade agreements, Bird Rock can offer single-origin beans that taste like nothing else in town.

It also gives Patton a chance to sample product. He can see where or how the coffee is growing, try to pinpoint which estate produces better flavors or fewer impurities. Some farmers in Patton’s network even reserve hand-picked crops for Bird Rock. Why is origin so interesting to coffee aficionados? Because, while blending beans from multiple sources may mask impurities, it also obscures the delicate, distinguishing flavors that allow us to characterize a coffee as tasting good in the first place.

Listen in on a serious coffee-cupping (tasting) in action and you might mistake it for a wine-tasting. You’ll hear poetic descriptions of body and acidity, the invocation of fruit, and plenty of swishing and spitting. Another term you might hear is terroir. The French word for referring to a wine’s local character has been adopted by coffee enthusiasts. What was the soil like? Which other plants were growing nearby? Such things influence flavor enough that having answers to the questions significantly impacts how you roast the bean, which greatly impacts the way that tastes.

A couple of years ago, Patton brought on Heather Brisson, previously of Caffé Calabria (3933 30th Street, North Park), to take over as head roaster. Heather’s first task is to identify the needs of each batch. She draws on experience to coax the right balance of flavor and body from each varietal, based on color, density, and how the coffee cherry was processed.

She, Patton, and the rest of their cupping team gather frequently to taste new beans roasted in a 1920s-era cast-iron roaster that sits in Patton’s office. They sip and discuss and come to a consensus what the beans have to offer, at what temperature they might best be roasted, and for how long, in order to bring out those subtle differences single-origin coffee drinkers seek.

Enjoyment is subjective, and even a regular Bird Rock customer might occasionally come across a batch that doesn’t suit his or her taste, like the single-malt scotch drinker who finds the vaunted Laphroaig too peaty to drink.

Someone accustomed to Dunkin Donuts coffee might not recognize or appreciate some of the flavors that come across in Bird Rock beans. However, Patton is banking on the idea that San Diego coffee drinkers are acquiring a taste for single-origin coffee. He plans to expand roasting operations into a larger facility near Mission Bay. Bird Rock will also open a pour-over coffee bar in Little Italy this fall, adding to an upswell of third-wave coffee shops that continue to pop up in central neighborhoods. If nothing else, this growing trend will ensure coffee addicts like yours truly will find it easier to regard ourselves as connoisseurs without having to drive across town for a caffeine fix.