Entertainment on the way for La Mesa 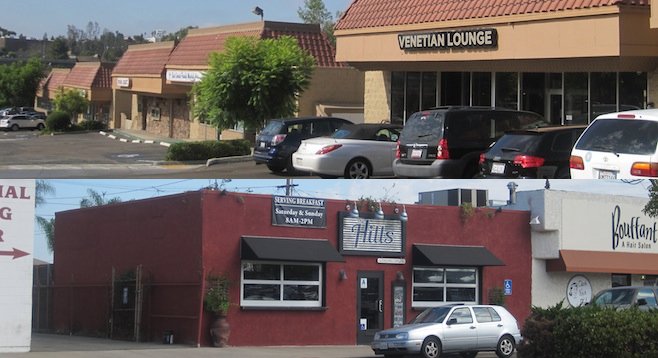 The La Mesa Planning Commission on August 20 approved conditional-use permits for "performance entertainment" at two businesses: the Venetian Lounge (a hookah bar in a shopping center on the corner of Baltimore and Parkway drives) and the Hills Pub (a sports bar and grill on the 8700 block of La Mesa Boulevard).

While the Venetian hearing included discussion about what constituted live entertainment, during the Hills hearing, residents spoke about loud renditions of "Happy Birthday." Both permits will be reviewed in six months.

Venetian Lounge applicants Eva and Waad Dano want to add a 288-square-foot dance floor and offer live entertainment from 9:30 p.m. to 1 a.m. Thursday through Saturday, for special occasions, and "major holidays like Christmas Eve and New Year's Eve," according to a city staff report.

Commissioners on May 21 continued the Danos' hearing. On August 20, they heard a report on police calls for service related to the Venetian (which opened last August) and Norma Jean's, a bar in the shopping center. There were 62 lounge-related calls and 9 for the bar for the year ending August 2014; from May to August 2014, there were two calls for the Venetian and none for Norma Jean's.

Eva Dano said security now consists of a person at the door and a private-security patrol car. In addition, "We’ve kicked out so many people. Now we have good customers."

The Danos' permit allows a DJ and belly-dancing on special occasions. Their attorney Michael Tabi said only the dancing is live entertainment. "Their cousin with a laptop provides background music."

Commissioners asked why music continued after May. Dano said she thought that music was allowed if there wasn't dancing. "If people stand up [for] couch dancing, we tell them to sit down." Patrons are advised not to move to the music "on their way to the restroom."

Senior planner Chris Jacobs said, "I think they tried to maintain the spirit of the law." When commissioner Michele Hottel asked if the music was live entertainment, Jacobs said that Macy's has recorded music.

Commissioner Linda Keene said she's heard "really good music" in the grocery store. People en route to the restroom "swaying to the music is not dancing, is not entertainment."

Hills applicant Jason Nichols opened the pub in April. He said live entertainment was allowed for the previous tenant, O'Connor's Pub. Entertainment could have continued if Nichols kept occupancy at 50 instead of raising it to 77.

Nichols said he held a meet-the-neighbors breakfast. When there were problems, his manager went "door to door to apologize. I did that [before], but I have a newborn."

Nichols applied to have entertainment until 1 a.m. Thursday through Sunday and on major holidays. Doors and windows would be closed during performances, with no "amplification devices" allowed after 10 p.m. The permit allows a 16-square-foot stage, and Nichols spoke about booking one or two performers such as "a piano guy and girl on guitar."

Janet Bautista was one of three residents opposing the permit. She testified about bell-ringing, people "screaming 'Happy Birthday,' and hollering for their favorite team."

David Birrcher said he heard the sounds but "wouldn't classify it as a nuisance." Birrcher said after moving to La Mesa, he heard karaoke at O'Connor's. "It was pretty bad."

Commissioners discussed changing the proposed time entertainment ended from 1 a.m. to 11 p.m. George Hawkins argued that it should be seen whether closed doors and windows mitigated so "music is not as offensive as the Chargers in the afternoon."

Chairman Dexter Levy acknowledged concerns and the closed-windows requirement. "I hope he has air-conditioning."

Commissioners unanimously approved the Venetian permit and voted 4-2 on the one for the Hills. Levy did not explain his "no" vote; Hawkins said he opposed the Hills’ 11 p.m. "shut-off time."