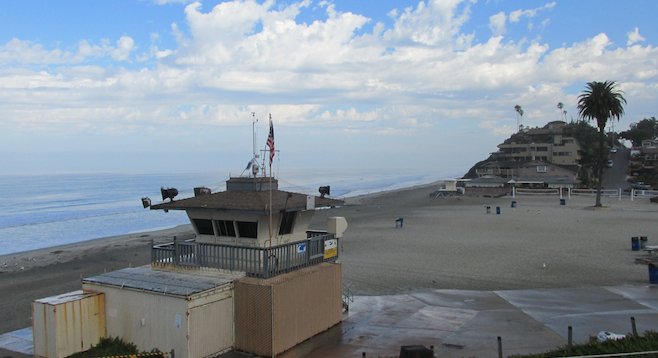 With locals and tourists trying to grab in a few more days of summer, the beaches in North County were suddenly closed to all activity on August 20.

Starting around 4:00 a.m., an incoming weather system hurled lightning and boomed thunder from Oceanside to Fallbrook. By 6:00 a.m. the incoming system had expanded to the Encinitas and Solana Beach areas and brought along rain.

At 6:30 a.m., Capt. Larry Giles of the City of Encinitas’ Marine Safety Dept. called for a closure of all beaches and beach-related activity (day-camps and surf schools). The guards at the Moonlight Beach tower saw several lightning strikes in the water. Guards went up and down the city beaches using their PA’s to advise surfers to get out of the water. Most complied, according to Giles.

Giles pointed to the recent lightning-related death of a surf swimmer in the L.A. area as the obvious reason to close the beach.

Over the course of the morning, as the lightning and thunder continued, all 17 miles of North County’s city and state park beaches, from Solana Beach to Oceanside, were closed. According to a Carlsbad Fire Dept. spokesperson, a maintenance shed at Carlsbad State Beach was hit by lightning and lifeguards quickly put out the small fire that ensued.

A little before 9:00 a.m., the incoming cell that reportedly was to be more severe than the morning system, dramatically shifted to the south. Dark clouds could be seen heading in toward La Jolla and Pacific Beach.

Earlier this morning, the National Weather Service declared a flash-flood warning, in effect until evening hours, for northeastern San Diego County, the mountains around Idyllwild and Big Bear, along with the high desert areas of Apple and Lucerne valleys.

Capt. Giles said in all of his 27 years lifeguarding North County beaches, he had never seen a summer “weather threat” this active, with as much lightning hitting the ground. He also advised that water quality will be diminished over the next few days, due to the rain runoff.

Thumble and lightning at La Jolla Shores also sent Menehune surf campers to the Scripps Oceanographic Aquarium this morning -- not a bad substitute to watch the octopus getting fed. It's tough to be a kid growing up out here....