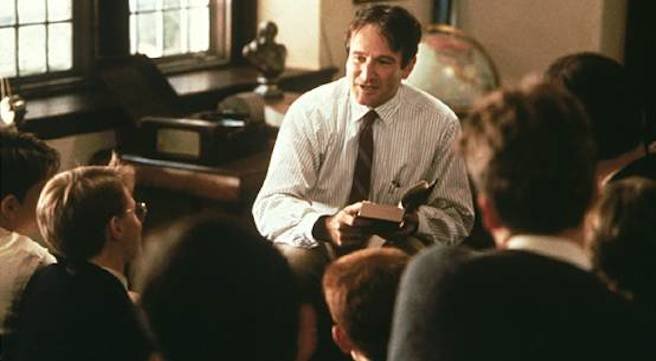 Most everyone has had their say already about the death of Robin Williams. I don’t have anything to add about the man, except to say that he helped to shape, as much as Jack Benny or Groucho Marx, my notion of what comedy meant.

As I am fond of telling my co-critic, Mr. Marks, usually when he looks at me pityingly for making a Star Wars reference, you don’t get to choose your childhood loves. You encounter things in your impressionable youth, and they make indelible marks upon the soul. It’s folly, or at least foolish, to attempt to eradicate those impressions later in life just because you happen to realize how ridiculous Luke Skywalker sounds when he whines about going into town to pick up a couple of power converters. Was Raiders of the Lost Ark a cornball salute to the old cliffhanger serials? Not to a boy who had never seen a cliffhanger serial. It was just pure movie heroism.

Robin Williams falls squarely into that category. I saw him for the first time in 1986 on Saturday Night Live; edgy stuff for a 13-year-old in Upstate New York. Friends at school repeated the saltier bits from 1986’s Live at the Met (we didn’t have HBO). I was gobsmacked by his performance on the soundtrack for 1987’s Good Morning, Vietnam (couldn’t see it; rated R). I had never encountered that kind of free-association comedy, the sort that made you feel like the man was struggling to keep up with his own brain. Groucho was quick, but always in control. Williams teetered, and it was thrilling to hear.

Then Dead Poets Society came out in 1989. I was 16, basically the same age as the kids in the film. I wrote poetry. I acted in Shakespeare plays. I was defenseless against the warm appeal of Williams’s off-center English teacher. I didn’t go around shouting “carpe diem,” afterward, but I did watch the movie again and again until I could get some distance from it, make some judgment about the characters and their choices. I’d never had to do that before because I’d never been so completely won over. It’s a remarkable thing for one human being to have such a profound effect on another through a movie screen, and I am grateful for it.

I saw an unknown Robin Williams perform at the La Jolla Comedy Store in the late 1970's, just as "Mork and Mindy" was getting started. Robin was all over the room, impersonating a Russian wearing a cylindrical fur hat. It was hilarious magic. RIP.

Some junior high buddies and I snuck in to see "The World According To Garp" because it had Mork in it. Most of them left about 20 minutes into the film but I stayed and enjoyed the film. Still my favorite Robin Williams movie.

Between 1987 - 1989, I was an unabashed fan of Robin. "GMV", "Dead Poets", and "A Night At The Met" were all released during this time. One special night - October 19th, 1991, Johnny Carson had Robin and Jonathan Winters on the same show. I have the near complete show on VHS still; the YouTube video below is only a fraction of what was shown.

That same year, Robin fell out of favor with me for appearing in "Hook". I tolerated him from then on. I was forced to watch "Patch Adams" on a dinner/date with another couple and my wife. I was doing my best impersonation of George C. Scott - "TURN IT OFFFFFFFF!!!"

A YouTube video once existed of Robin on various talk shows (i.e. Regis & Kelly, The Today Show, Leno, Letterman) around this time. He did the exact same jokes and the same manic schtick on each show. So much for Mr. Inventive and Original.

Jonathan Winters was the master and uncrowned king of improv.

Really nice tribute. I wondered why the film critics at the Reader didn't even mention him when he died. It seems even if neither you nor Mr. Marks cared for him one of you should have written something; he was important to so many. Thank you for this.

You're most welcome. Thanks for reading.