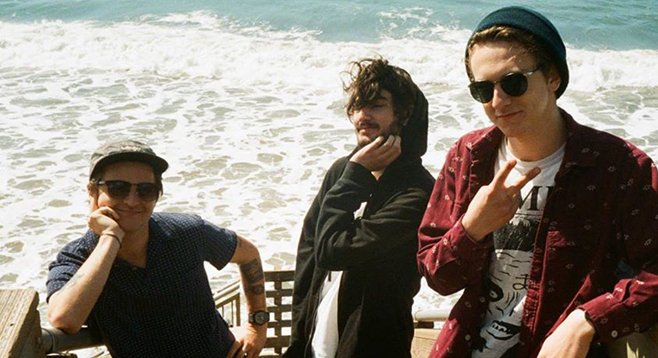 Singer/guitarist Mikey Carnevale has no idea why the Frights was nominated as Best Live Band for this year’s San Diego Music Awards.

The punk trio from Poway has no dancing go-go girls, matching suits, or monster masks used by other nominees — the Creepy Creeps, Burning of Rome, or Rocket from the Crypt.

“We don’t have any props,” says Carnavele. “And to compare us to Rocket From the Crypt? I guess whoever put us on saw how crazy the kids get at our shows.”

Yes, the frenzy at a Frights show — including crowd surfing and stage diving — does recall that of another successful three-piece punk band from Poway. But Carnavale says blink-182 comparisons don’t fit.

“We did go to the same high school as blink-182,” says the Rancho Bernardo High alum about himself and drummer Adam Lomnitze (bassist Richard Dotson went to Westview in Rancho Peñasquitos). “And every band who came out of our school wanted to sound like blink. But it wasn’t my style.”

The Frights’ sound is steeped in reverb-heavy surf rock. And Carnivale infuses some ’50s doo-wop choruses he says he got from roadtrips he’d take with his grandma. “Every summer from when I was 5 until I was 15 we went on summer vacations to the redwoods. The whole way she would play stuff like Dion and the Belmonts, Ritchie Valens, the Coasters, and the Shirelles....

“We record everything live with the amps and the vocals in the same room as the guitar and the drums.”

The Frights recording career was made possible by Soma manager Joe Nammo, who released their debut on his Postmark label.

“We had just played this really good Soma show opening for Voodoo Glow Skulls. Joe came backstage and told us he really liked us and he wanted us to be on this new label he was starting. We had literally just played our first show and we had, like, five, maybe six songs. We weren’t even planning on taking this seriously then. We asked ourselves, Do we sign with this stranger we just met at Soma?”

They did, and the Postmark/Frights collaboration led to a self-titled full-length album, two EPs, and one single.

“At first he didn’t really understand what we were doing because he was with Soma and that is primarily hardcore. And all this reverb and twang was kind of new to him. But eventually he trusted us. He learned a lot from us musically, and we learned a lot from him about the business. He’s been on the Warped Tour five times.”