Leslie Zemeckis on Siamese twins, life on the midway, and directing Bound by Flesh 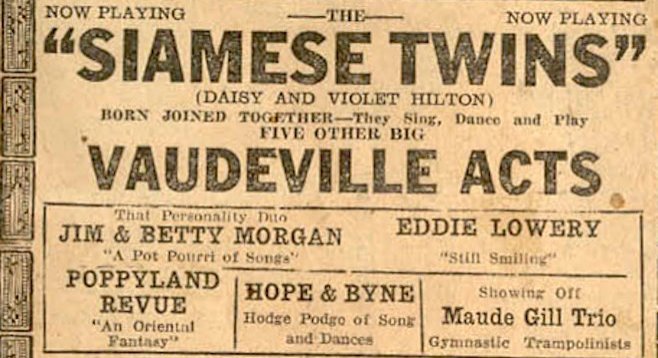 I’m old enough to have had a chance to witness an actual “freak show.”

Chicago’s legendary Riverview Amusement Park played home to one such production right up until their gates were shuttered in 1967. At the time of my visit, the star attraction was a gentleman who went by the name “Popeye,” based on his ability to seemingly inflate his eyeballs on command. On the bottom half of the freak-studded bill was a woman with no arms whose sole talent was decanting a bottle of wine with her feet and pouring a drink. (For all I knew at the time it could have been Frances O’Connor, the “living Venus de Milo,” who starred as one of Tod Browning’s Freaks.)

Even at age nine, there was something depressing about gathering together a group of physically deformed carneys for a paying audience to gawk at. I declined the opportunity. 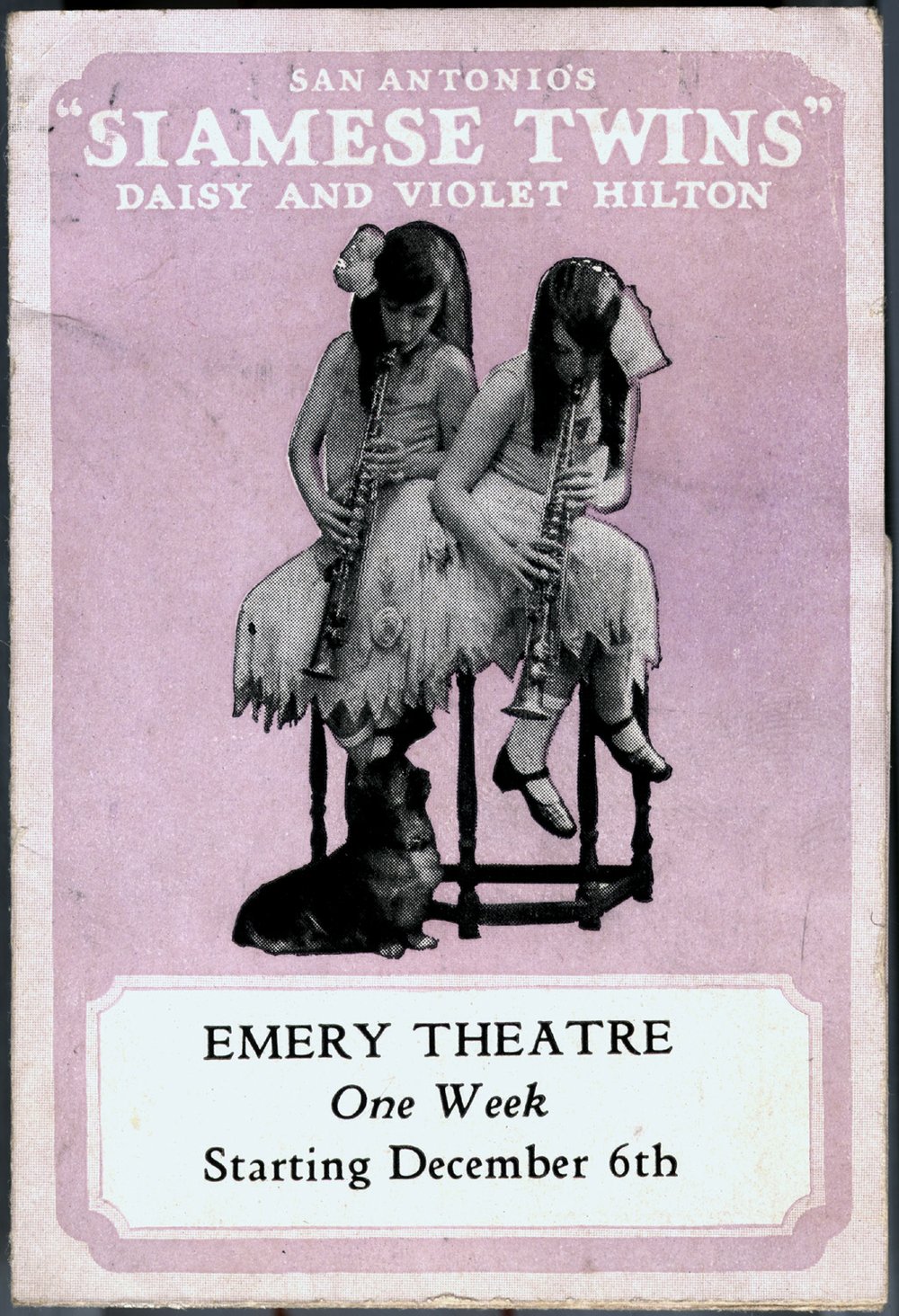 That doesn’t mean that I never got my armchair “freak” on. My video vault houses both Freaks and Chained for Life, a grade-Z cheapie starring conjoined twins Daisy and Violet Hilton, the subjects of director Leslie Zemeckis’s fascinating new documentary, Bound by Flesh, currently playing at the Media Arts Center’s Digital Gym.

I spoke with Zemeckis about her latest work. Hurry! Hurry! Step right up and enjoy the interview!

Leslie Zemeckis: Where it originally started from, and I think there’s a holdover that’ll get to later, was when a circus or carnival came to town. There was no way to see this kind of thing. Obviously there is a fascination with the unknown, anything that’s different. If you’re in a small town without a zoo, you don’t even get to see a tiger.

To see Siamese twins…. For the most part, people didn’t look at them as if they were human or as if they were people. So it was kind of okay to stare at them and wonder how this is even possible. Then it becomes politically incorrect — obviously, as it should. But we still do it. We do it with reality TV. There are little people on TV. There are hoarders with different kinds of physicalities. There is that human fascination for something different, odd, something that is not us. Whether it makes people feel better about themselves, makes them more empathetic…I don’t know, but it definitely has not gone away.

SM: One of the last people keeping it alive is Howard Stern and wack-pack members such as Beetlejuice and Eric the Midget. When asked about it Stern said, “Why don’t these people deserve shows of their own?”

SM: What is it about this subject matter that first attracted you?

LZ (laughing): First off, the fact that it’s not very well explored. It’s always interesting to look back and see the similarities there are between today and early American pop culture. There are so many stories from that era that are ready to be revisited and explored. In the time of the Hilton sisters, nobody looked at Siamese twins as if they were people who had feelings and knew love. There were very colorful characters in these forms of entertainment.

SM: Schlitze, Koo Koo, and the Snow Twins are given short shrift in the film, but then again, they all deserve documentaries of their own. Why no mention of Grady Stiles, the Lobster Boy? 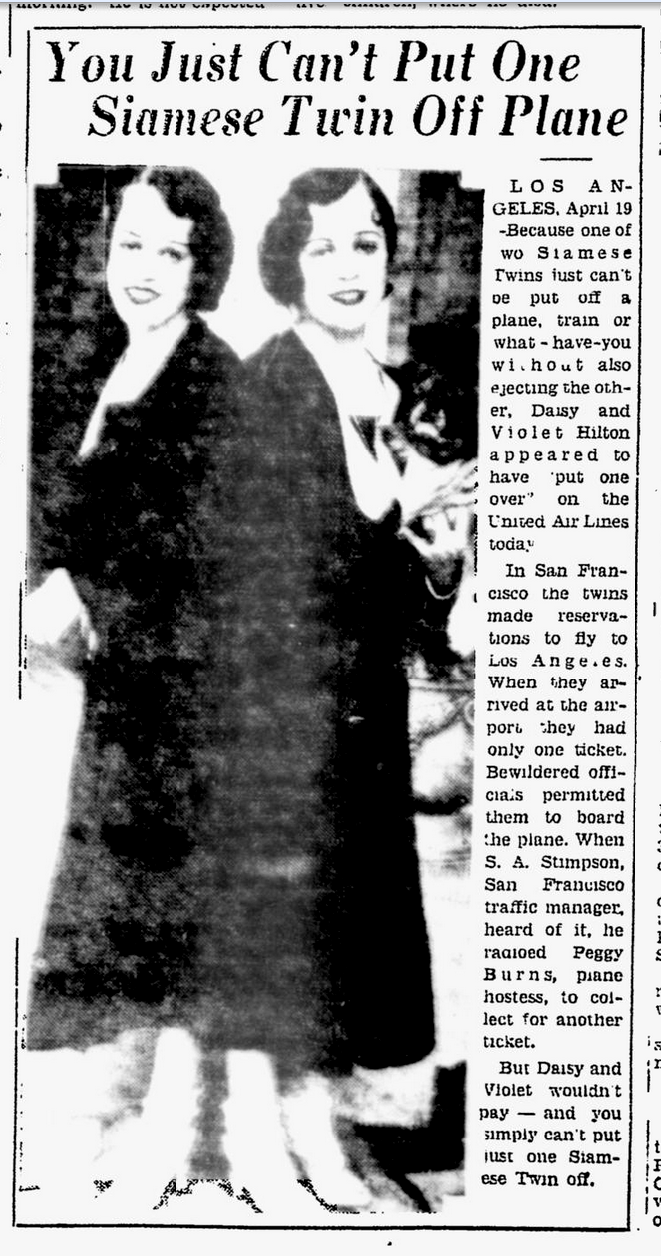 LZ: He didn’t really have anything to do with the twins. I wanted to give the sisters their due and put their lives in the context of what a sideshow was.

SM: And you were fortunate to have for your voiceover a little “biography” the sister wrote.

LZ: Some of it’s not true, but they did write this tiny little pamphlet that they would sell that I used for the narration.

SM: The term “ribbon of flesh” is mentioned several times during the movie. Did you ever consider it for the film’s title?

LZ: No. To me it was about the physical bond between the sisters. It was always a love story bound by flesh. I wanted this very exploitive title, because they lived in titles whenever anybody talked about them.

SM: In The American Cinema, Andrew Sarris writes Freaks “may be one of the most compassionate movies ever made.” Do you agree?

LZ: Wow. I don’t know about that. That’s a hard movie to watch. I find it very disturbing. Compassionate? I don’t see how.

SM: If anything, it’s always impressed me as one of the most exploitative films of its era.

LZ: Yeah. And the sisters did not like appearing in it.

SM: Some of your interviewees are, how shall I put it, as unique as the midway performers on display. (Laughing.) I love Ward Hall’s lapels that seat six. How did you assemble your cast of players? 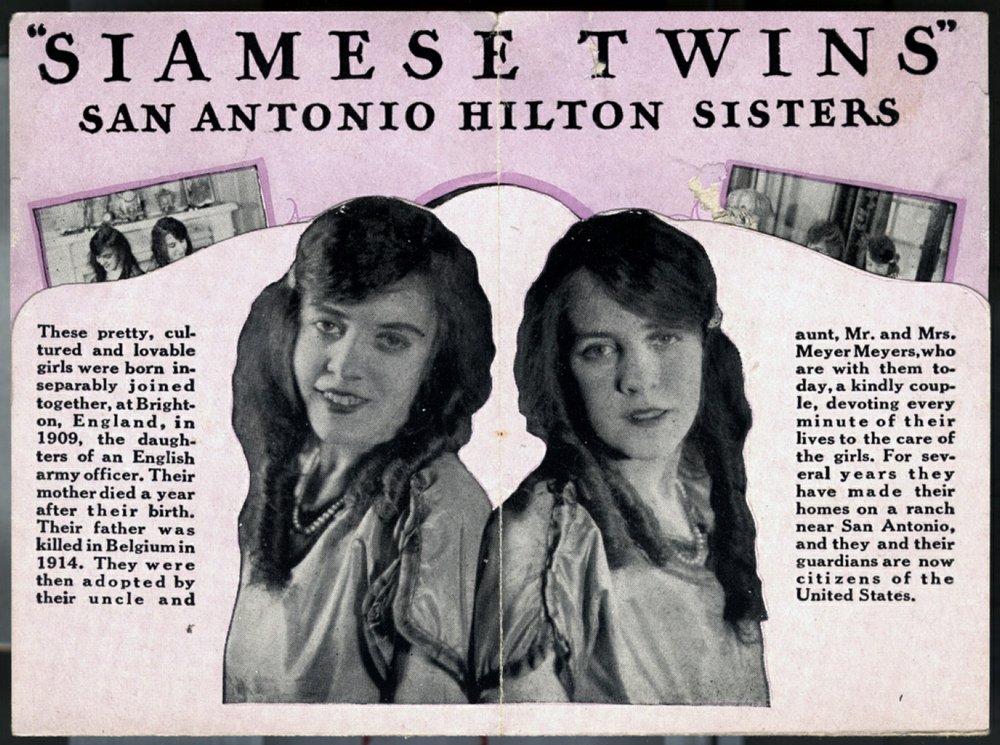 LZ: I put out feelers to as many people that had either an expertise in sideshows or knew the Hilton sisters. I was very lucky to find people who knew how to tell a good story. It was a bonus to have the information and know how to tell it. That is not always the case.

SM: I knew that Bob Hope had worked with the Hilton Sisters, but Howard Hawks? Can you give me a little backstory behind the photo they took together?

LZ: I don’t know. During their day they were photographed and filmed a lot. I wish I had been able to find more film. I don’t know if it’s out there or if it’s been destroyed. They always found themselves in some photo-op.

SM: Why do you think the Hilton Sisters were attracted to gay men?

LZ: I don’t think they knew any different. They were so completely sheltered. Like their goddaughter said, they had no idea about sex. They just didn’t know. I think it’s a matter of who they were around. That was the attraction. If it’d been somebody else, they’d probably have fallen in love with him. And they did also fall in love with straight men. There was a guy that Violent tried to marry for forever and couldn’t. He was straight.

SM: The one film that kept coming to mind while watching Bound by Flesh was Woody Allen’s Zelig. Have you seen it? 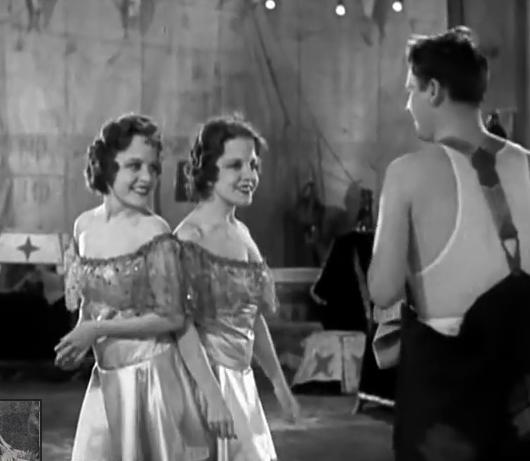 SM: You really did the period justice. Not only is this a very compelling biography of the sisters, but it’s a concise history of life on the midway.

SM: In the end, it’s tough not to find compassion for these performers. It’s a fine line to walk. On the one hand you know they were exploited and physically abused, but there’s also something kinda humorously quaint about the stiff, unpolished way in which they deliver dialogue. 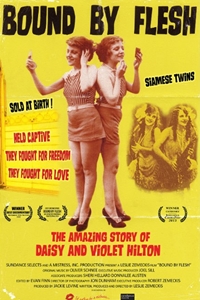 LZ: Part of the attraction is that it isn’t just one thing. I think you see a complete person. Yes, they weren’t trained and are not good actors. Some of their choices by marrying these gay men are somewhat funny. But it’s okay. It has everything. It isn’t just one thing where you shake your head and say, “Oh, these poor little exploited girls.” They weren’t just jokes. They tried to live a good life. They made bad choices.

SM: And at times they were able to put together a good life for themselves, but essentially by the time they had reached age 28, they were washed up.

LZ: What were they going to do? The culture changed and they didn’t know how to change with it. They just weren’t prepared.

Adding this film to my "to find and watch" list.