A demand to end to nighttime deportations 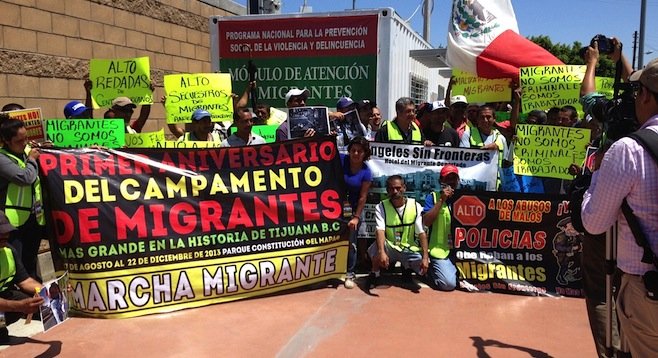 Dozens of deported migrants marched throughout Tijuana’s San Ysidro border region on August 7 in protest of the conditions they are forced into upon deportation.

The protest was organized by Alianza Migrante Tijuana and Ángeles sin Fronteras, as well as an alliance of other NGOs. Activities began at 11 a.m. at “El Mapa,” a square in the city’s northern district that was previously occupied by migrants as a make-shift shelter.

It was precisely a year ago that city police evicted the deported migrants from the square and sent them to find shelter elsewhere in the city. El Mapa lies just along “El Bordo,” the canal that cuts through the city and has become home to many of the city’s homeless population.

From El Mapa, deportees and supporters moved across the canal and to the San Ysidro border crossing, where protesters lined up and rallied between the vehicles along the U.S.-Mexico border. They demanded that the American government commit to a complete overhaul of immigration policies. The consensus is that although Barack Obama has been one of the presidents that has promised the most regarding immigration, he has also reportedly deported more people than any other president.

Both organizers and migrants allege that the U.S. federal government often releases detainees in the middle of the night, despite few migrant shelters within walking distance being closed at that hour.

“It’s here that the problem begins,” said Lourdes Lizardi López, an organizer for Ángeles Sin Fronteras. “This is why we’re also demanding an end to nighttime deportations.”

Dumped into the city’s Zona Norte district — known for the availability of prostitutes and drugs — migrants are often harassed by the police, as they are labeled by the U.S. government as criminals. As one migrant said, “The worst thing about it is when the police search me. They open my bag and they just dump my things on to the dirty floor. Things that I’ve tried so hard to collect. Hygienic products, like my toothbrush,” he said and paused. “How can I get a job if I’m not even presentable? To the police, we and our things are just garbage.”

There at the San Ysidro crossing, Sergio Tamai Quintero — a principal organizer of the Alianza Migrante Tijuana — shouted into a megaphone, saying, “What is needed here is a coordination. We are asking both countries to initiate a thorough reform.”

They broke the law. There is a process to follow to get a visa. They chose instead to do it the illegal way. No sympathy.