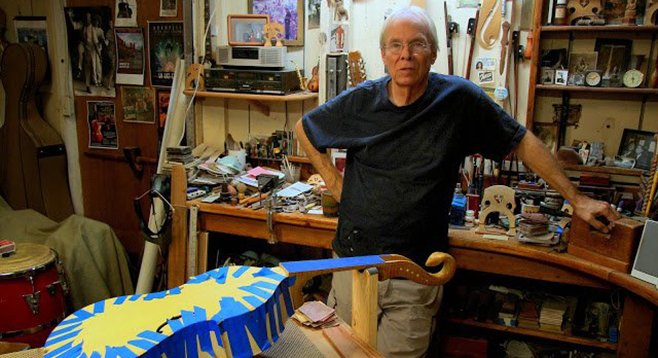 “I’m starting over again. I mean, this move is one of the hardest things I’ve ever done,” says instrument repairman/musician Dave Millard, taking a break from shuttling materials from his former home workshop in South Park to newer digs on Adams Avenue. “Twelve years ago, the move from O.B. to South Park was easy, because I was moving from a small shop to a bigger one. Now I’m going into a space about a third of the size, so I have to take some of my bigger tools, like the bandsaw, to friends’ houses.”

What prompted the move? “The South Park area has changed. The neighborhood has gentrified, and in the end, the property just became too valuable for my landlord to keep renting it out, so the owners decided to sell it. Our landlord was very cool, I’m really lucky that the rent stayed low all these years. He was very understanding of us musicians. He would even come to the jam sessions!” Millard’s South Park home wasn’t just a place to get your mandolin, guitar, or bass worked on — those jam sessions drew a crowd: “We had some incredible moments over the years. Daniel Jackson...Charles McPherson played here. Even Donna Frye came with her husband Skip!”

Millard has been making and repairing instruments since 1967, after apprenticing for three years in Texas with a master luthier. “This guy could build anything,” Millard informs the Reader, “I’ve never seen anything like him — he was building a harpsichord from scratch for a woman who played in the Dallas Symphony.”

Although his shop has become synonymous with double-bass repair, Millard had to learn those skills on his own. “When I got back here, Bert Turetzky said, ‘We need a luthier in San Diego for basses,’ so I just dove right in. ‘Intuit’ is the operative word here. The way I approach building and any kind of repair is more like a healing process, I don’t do ‘band-aid’ fixes, so the repair is more long-lasting.

“Each piece of wood has inherent qualities, just like we do: a personality, a density, a vibe to it. I ask myself what the piece of wood needs, and I keep working with it, planing and sanding it until it becomes an entity in itself — it’s another art form. When you get someone’s instrument in tune with itself, and it’s really singing, that’s a wonderful feeling.”