I need a bigger amp! 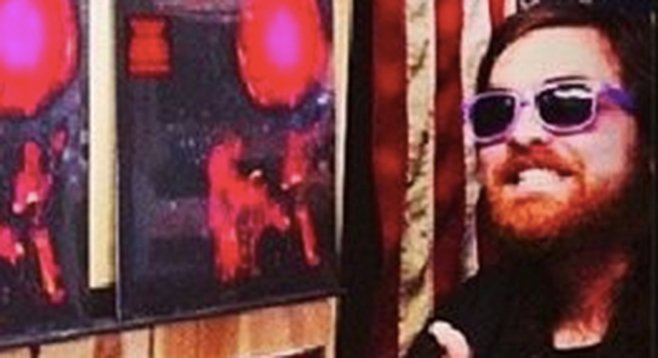 Nik Turner, Hawkwind founder, amphetamine mystic of space rock, nominally of England but probably from a few solar systems over, has been known to sport full-head makeup, paisley camouflage, and alien armature. But according to Zach Oakley of San Diego’s own hydrogen-bomb-ignited intergalactic rockers Joy, Turner can be disarmingly down-to-earth.

“Another band I play in, Artifact,” Oakley remembers, “opened for Nik when he played San Diego about a year ago. We put him and his band up for the night and he hung out and jammed, so I guess we hit it off right away....

“He played saxophone and flute on the [Joy] record. His sax solo on ‘Confusion’ is killer! My favorite is the flute that he put down on the acoustic tune ‘Death Hymn Blues.’ Overall, Nik is a righteous musician, a friendly and caring person and a total pleasure to work with.”

Joy’s titled their new album, Under the Spell of Joy, no relation to their first album, Joy. “The first record was simple,” explains Oakley. “We played it all live, straight to tape without too many overdubs. From start to finish, I think the new album has a wider range of tempos and rhythms and it even has a couple of acoustic tracks. Under the Spell of Joy ebbs and flows, which I think makes it more psychedelic than the first record.”

For Under the Spell, elaborates the guitarist, things got weirder. “The more, the merrier and whoever was willing to come out and play got to put down whatever they wanted. I was super stoked to have Parker Griggs [of Radio Moscow] play on the album. He’s one of the best blues guitar players around and put some hefty licks on the final track of the record ‘Back to the Sun.’ Brian Ellis [of Astra] plays organ and sax on a few tunes as well, and did a killer job mixing and putting the whole thing together.”

Asked about Joy’s influences, Oakley waxes candid: “Blue Cheer and Hawkwind are the fundamentals. What we are doing wouldn’t exist without those dudes. Earthless freaked us out — in the best of ways! — the first time they had us on a show with them as opener. I remember thinking, Shit, I need a bigger amp! I think that might also be a reason for the Blue Cheer comparison; we are a very, very loud live band.”