Authorities target autos with illegal or no documentation 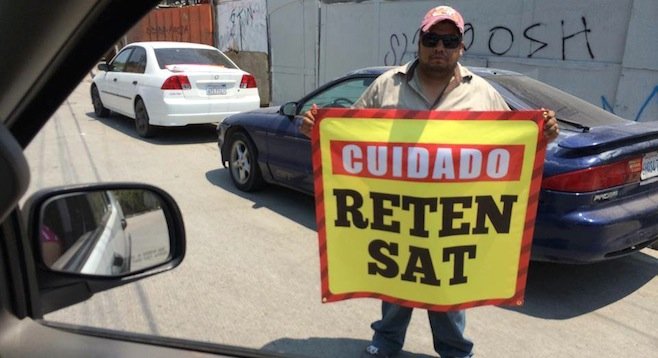 Since mid-July, Servicio de Administración Tributaria — SAT, Mexico's rough equivalent of the IRS — and Tijuana police have set up checkpoints in areas of the city to capture so-called “chocolate cars” — cars from model year 2008 or newer with California or foreign plates without proper documentation.

Children in Mexico, when playing soccer or any sort of game, often designate certain players de chocolate or de chicle, meaning that they don't really count as real players but can still play the game (usually someone's little brother). This is the term being used for cars in Mexico that are not registered in the country, most of them with California plates.

Article 3.4.7 of Mexican border law states that “as long as vehicles are owned by residents from a foreign country, they can be driven around in national territory limited to 20 kilometers from the border and the border region, as long as they have all the proper documentation.”

Gilberto Levya Camacho, president of CANACO (Mexico’s national chamber of commerce), led the charge of pressuring the government to get rid of “chocolate cars.” He mentioned that former Mexican president Felipe Calderon’s raising of importation fees in 2007 led to the number of vehicles imported illegally.

Importation fees vary, depending on the vehicle, and some cars don't qualify for importation. Most cars made before 2008 cost about $1000 to import, but newer models can cost much more.

There are over 250,000 chocolate cars in Baja California, 150,000 in Tijuana alone, according to La Cronica. A quick survey by a bystander suggests that half of the vehicles in Tijuana have foreign plates.

The main concern is that the cars have been used to commit crimes and then abandoned, leaving no trace of paperwork.

It did not take long for social media groups to begin reporting the locations of checkpoints. “Retenes Tijuana-Alcoholímetro” (which has over 45,000 members) had been strictly an alcohol-checkpoint alert group before the chocolate-car crackdown. “AntiSAT retenes Tijuana aviso” is another group reporting the location of checkpoints. They share information, try to answer questions about the new law, and even record and post pictures of police officers and city officials driving their own chocolate cars. The hashtag #TodosSomosChocolate was created to unite citizens rebelling against the new law.

The group demands lower importation fees and for the random checkpoints to be eliminated. They also blame the government for letting illegal car dealerships operate around the city and for targeting citizens instead of business owners who bribe police so they can continue operating.

After three weeks of checkpoints, there's no official number of cars that have been impounded. Gilberto Levya Camacho mentions that the real problem is in illegal car dealerships but says they don't have enough manpower for enforcement. He also mentioned that no car models before 2005 have been impounded.

“We are trying to protect humble people and we are asking for the government to pardon certain cars after a socioeconomic study or see other options to help,” concluded Camacho.   Checkpoints will reportedly be set up in Mexicali next, but no dates or more information was given.

So what is happening to all the cars confiscated? Resold? Are CHP/American insurance companies allowed access to the record to see if any were stolen in the U.S.?