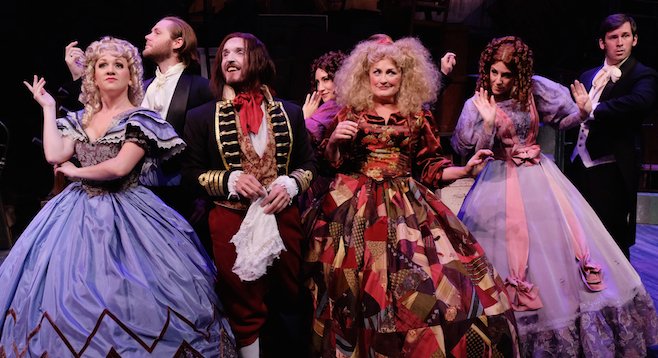 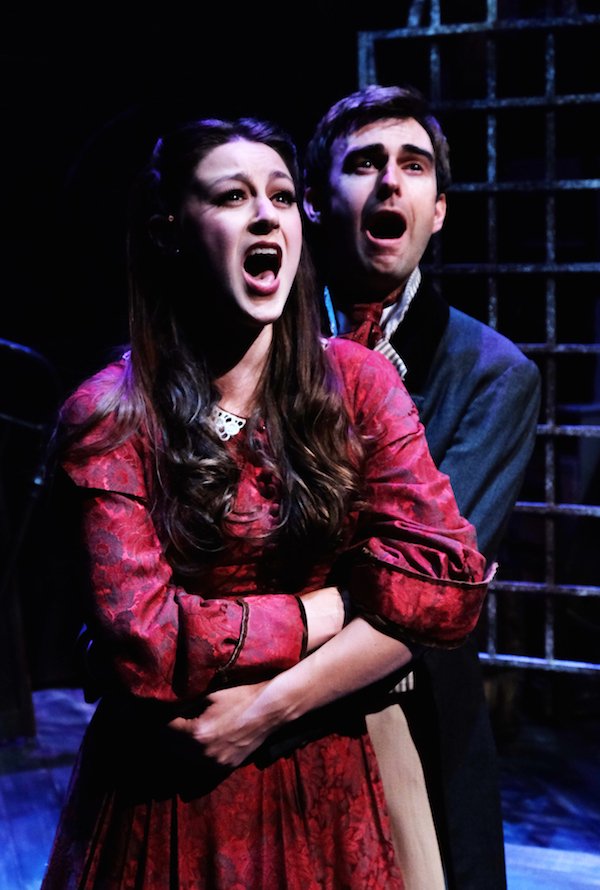 I think it was my second or third week on the job. I went to a small theater in National City — Lamb’s Players — in a former church, I found out, after I got lost and arrived late. The company did a colorful, minimalist adaptation of John Bunyan’s The Pilgrim’s Progress. I made a note to see their next show, and get there on time.

I’m watching Lamb’s Players’ Les Miserables and am knocked out! Director Robert Smyth, musical director G. Scott Lacy, and a splendid cast have made the epic — with epic demands — glow.

And all the while a part of me is thinking: remember when, and look how far this company — and San Diego theater — has grown!

And yet the original elements in Pilgrim’s Progress apply here. Lamb’s’ designers have always known their space to its inches, be it in National City or Coronado. Director Robert Smyth knows how to tell a story clearly and to create vivid effects with minimalist means. And Lamb’s adores music.

But come on, shouldn’t Les Miz bowl people over, even bully them, with sheer size? Didn’t Cameron Mackintosh and directors Trevor Nunn and John Caird stage it for sweep-you-off-your-feet grandeur? And isn’t the story so pressurized and convoluted that first-time viewers must research Enjolras or Eponine – or Victor Hugo’s other mysterious French names - after the show?

Their conflict’s also clear. They pray to different gods — Valjean’s benevolent, Javert’s letter-of-the-law — which makes each true to his calling (and Javert less of a beady-eyed villain).

The intimacy also highlights the sing-on-the-ride-home numbers: Fantine’s (Kelsey Venter) “I Dreamed a Dream”; Eponine’s (Allie Trimm) “On My Own”; and Valjean’s “Bring Him Home,” almost an octave above where you thought he’d sing it so unforgettably.

Les Miz (“the downtrodden”) tells the story of a failed revolution in 1832 France. When “slumming” students demanded change, the people didn’t hear them - wait: that’s Paris in 1968! And Berkeley!

For the famous barricade, designer Mike Buckley piles shutters, tables, trunks, and upside-down chairs on top of each other. The wall doubles as a prop shop. Bring on a chair and a table, next scene, in seconds. The brisk changes mask the sophistication behind them.

Lit by Nathan Peirson’s now-blazing, now-shadowy lighting, the battle at the barricade’s all popping rifles and snapping fireworks (slight problem: until the smoke rises, they’re shooting at the band). But recognizable individuals, led by Jordan Miller’s fiery Enjolras, fight and die, not actors flopping like rag dolls 30 rows away.

Lamb’s show doesn’t skimp on spectacle. For those familiar with the musical, the approach also poses questions. The biggie: how, since there’s no bridge in sight, will Javert fall into the River Seine?

Oh, he will; never you worry.

Another marker: Lamb’s Pilgrim’s Progress had a small cast in a tiny space. Three-and-a-half decades later Les Miz has around 20 performers, brilliantly costumed by Jeanne Barnes Reith, and a 10-piece band. This is a “go big or go home” production. Everyone involved delivers.

And they’re all local.

Note: Due to popular demand, Lamb’s has extended the run to September 28. But don’t wait to see it. You might want to see it twice.

Looking forward to seeing this!