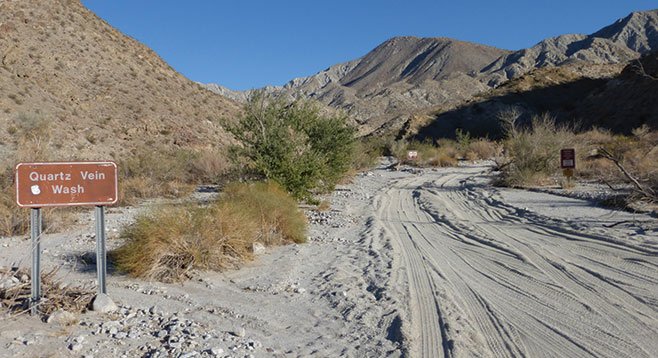 The Narrows Earth Trail, located at the “Narrows” where San Felipe Creek turns abruptly northeast just east of the junction with Pinyon Wash, is the perfect place to observe geology and earth movement in action. The short half-mile trail is located in a small side canyon called Powder Dump Canyon that was once used to store explosives in a bunker at the mouth of the canyon when the highway (SR-78) was under construction. 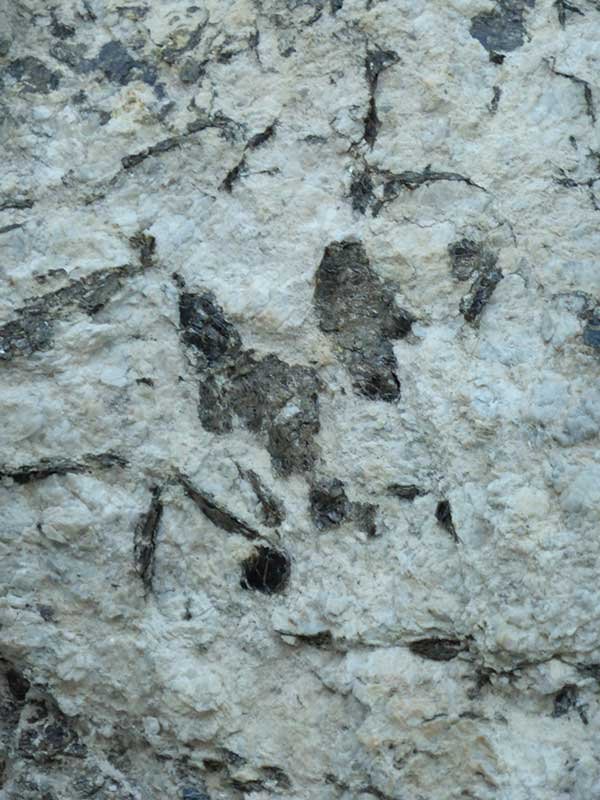 Quartz Vein Wash is the next canyon to the east where one can look for some of the same features found on the Narrows Earth Trail. In addition, Quartz Vein Wash has great examples of pegmatite dikes and black tourmaline, or schorl, in quartz. Large ironwood trees are scattered throughout the wash, making it a veritable forest. Wind caves show the force of wind as it has weathered and eroded canyon walls.

Begin the hike at the Narrows Earth Trail by picking up an interpretive guide at the first station that will describe the features to be observed on the walk through the seven stations. The contact zone for the Aguanga-San Felipe Fault is visible. This is a very complex area displaying region-wide detachment faulting. Along the walk are displays of prominent fault-gouging. The earth movement in this area has exposed pre-Cretaceous metasedimentary rocks that were originally laid down some 500 million years ago as alternating layers of sand and mud from an ancient seabed. These are some of the oldest exposed rocks of this desert area. They can be noted as bands of light and dark material in outcrops along the trail and in Quartz Vein Wash. 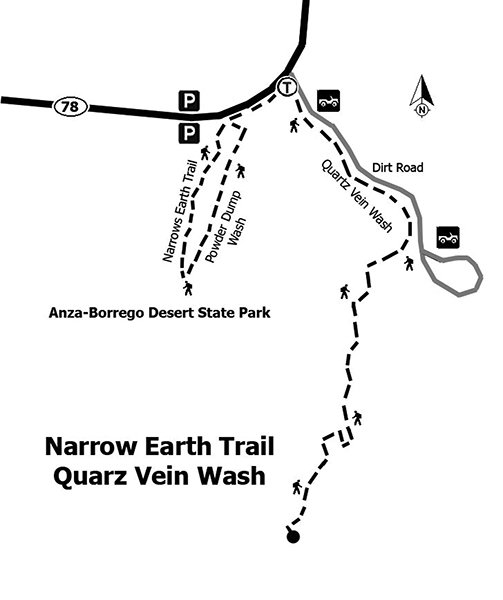 After this introduction to local geology, head east to the mouth and entrance to Quartz Vein Wash. This out-and-back is 1.5 miles in length and unlike the Narrows Earth Trail will be a climb of about 200 feet. Begin walking on the dirt road upcanyon.

Almost immediately after starting the hike, note a small cove on the right with ironwood trees — a perfect campsite. Soon after passing this cove will be a turnoff to the right with a sign that reads “no vehicles.” Follow this wash upcanyon, passing the forest of ironwood trees. Common plants that are found here in addition to the many ironwood trees include lavender, creosote, chuparosa, ocotillo, brittlebush, acacias, and staghorn cholla. At about half a mile begin looking for schorl found in the quartz boulders along the canyon walls. Here the walls are pocked with interesting wind caves. While hiking, note dark patches of rock within larger granitic boulders. These are called xenoliths — literally “strangers” in the rock. They are older chunks of surface rock that were broken up when molten rock intruded and captured the chunks as the rock solidified.

As the canyon begins to fork, stay to the right and work around the many boulders that appear as the canyon narrows. Note agave and barrel cactus in this area. The steep ridge on the right separates this canyon from Powder Dump Canyon. Climb as far as comfortable, and then turn around and return to your vehicle.

Distance from downtown San Diego: 85 miles. Allow 1 hour and 45 minutes of driving time. From Julian, drive east on SR-78, down Banner Grade, across Scissors Crossing, and past the junction with SR-3, the Yaqui Pass Road. The Narrows Earth Trail parking area along the highway is 4.7 miles past this junction before the road turns abruptly to the left to go over and around a hill.

Hiking length: 2 miles, a loop and out and back.

Difficulty: Easy. Total elevation gain/loss 200 feet. No facilities and no water. Carry water. Turn around when the steepness and difficulty of the canyon make it no longer an easy hike.