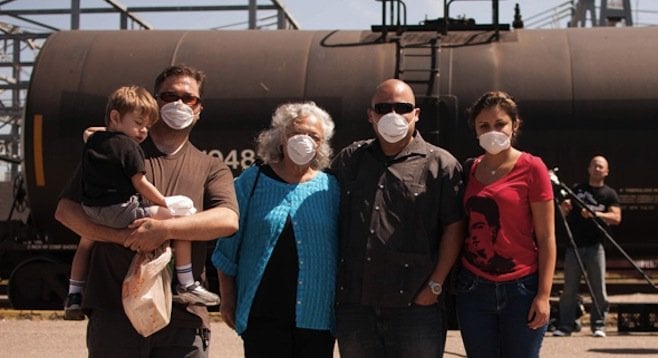 San Diego's largest military contractors continue to shovel money toward a political campaign whose goal is to sink the Barrio Logan community plan update at ballot boxes on June 3.

General Dynamics spinoff National Steel and Shipbuilding Company (NASSCO) has given the most, aiming to defeat the city-council approved land-use changes that would create breathing room between industry and residential neighborhoods. On April 28, the shipbuilder put another $250,000 into the industry-led “Protect Our Jobs Coalition.”

So far during the month of April the coalition has collected nearly $400,000. On April 3, Virginia-based military contractor Huntington Ingalls contributed $100,000 to the Protect Our Jobs Coalition. San Diego's Chamber of Commerce, run by former mayor Jerry Sanders, followed suit with a check for $20,000.

If money is the deciding factor, then Barrio Logan residents and environmental groups supporting the measure are up a creek. The "Yes on B and C, Barrio Logan Community Plan, Sponsored by Social Justice Organizations" has raised just $11,000 since forming, $10,000 of which came from California Assembly-speaker-elect Toni Atkins’s political action committee.

In response to the flood of cash from military contractors and pro-business groups, residents recently have taken to the streets in protest. On April 25, a press conference featuring former mayor Jerry Sanders and shipping industry representatives was interrupted by a handful of protesters, as reported by writer and Barrio Logan resident Brent Beltrán in the San Diego Free Press.

The fight for Barrio Logan land use has moved from the courtroom to court of public opinion. On April 4, Superior Court judge Randa Trapp decided to allow the ballot measure to move forward, despite evidence that the signature drive funded by General Dynamics and others was steeped in misinformation.

"[Environmental Health Coalition] has met its burden to show the likelihood of prevailing on its claim that at least one of the three statements made by [the] association was misleading," read Trapp's ruling. "The statement was not an opinion based upon the statements within the maritime report. Nonetheless, this evidence does not meet the high standard set forth [in previous court cases]."

The items will appear as Propositions B and C on the June ballot.

The headline should have read,"Money will defeat Barrio Logan residents" Sorry Dorian. After Filner's implosion big money stepped right in to put in their boy. They took advantage of the voters who were disgusted with what Filner did knowing full and well many wouldn't show at the polls and the self fulfilling prophesy was complete. Now they're pouring big money into their agenda. Looking at the short term its a good thing for industry, and for our local economy. However, is it really fair for someone that lives in Paradise Hills, Otay Mesa, or Mira Mesa for that matter to vote on a measure that affects Barrio Logan? I think not. My brother lived in that affordable housing development directly under the Coronado bridge for only a few months. In no time at all, both his children developed respiratory issues. He was able to leave. What happens to the residents of Barrio Logan who can't relocate when this goes through? In the end, there will be countless lawsuits due to health issues. How much will that cost? Is it worth it?

With all the money being expended on this ballot issue, I can only speculate that the money might be better spent on buying out those residents and relocating them out of the industrial zone. And as more funds become available, buy out more of those on the periphery until the area no longer has residents. Problem solved? (Well, sort of.)

San Diego hits a new low when only one stay-at-home dad, his toddler and mother-in-law protest a gathering of corporate eagles who are destroying democratic process with their money and influence.

Visduh makes an outrageous suggestion here -- a measure of how powerless average citizens have become since populist Mayor Bob Filner resigned in disgrace and was replaced by blond and bland Kevin Faulconer who falsely pledged to serve "all of San Diego."

What will the ballot language say on our June referendum? Will it even resemble what's really happening? Will regular people understand? Will they even bother to vote?

Barrio Logan's dirty industrial enterprises along the harbor have received judicial permission -- no thanks to enabling Judge Randa Trapp who once headed the NAACP here -- to lie and buy their way onto a public ballot and to claim they are "saving jobs," when in truth they are preventing a small and poor neighborhood from updating its own community plan to protect its residents' health and well-being.

Please, the "corporate interests" are Jennifer LeSars development interests on the LEFT!!! What a sham this whole production is. If these people are so worried about "health" from pollution why do they wanna put 2000 new homes ON the I5????