This time you may really be fired, Sloat 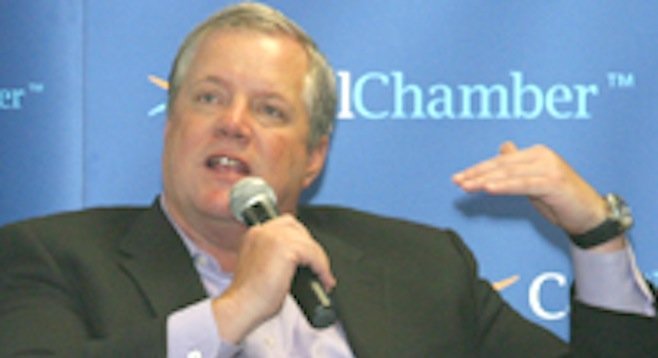 It may finally be curtains for the Sacramento lobbying firm of Sloat Higgins Jensen & Associates, dumped by a host of big-name clients after it agreed earlier this year to pay a record $133,500 fine for making illegal campaign contributions to state elected officials.

Departing clients included Accenture, the San Francisco 49ers, and Verizon, Sloat's most lucrative client, which paid the firm $352,000 in 2013.

The Orange County Transportation Agency dropped Sloat in March, with director Jeff Lalloway, an Irvine city councilman, saying, "I personally don’t want to have a relationship with Sloat after these serious violations."

Added Todd Spitzer, an Orange County supervisor also on the agency board, "I will not support writing a check to Sloat Higgins for lobbyist services."

In San Diego, it has been a different story for Sloat, whose founding member Kevin Sloat, onetime aide to Republican San Diego ex-mayor and former governor Pete Wilson, was originally retained by GOP ex-mayor Jerry Sanders to handle the city's Sacramento lobbying work.

Mayor Kevin Faulconer's aide Matt Awbrey told us in early March, two months after the Sloat scandal broke, "they are still on contract while the City is developing a new lobbyist [Request for Proposal]."

It may have taken awhile, but Faulconer's call for lobbyists has at long last arrived. According to the document, the mayor is seeking "government relations professionals to ensure that the City maintains a high level of effective advocacy before the Executive and Legislative Branches of the State government." Responses are due May 19.

"Favorable legislation" sought by the city involves "Bi-national issues" and "Bond allocations, grants and other funding opportunities," the document says. A major objective for taxpayer funding is believed by city-hall insiders to be a controversial cross-border railroad project and other political pork that benefits campaign contributors and looks good on a résumé come re-election time.

Upon taking office in January of 2013, Democrat Bob Filner fired both Sloat and the city's Washington lobbyists Patton Boggs, but after Filner's fall in a sexual harassment scandal, both lobbying shops got their jobs and sizable stipends back, courtesy of interim mayor Todd Gloria.

Filner's move to get rid of the lobbyists was met with a hail of abuse from U-T San Diego, the newspaper owned by developer Douglas Manchester, whose so-called Navy Broadway Complex, a lucrative hotel and commercial development on federal land at the foot of Broadway, was listed among lobbying chores for Patton Boggs.

Sloat & Bloat, Slanders & Libel, Oldmanchester & Faulconer, Gloria & Goldsmith. But never mind, Bob Filner was REALLY the evil-doer here. We know why he was dead meat before he ever got started, when we look at this array of self-aggrandizing, preening opportunists.

Why do we tolerate it?

So now I turn to the messenger: I am waiting for Matt Potter to write one story that doesn't evoke feelings of disgust and alienation from our body politick. It will be a challenge.