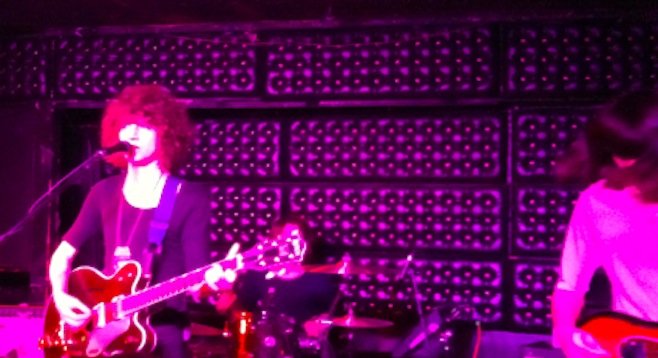 The Casbah, being a smaller venue, was an opportune setting to see Temples up close. Temples is an English psychedelic-rock band that has played major European festivals (as well as this year’s Coachella) and supported the likes of Kasabian and the Vaccines.

Temples live at the intersection of Barrett-era Pink Floyd, the Byrds, and T.Rex, but with a contemporaneousness that make them more than pastiche. By the third song of the set (“Sun Structures”), the crowd was warming up to Temples and all too happy to oblige when singer/guitarist James Bagshaw urged, "Shake your hips to this one!"

The set consisted of originals from Temples' 2014 debut album, Sun Structures, along with B-side “Ankh.” Bagshaw — who clearly relishes his role as a frontman — looks the part of a young Marc Bolan with a clear, clean voice and curly locks, but he also has the stage presence and talent to pull it off. It was an engaging show from an up-and-coming band that hasn't grown so big that they aren't available after the show for a quick chat and a photo.