Where dog-fur yarn comes from 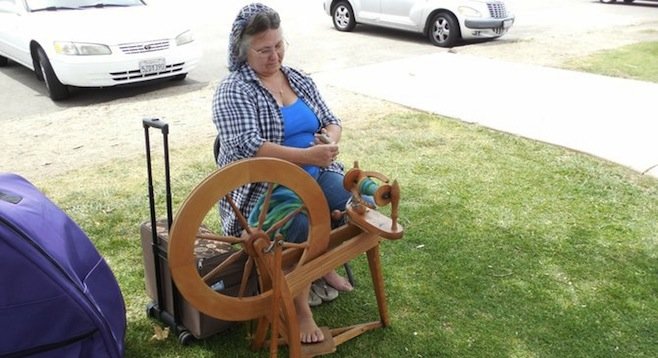 On Wednesdays during seasonal school breaks, a patch of grass near the baseball fields at Lake Murray hosts a gathering of spinners. 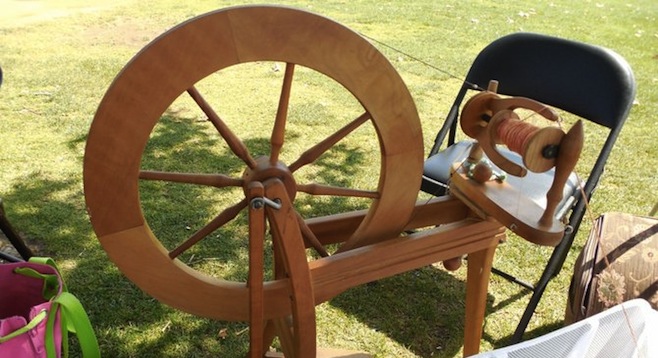 Up to a dozen women meet at around 9 a.m. and set up their spinning wheels in a circle. Using wool and fur (usually from sheep, but also rabbit, goat, alpaca, cat, dog, and others), they begin to “feed” their wheels. As their feet pedal the treadles, the fibers twist, become single strands of yarn, and are rolled onto a bobbin.

The women are classmates in an adult learning group that began at La Mesa Senior Center and Helix High School over a decade ago. Back then, some of them decided that during spring and summer school breaks they’d meet outdoors at nearby Lake Murray.

At first they set up near a busy residential street at the northern end of the park; but too many near-accidents resulted from drivers slowing to stare at the unusual sight, so they moved to the quieter ball-field area. The ongoing class has moved to different schools over the years, but the Lake Murray gathering spot remains the same.

Occasionally a man takes the spinning class and comes to the park, but it's mostly women drawn to this quiet art. The instructor, Margaret, noted that this is quite a change from some periods in history, when spinning was strictly men’s work and women were prohibited from doing it.

The colorful yarns they make can be knitted into most any form of apparel and are sometimes used in novel ways: covers for water bottles, phones and tablets.

Most of their spinning wheels are similar to those made a thousand years ago, but some opt for modern designs: light-weight frames of PVC or whisper-quiet motors powered by sleek battery packs.

“The skill of spinning has a steep but short learning curve,” Margaret says. “It's difficult at first, but when your mind and fingers find their rhythm, it's relaxing and meditative.”

“But that first month,” one of her students chimes in, “you swear a lot.”