Life in the rich and political lane 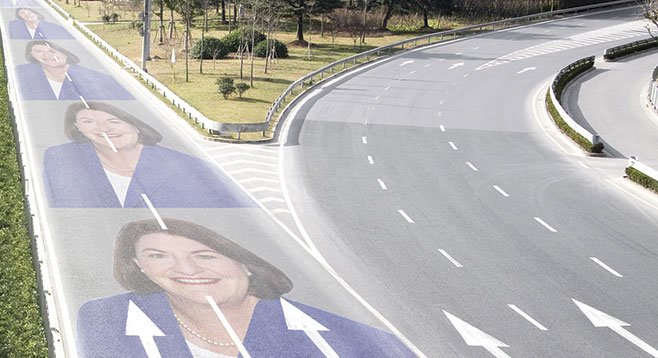 Democratic Assembly speaker–elect Toni Atkins hasn’t wasted time cashing in her newly won influence for campaign dollars to support the party’s roster of San Diego City Council candidates. Democrats are throwing a $125-a-head (up to $5000 for “co-chairs”) cocktail reception with Atkins this Thursday at the Mission Hills residence of gynecologist Dr. Philip Diamond and American Water external affairs chief Kevin Tilden, according to a recently emailed invite. (American Water’s website says that, “In California, we serve about 630,000 people in 50 communities in service areas in the Northern, Central and Southern parts of the state.”) Beneficiaries of the San Diego fundraiser include council hopefuls Sarah Boot and Carol Kim, as well as incumbent Myrtle Cole.

A batch of big money has already rolled in to the Democrats from developer M.C. Strauss Company of Solana Beach, which gave $21,387 earlier this month. The firm belongs to Matthew Strauss, most famous locally for an extensive modern art collection, including a number of Gerhard Richter paintings, acquired in the 1980s, owned by his foundation. According to a report in U-T San Diego, rock star Eric Clapton sold a Richter at a 2012 Christies auction for a living-artist record of $34.2 million.

City Republicans are no slouches in the fundraising business either, recently picking up $5000 from Walmart. The “Neighborhood Coalition Supporting Chris Cate for Council 2014, sponsored by the Lincoln Club of San Diego County,” received $20,050 from Lincoln Club president Bill Lynch of Rancho Santa Fe, who reportedly made his fortune in local Laundromats. In related giving, utility giant Sempra Energy kicked in a cool $25,000 to the San Diego Regional Chamber PAC, which is expected to heavily fund this year’s Republican efforts to take control of the city council.