Meter rate jumps to $1.75 an hour in some Embarcadero lots 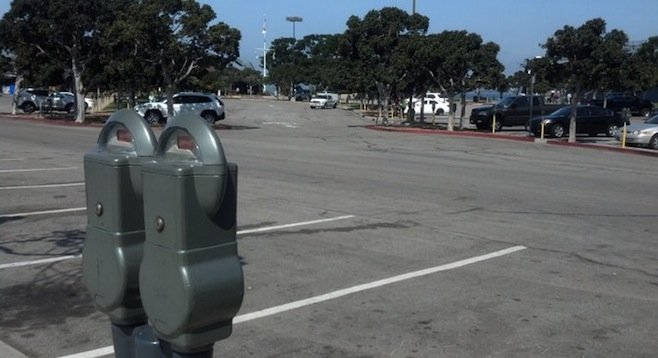 The Port of San Diego has decided to experiment with a "parking meter pilot program," which might better be described as a localized hike in parking-meter rates.

There are 186 metered public parking spaces at Tuna Harbor, which sits just south of the USS Midway museum and hosts restaurants and a portion of the Port's art collection that includes a replica of Unconditional Surrender, depicting the famous kiss between a nurse and sailor shared on V-J Day, celebrating the end of World War II.

Currently, parking fees are $1.25 per hour, with fee enforcement running from 8 a.m. to 6 p.m. In the nearby "Hospitality Zone," encompassing the Gaslamp District's popular restaurants and bars, the city recently changed enforcement of those hours from 10 a.m. until 8 p.m., a change port commissioners want to enact to draw more revenue from the dinner crowd.

But while the city's changes in February were limited to enforcement hours, the pilot program will go further. Meter rates will see a 40 percent spike to $1.75 per hour; and Sundays, traditionally a day of rest for meter maids, will now be subject to regular enforcement, with the exception of federal holidays.

"Despite significant increases in demand in certain areas, particularly the North Embarcadero, parking meter rates on Port tidelands have remained the same for several years," reads a statement from the Port announcing the price increase and expanded enforcement. "Parking along the North Embarcadero and specifically, Tuna Harbor, is at capacity seven days a week."

We visited Tuna Harbor on three occasions Monday, April 21, to observe the reported maximum-capacity crowds, but were unable to verify the port's assertion, at least on one day. At around 10:30 a.m., the lot was well under half capacity. Visits in early and mid-afternoon had more traffic, but still several dozen spots were unoccupied.

The port's intention is to keep the pilot study going for six months, with a report on the effect of the changes due in December. Based on the findings, a modified fee and/or enforcement-hours structure could be coming to other port-controlled parking meters around San Diego Bay.