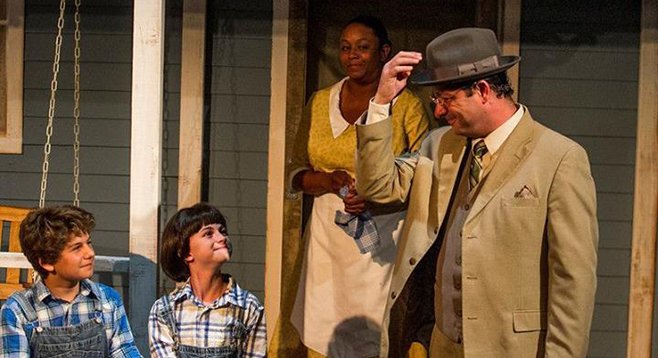 To Kill a Mockingbird

It’s impossible to measure these things, but surely the book (1960), by Harper Lee, and the Oscar-winning movie (1962) must have had an impact on the Civil Rights Movement of the '60s. Along with an enchanting, Tom Sawyer/Huck Finn view of childhood, To Kill a Mockingbird exposes a blatant injustice unforgettably.

There’s just no way Tom Robinson, an African-American, was guilty of rape. The case is clear-cut. HE DIDN’T DO IT. Yet even the noblest lawyer of them all — he of the Roman name Atticus — fights an uphill battle against the deeply entrenched racial prejudice of 1935 Alabama.

The surprising verdict may have raised mass awareness the way Alex Hailey’s Roots — novel and TV series — did in the late-Seventies. 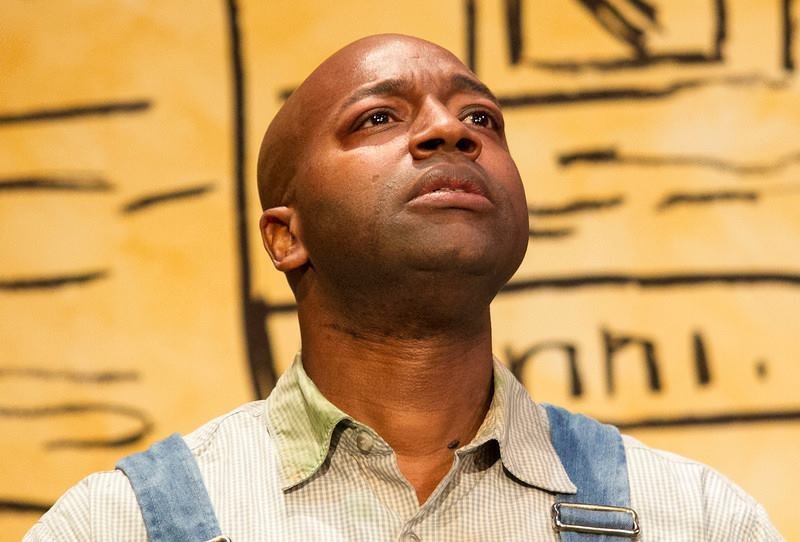 Durwood Murray as Tom Robinson in To Kill a Mockingbird at New Village Arts.

In 1990, Christopher Sergel wrote a theatrical adaptation of Mockingbird for Monroeville - the “literary capital” of Alabama since Harper Lee hailed from there and Truman Capote — the character Dill in the story — spent his summers down the street. The town performs the script every May.

The play resembles a postcard of the Grand Canyon. It covers the general idea, and does nicely detailed work with the famous trial, but makes one want to visit the book/canyon in person.

And see Scout’s hilarious Halloween costume (which only she could have imagined), and her Stoic father (Lee originally entitled the book Atticus), and that rabid dog snarling up the street, the “walk a mile in their shoes” philosophy, and the almost tangible, pre-teen wonders and mysteries — and then the life-changing, “real world” intrusions.

Staging the story, even in reduced form, is a big project. The New Village Arts production, co-directed by Kristianne Kurner (who narrates as the older Scout) and Justin Lang, succeeds much more often than not.

Tim Wallace’s set’s a real plus: stage left, the rundown Radley front porch, and the nearby gnarled tree offering strange gifts; stage right, the two-story Finch house, the second floor doubling as the courtroom balcony in Act two. Bill Bradbury’s subtle, excellent original music sets the tone in pre-show and keeps it throughout.

Manny Fernandes anchors the evening as wise, forthright Atticus Finch, but the acting, overall, is uneven. Durwood Murray does quality work as embattled, almost-mute Tom, and Yolanda Franklin makes the maid Calpurnia a gentle force out of just a few lines. From her black, Prince Valiant bangs to her blue overalls (authentic costumes by Mary Larson) young Katelyn Katz is just right as Scout, though the young actors playing her brother and Dill need to enunciate more clearly, even if it means down-playing the accents.