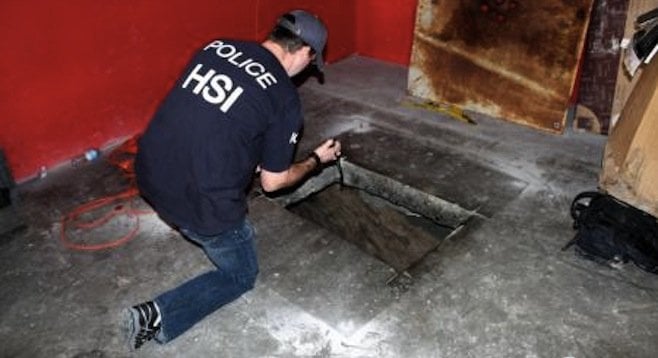 A group of five possibly armed Mexican military came through the drug tunnel under the border the night of April 1 and tried to exit in an Otay Mesa warehouse being guarded by the Department of Homeland Security and the U.S. Border Patrol, according to U.S. Border Patrol sources and Border Patrol union reports.

The Mexicans weren't expected, couldn't produce identification, and prompted an intense response from the two federal agents watching the tunnel.

"This is an officer safety issue, and they're trying to brush it out," Pacheco said. "No one knew who the guys in the tunnel were, including the Mexican police who were contacted by a supervisor at the scene."

San Diego Border Patrol sector chief Paul Beeson, however, said the people in the tunnel turned out to be members of the Mexican military, known as Sedena, for the Secretaría de la Defensa Nacional. But, he said no military men were expected and no one was able to immediately confirm that while the incident was unfolding. 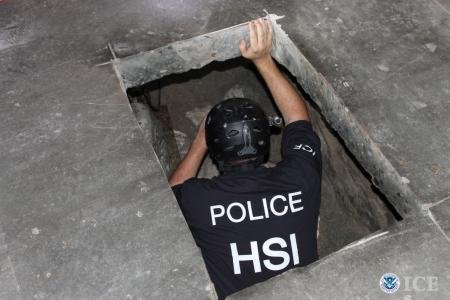 "They had told us their people were going to measure the tunnel," Beeson said. "They didn't say when." Union reports indicate that one Border Patrol agent and one Homeland Security Investigations agent were at the warehouse at around 9:30 p.m. when a robotic video camera captured the images of five men with military assault rifles passing the camera in the tunnel.

According to Beeson, the tunnel had a heavy steel plate across the top of the tunnel exit into the warehouse at 10145 Via de la Amistad. The tunnel was found on April 1 by Tunnel Task Force special agents following up on a tip from a confidential informant, according to court documents. 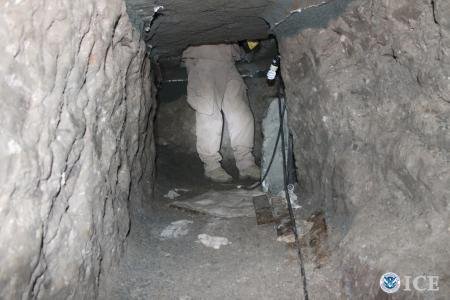 Mexican authorities were notified immediately and shut down the tunnel openings on the south side of the border the same day.

Department of Homeland Security personnel, including Border Patrol agents, keep watch on the tunnels until they're sealed. That's what the two federal agents were doing that Thursday night when sensors in the tunnel were tripped.

"The camera showed five people with military assault type rifles," according to a union report. "[The] Border Patrol agent immediately requested back up personnel by use of [Dept. of Homeland Security] bureau radio and requested personnel with rifles in order to prepare for confrontation of people with assault type rifles in the drug tunnel that were making movement northbound in the tunnel and shortly making it to their location.

“Multiple Agents responded to the scene in order to provide assistance to [the] Border Patrol agent and the HSI Agent."

One of the men in the tunnel told the agents through the air holes in the steel plate that there were three of them and that they were Mexican military but they were unable to provide any military identification, according to the report.

They repeatedly asked to leave the tunnel and enter the warehouse and for water, the report says. The radio call that went out to Border Patrol agents from the warehouse specifically asked for agents with long rifles — automatic M4 rifles, Beeson confirmed.

At least four Border Patrol agents arrived to provide backup, including a supervisor whom the union report says telephoned his counterparts in Mexico for information. According to the report, he was told there were no Mexican police in the tunnel.

Meanwhile, the spokesman for the group in the tunnel continued to ask to be allowed into the warehouse, according to the report.

"They were informed by HSI that they would not be allowed to exit the tunnel in the United States and after [a Border Patrol agent] stated that the Mexican police was responding on the Mexican side of the border, the armed personnel started to return to Mexico in the tunnel," the union report states.

The men in the tunnel turned back south and passed the video camera in the tunnel as they went, giving the agents monitoring the camera a last look, according to the report.

Homeland Security’s Garcia said the reports were not true.

"It's illegal and they would be arrested," Garcia said in a brief telephone interview.

Border Patrol’s Paul Beeson said that the incident occurred but that he wasn't sure if the men in the tunnel were armed.

"It would not be unusual for the Mexican military to carry weapons," Beeson said. "We are confident they were Mexican government officials who had reason to be in the tunnel — it's unfortunate that they didn't tell us when they were going to be there."

But, he confirms, their unexpected arrival at the warehouse "triggered a heightened law-enforcement response and appropriately so."

Beeson has crawled around in one of the border tunnels and notes that it's hard to tell what country you're in.

He confirmed that the men were in the deeper of the two tunnels busted April 1, which, according to HSI reports and the court complaint, drops below the surface, then to a 15-foot-long horizontal walkway. At the end of the walk, there's 68-foot vertical shaft that drops downward to the main tunnel. The feds found a ladder and a cable winch in place at the top of the shaft, presumably to haul drugs up to the last walkway. That means that the men in the tunnel would have had to make a 68-foot climb to talk through the steel lid over the tunnel opening in the warehouse.

"They were certainly into the U.S.; they had good reason and we were told they would be," Beeson said. "We just weren't told when."