Doggone! The dog’s back after 7 years 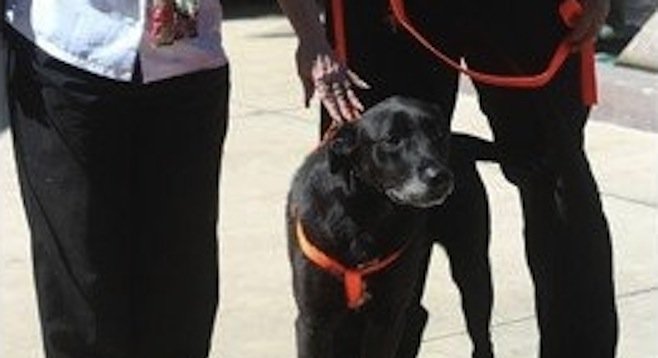 A few weeks ago, Buddy, a ten-year old Lab, was reunited with his owners after having gone missing for seven years.

During the San Diego County wildfires of October 2007, Buddy and his family were evacuated from their Ramona home. John and Cathy Hartman had to leave Buddy at their daughter’s home in El Cajon. During the commotion, Buddy jumped over a fence and disappeared.

Someone in Imperial Beach had found Buddy shortly after the fires. Unfortunately, the Hartmans had used their home phone number on the records of the $10 microchip placed in Buddy in 2005. By the time phone service was re-established to their burned-down home, Buddy had again disappeared.

After three years of attempting to rebuild their home in a climate of what John calls “abuse” by the county and the state, they gave up on California and moved to Oklahoma. Cathy had updated Buddy’s microchip information prior to their move.

In a phone interview from their Oklahoma home, John said that a few weeks ago, while they were driving into San Diego to visit family — up Wildcat Canyon Road (the same area that was devastated by the 2007 fires), John’s cell phone rang. It was someone from the Gaines Street county animal shelter saying they had found Buddy; he had been picked up as a stray in the Golden Hill area.

Upon arrival to the shelter, Buddy leaped into the Hartmans’ car. “Of course, he’s so friendly he might have done that with anyone, which may have been part of the reason he disappeared,” said John. But Buddy has been by the Hartmans’ side ever since they reunited, including the 1500-mile return trip to Oklahoma.

In a county news release, deputy director of Animal Services Lt. Dan DeSousa said, “We’ve reunited animals from across the country and even the world with their owners, but seven years is one of the longest time periods we were able to reunite a pet and its owner.”

“He was very well cared for and in perfect health,” said John.

Buddy’s owners would like to hear from anyone in San Diego with information about Buddy’s past seven years. The Hartmans request contact through the author’s Reader page.