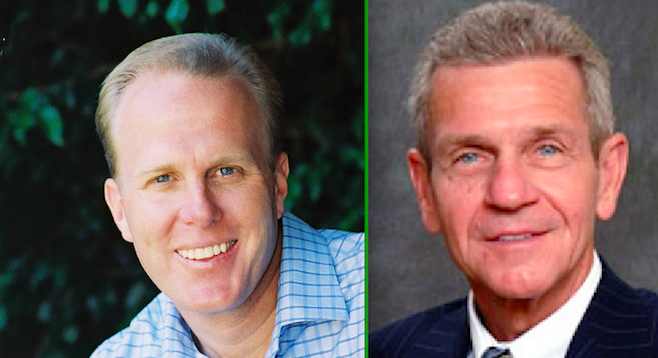 A key player in San Diego's GOP Lincoln Club, Robinson is regarded by many local politics watchers as the most effective influence-peddler at city hall. Well-heeled clients have included developer and publisher Douglas Manchester and Las Vegas's Irwin Molasky, an original owner of the La Costa resort and a onetime associate of the late mobster Moe Dalitz.

According to city campaign financial records, since 2007 Robinson and members of his law and lobbying firm, Hecht Solberg Robinson Goldberg & Bagley, have contributed a total of $49,446 to campaigns for city office, including $4100 to councilwoman Lorie Zapf, $1100 to ex-councilman Carl DeMaio, and $7200 to Faulconer's mayoral effort.

The firm and Robinson gave a total of $10,725 to the Lincoln Club, which ran a take-no-prisoners campaign of hit pieces against Republican-turned-Democrat Nathan Fletcher and Democratic city councilman David Alvarez, which political insiders say helped clear the way for Faulconer's victory.

In addition to his service for Mission Bay, Robinson is also on the board of the powerful San Diego County Regional Airport Authority. Recently he was the only vote against building limitations in Little Italy, which lies under the airport's approach path, according to an account in U-T San Diego.

Under the headline "Little Italy pans new airport rules," the paper reported, "Critics say the tighter regulations are bureaucratic overkill that threatens to stymie momentum in Little Italy, where several four- and five-story condo complexes have been built in recent years and new restaurants have been opening at a rapid pace."

According to the U-T, which is owned by his client and Lincoln Club–backer Manchester, Robinson held that the new regulations "violate property rights and create an uneven playing field."

“I think it’s unfair that these property owners don’t have the same opportunities that the property owners around them had,” the U-T quoted Robinson as saying without identifying him as a real estate industry lobbyist or mentioning his longstanding ties to Manchester and his political operations.

Originally named to the airport board by GOP governor Arnold Schwarzenegger, Robinson was reappointed to the position by vote of the Republican majority county board of supervisors.

Disclosure reports filed with the city clerk's office show that Robinson and members of his firm have been lobbying on behalf of a long string of clients, including Alexandria Real Estate, a developer of bio-tech buildings; Washington DC-based billboard outfit Capitol Outdoor; and Garden Communities, a New Jersey–based residential development giant whose top executive gives heavily to politicos here.

Somewhat ironically, in light of Robinson's airport-board vote against Little Italy development restrictions, the firm has also represented Solar Turbines in a successful effort to deny residential building rights to developers of the old Fat City property across Pacific Highway from Solar's plant. Solar said it feared that its levels of toxic chemical emissions would ultimately force it to shut down if housing were built nearby.

According to Hecht Solberg's December 28, 2011, filing, its lobbying mission for Solar was to "Guard against residential development in Little Italy."

The U-T editorialized in favor of Solar, asserting, "Some 1,800 good-paying manufacturing jobs in the heart of San Diego will be on the line," if the residential project were allowed to proceed.

Robinson's firm also works for the controversial Stuck in the Rough Escondido golf-course-redevelopment project, accused by irate neighbors of dumping chicken manure on the now-closed course during a long-running battle with city government there.

Meanwhile, back in San Diego, according to the U-T’s story on the airport land-use restrictions, would-be developers in the flight path may be able to obtain exemptions from the San Diego City Council if they lobby hard enough.

"A land-use aide to Mayor Kevin Faulconer said Thursday that the city will add the airport authority restrictions to San Diego’s general plan within the next six months.

"However, he said it was possible some projects that exceed the limits in the plan could still move forward with a two-thirds vote of the City Council."

Great reporting. You can't read it straight like this anywhere else.