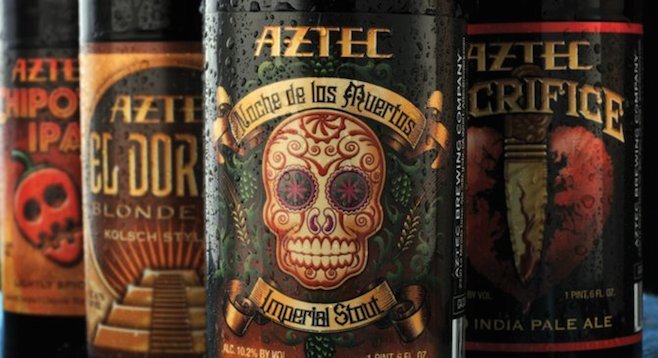 Even before Aztec Brewing Company (2330 La Mirada Drive, #300, Vista) was up and running, owners John Webster and Claudia Faulk received inquiries from businesses in Mexico asking to carry their beer. The reason — name recognition. Webster and Faulk’s interest is a revival of the original Aztec Brewing Company (known as Cervecería Azteca), which was founded in Mexicali in 1921. The company later moved to San Diego, post-Prohibition, settling in Barrio Logan in the early 1930s.

Since opening in Vista in 2011, the new Aztec’s beer has been available exclusively on this side of the border, but a recent agreement with The Beer Box will get Mexico its first taste of ABC cerveza in many lunas. Representatives from the Mexican beverage chain reached out to Webster and Faulk after discovering them online and following the progress of their company via social media.

After traveling to Vista for a tasting, the rep decided to bring back two beers, the company’s popular Chipotle IPA and Noche de los Muertos, a cinnamon-infused imperial stout. A wheat beer brewed with hibiscus, ginger and allspice may also make it down south. For now, the aforementioned duo will be sold in The Beer Box’s locations throughout Mexico, starting with those closest to its Mexico City store. The company will also bring Aztec beers to local festivals when possible.