Including design, drinking, ghosts and ABBA. 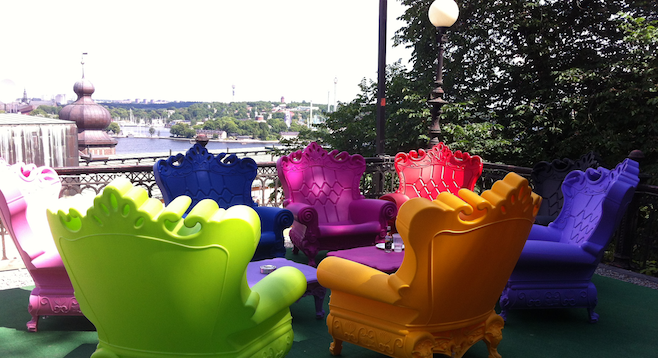 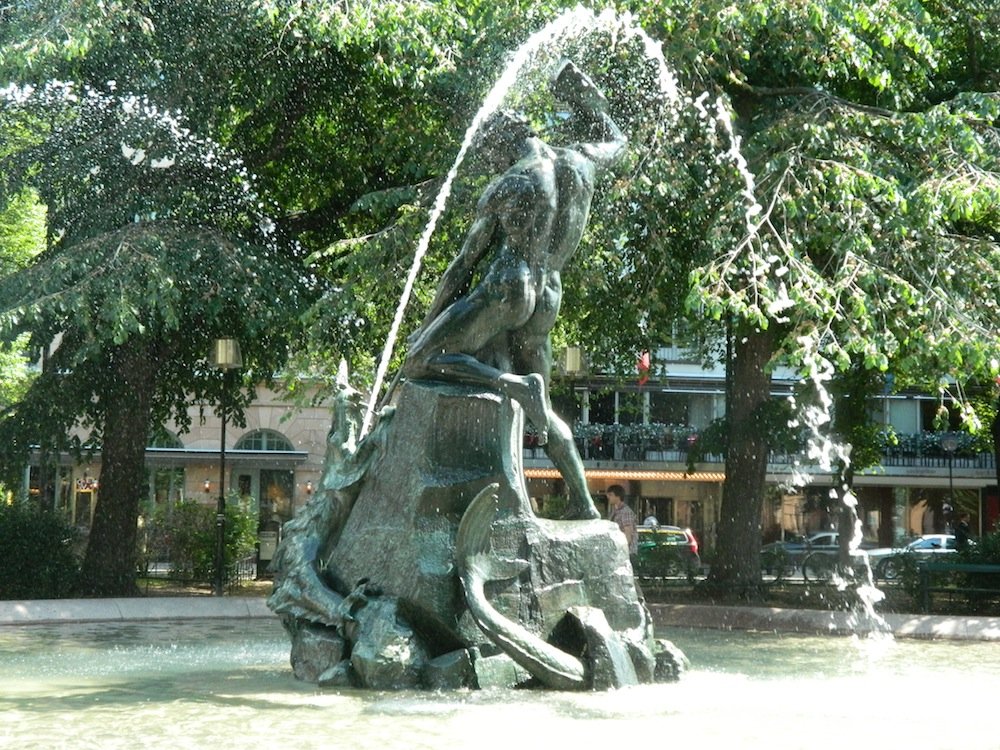 Statue in Stockholm. A real-life fireman was the model for this beefy guy.

Though Stockholm has much in common with other Scandinavian cities, it has a look and cultural legacy all of its own. This harbor city gets both American tourists and lots of fresh seafood.

I stayed at the historic and centrally located Hotel Diplomat that has miniscule rooms, but several lounges and a very popular bar. The internal courtyard balcony is scenic. They have a large sauna that’s available for free, but you have to reserve a block of time: it’s private, so you can wander around in your birthday suit. 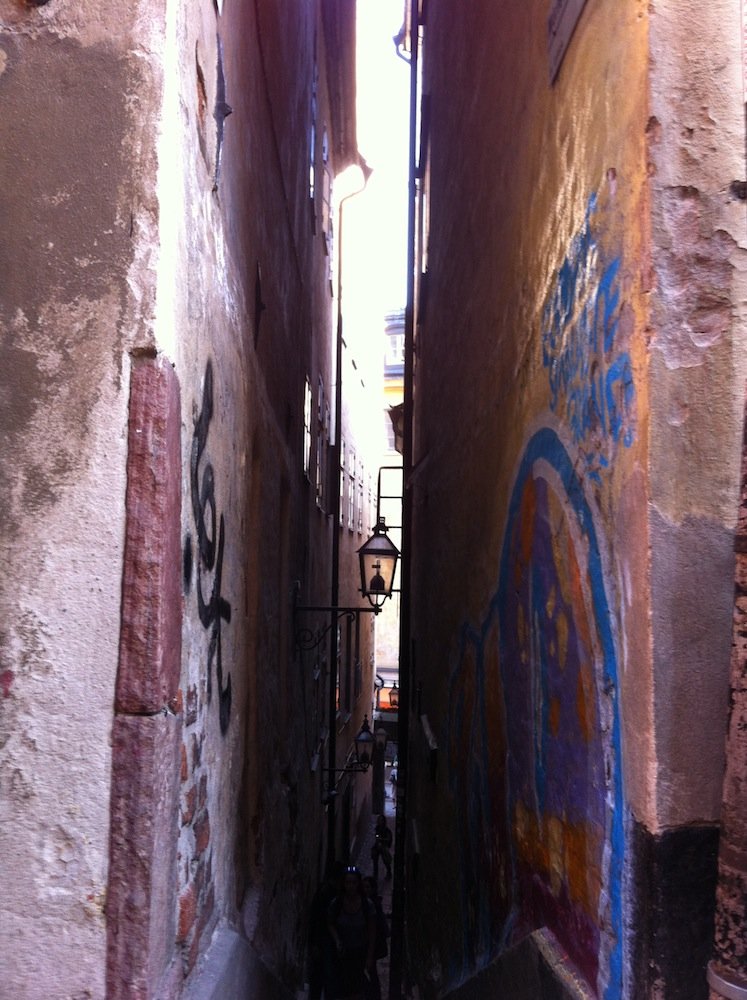 Narrow actual street where sailors used to be robbed and killed.

On one of the fourteen islands upon which Stockholm is situated, check out Hotel Skeppsholmen, a modern, eclectic hotel in an over 300-year-old home. The island serves as a sort of nature preserve, so you get the feeling of being in the country while still in the city.

It’s not just food there that’s locally sourced: ACNE makes the staff uniforms, while Byredo Parfums creates the signature scent for the hotel. Their dining area with communal tables encourages banter between locals and tourists. Hotel Skeppsholmen should really sell their delicious house-made mustard through Ikea – it’s that good!

In a spirit of anything goes, I went outside my comfort zone and ordered a starter of fried beef heart with horseradish. It's actually a flavorful, not gamy, piece of meat... with extra "beefiness." (The texture is much firmer than a steak, though.) 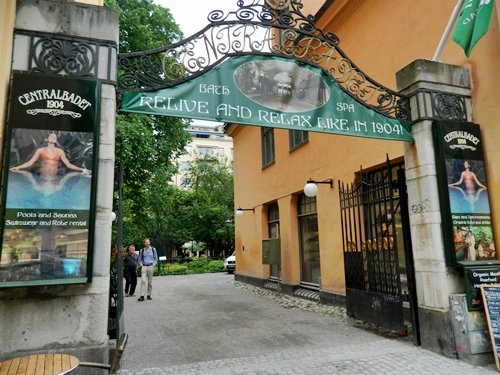 Get over your jet lag like the jet-setters and yachters have done since 1904 at the Central Baths. Located downtown, it’s another world once you walk in. Loud talking is discouraged. There’s a gym with all kinds of classes, including Pilates, Qi Gong and swimming techniques. They have a room with several hot tubs of different temperatures and wave speeds. A snack bar serves light fare and innovative health smoothies.

Sweden is known for its unique design style, and a good place to see it epitomized is at Svenskt Tenn. Everyone from rock stars to royalty heads to their one and only shop in the world for chic or cute or funny little pillows, fabrics. They have a lunch area that pays homage to the founder’s love for Chinese tea.

But not all Swedish design is formal-ish and posh: Speakeasy Tattoo Parlour is becoming famous throughout Europe, though it’s hidden on a side street. It’s run by women, geared to women and decorated in a vintage mix of tiki bar/Mexican cantina/Victorian whorehouse. They also house a cooperative of handmade vegan shoes, vintage-style hats and other fashion items.

See two hip, modern museums in one stop: the Moderna Museet (art) and the Swedish Centre for Architecture and Design. Both show world-renowned as well as Swedish and Nordic works of art. This summer, the Architecture museum featured the fabulous multimedia Jean-Paul Gaultier exhibit. 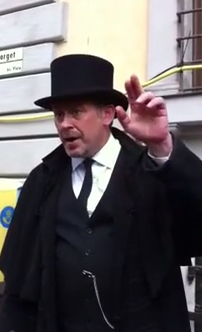 Fotografiska – the photo museum – has such wild and shocking photos, many don’t even seem real!

Ghost walks tend to either be grade A or F; it all really depends on whether the tour leader has an interesting story to tell. You don’t want an interminable walk that goes like, “And this happened and then this happened,” while they whip out improbable photos showing photo flashes as “orbs.” Instead, Stockholm Ghost Walk has a Britisher on staff, dressed in Victorian style and amusingly showing a glimpse of ancient Stockholm. You’ll see long-forgotten passageways and learn about murky places from the city’s past, including how the term “bloodbath” came to be. 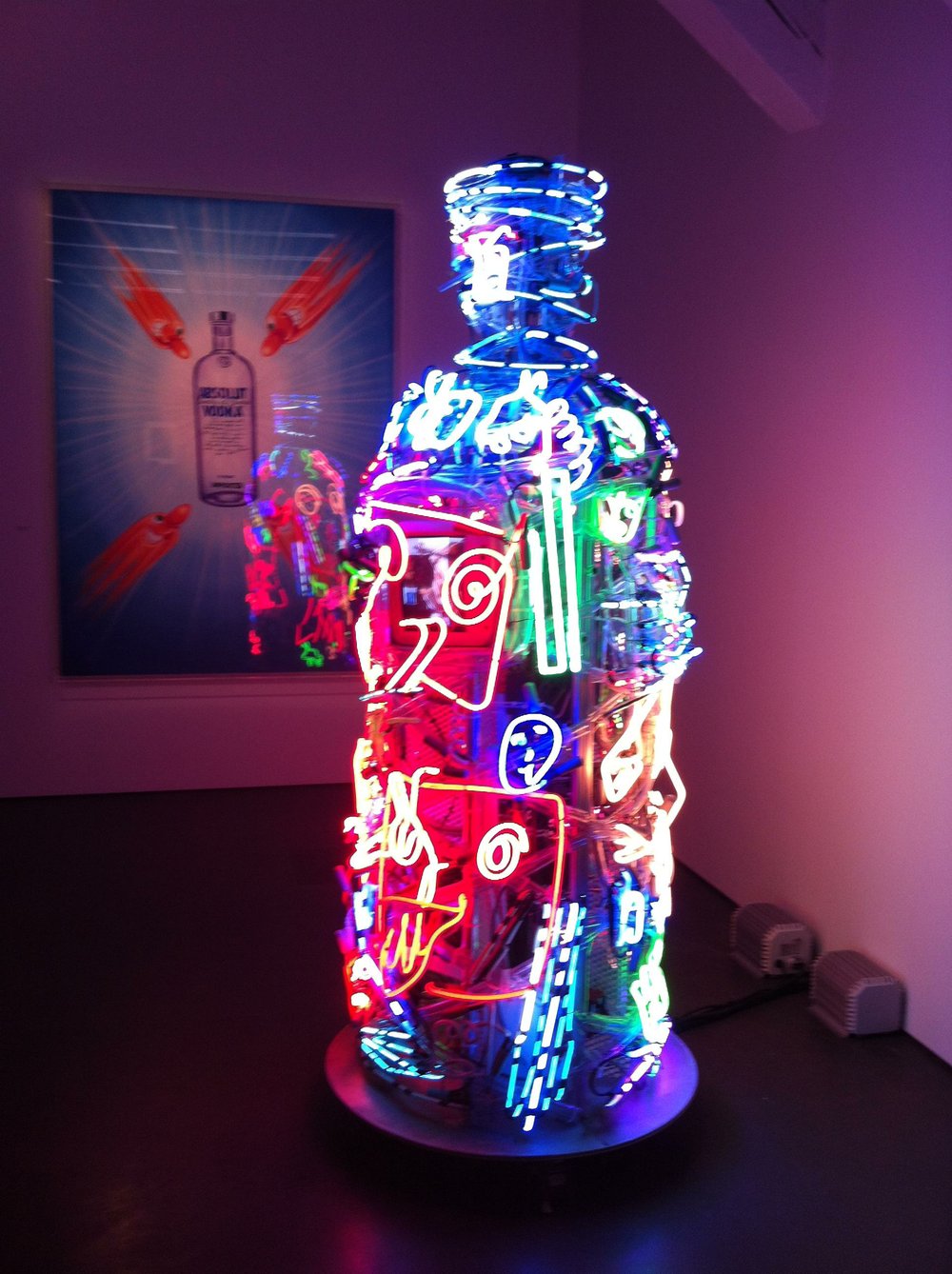 Inside the Spirits Museum.

You can really see a piece of Sweden’s past up close and personal: a gigantic, fairly intact ship from 1628 was discovered and is now the centerpiece of the Vasa Museum. It’s an organic thing, so visit it before it disintegrates! 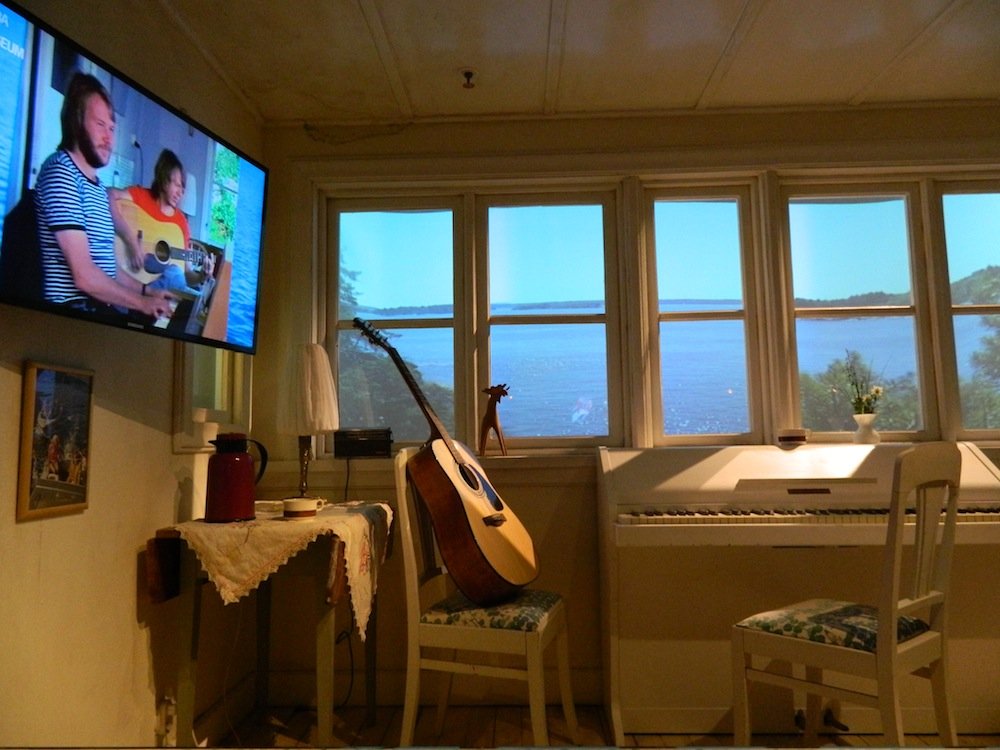 Inside the ABBA Museum.

It seems the whole world was waiting with baited breath for the opening of the Abba Museum. You’ll learn how two couples grew to become one of the most popular musical acts in history. You’ll hear their songs throughout the exhibits, some of which you’d probably never find in an American museum: one table has a big box of Tampax sitting in plain view. Another scene-in-the-life room replicates the kitchen where one of the band members had visitation with his child, post-divorce.