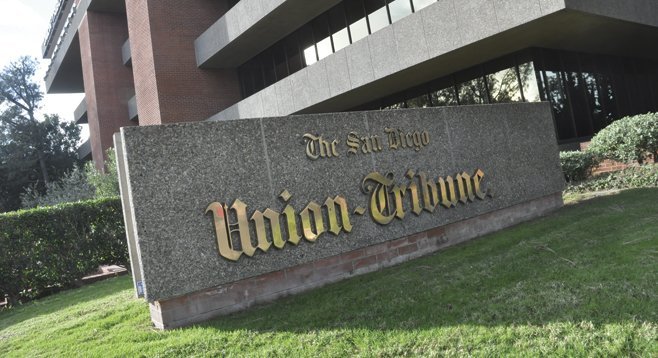 The battle over the City of San Diego's so-called linkage fee on commercial development to pay for subsidized housing ended with a whimper last month.

San Diego Chamber of Commerce honcho and ex-GOP mayor Jerry Sanders, the public face of a referendum campaign against the plan, proclaimed victory when the city council voted to withdraw the measure after opponents turned in 53,000 signatures to qualify for the ballot.

Said Sanders in a statement, "The City Council heard the voices of small businesses and job creators in San Diego and voted to rescind the jobs tax."

Now campaign-finance reports have finally been filed, and they show that among key financial backers of the referendum drive was U-T San Diego, the newspaper and online operation owned by developer Douglas Manchester, which the disclosure shows kicked in $42,413 worth of newspaper ad space to the campaign.

In addition to Manchester's in-kind contribution, the anti-fee campaign, officially known as “Stop the Jobs Killing Tax, a Coalition of Jobs Creators, Economic Development, Business and Real Estate Organizations,” raised a total of $120,025 in cash from the first of the year through April 12, the document shows.

Using that cash and funds raised the previous year, the group spent a total of $274,467, much of it paid to Arno Petition Consultants of Carlsbad.

Manchester and his news operation faced down a controversy last year over whether it had silently discounted political advertising for Carl DeMaio, his candidate for mayor in 2012.

After looking into the matter, Gary Winuk of the state's Fair Political Practices Commission last June concluded, “It does not appear that any campaign received a discount that is different from a discount made available to other members of the public,” a position disputed by some.

In a related story, the Manchester U-T raised their per-copy price by 50 cents. I'm sure that will soon pay off Dougie's contribution.

I know it was in add space. Just being a smart-a**. I do hope the free add space didn't displace any actual news, since Dougie's U-T has so much of it nowadays.

It costs real money to convince a gullible penny-pinching public to sign a referendum that rescinds Council's decision to update a cobwebby rule dating from long long ago that would have RAISED FEES on DEVELOPERS to HELP PAY FOR HOUSING FOR POOR PEOPLE here in Whoville. And then to spin it by calling the measure a "jobs tax?" That's downright Grinchy.

We don't need as much housing for the poor as we need a living wage for the working poor. San Diego employers are among the most amoral people around. They do not value hard work and expect the tax payer to pick up the tab.

RE: "which the disclosure shows kicked in $42,413 worth of newspaper ad space to the campaign."

Must be nice to "Donate" space in your own newspaper instead of having to donate checks and/or cash like all the rest of the tax payers...

Very nice, in fact, since the incremental cost of the space is a tiny fraction of the full rack rate for display advertising. That may have cost him a little as $5000 in paper, ink, and labor.

Probably more like $500! The paper is printed every day anyway. 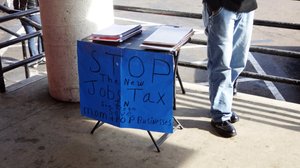 I took this photo of a signature-gathering person's homemade sign outside CVS in North Park. And I told the person standing there that his statement was a lie.