Local winners from the Olympics of brewing 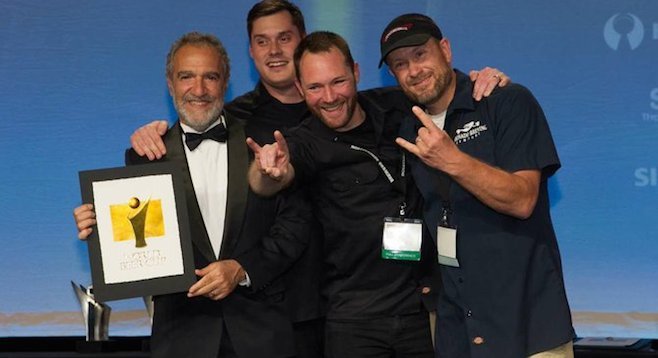 The Olympics of beer, the World Beer Cup, went down last Friday, and while San Diego’s brewers didn’t get to parade into the event in matching jumpsuits to the cheers of their countrymen, they left a great deal of community pride in their wake. Not only did San Diego County brewing companies combine for an impressive 11 medals overall, one —Coronado Brewing Company — came back with the title of world’s Best Medium-sized Brewing Company.

Back in January, I commented on how the improved beers at Coronado’s Tecolote Canyon tasting room seemed to signal they were hitting a groove. The certified, industry-professional judges agreed, awarding CBC a gold for its flagship Islander IPA as well as a silver in the barley wine category for a newer creation, Old Scallywag, a barrel-aged version of which debuted earlier this year. This was the first “Best” win for a local brewing company since Ballast Point Brewing & Spirits (then Ballast Point Brewing Company) nabbed Best Small Brewing Company on the planet in 2010.

Speaking of Ballast Point, they came very close to beating out CBC for the Best Medium-sized crown. The company’s Sculpin IPA earned a gold medal and Barrel-Aged Navigator Doppelbock merited a bronze. Other local beers that garnered gold were Old Ale 2013, a strong beer wisely reissued by AleSmith last year, and Habitus, a rye IPA that Mike Hess Brewing Company recently began canning. It was Hess’ first World Beer Cup medal. Another operation to get win number one was Societe Brewing Company, a cult favorite known for IPAs and Belgian-inspired ales that, surprisingly, medaled with an Irish-style dry stout called The Pugilist.

As they have historically, the Pizza Port family of brewing operations did well. Both of its packaged beer factions, Port Brewing Company and The Lost Abbey medaled, with the latter earning silver for its raspberry sour ale, Framboise de Amarosa, and the former for its mega-hopped Hop 15 double IPA. Meanwhile, Pizza Port’s newest brewpub in Carlsbad’s Bressi Ranch development took silver for Shark Bite Red, and May the Port Be With You, an imperial porter from its original Solana Beach brewhouse (that scored extremely high with me in a review earlier this year), struck bronze.

Beers produced elsewhere with local ties also did well. The beers of Oggi’s Pizza & Brewing are brewed in San Clemente at Left Coast Brewing Company, so they’re considered part of America’s finest sudscape to some extent. The brewpub chain's first-ever oaked offering, Barrel-Aged McGarvey’s Scottish Ale (a former San Diego Beer News Beer of the Week) took silver in the Wood- and Barrel-Aged Beer category. And grabbing silver in the American-style Amber Lager category was Coedo Brewery, a Japanese operation that, in the past two years, has collaborated with both CBC and Ballast Point.

Held every two years, the World Beer Cup is the largest brewing competition on Earth. The full list of local winners is as follows.