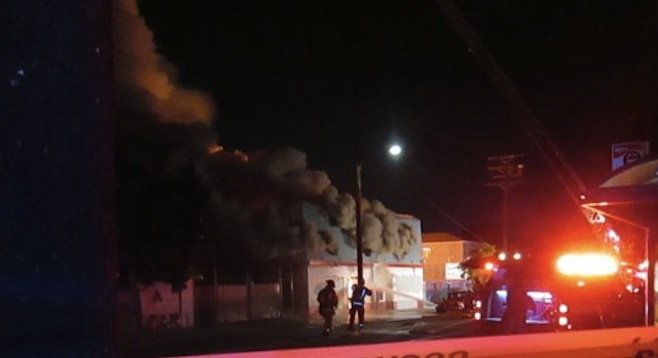 A notorious neighborhood bar, Malena’s, located on the 2900 block of National Avenue, long closed due to an arson fire, was ablaze in the early morning hours of Friday, April 11. 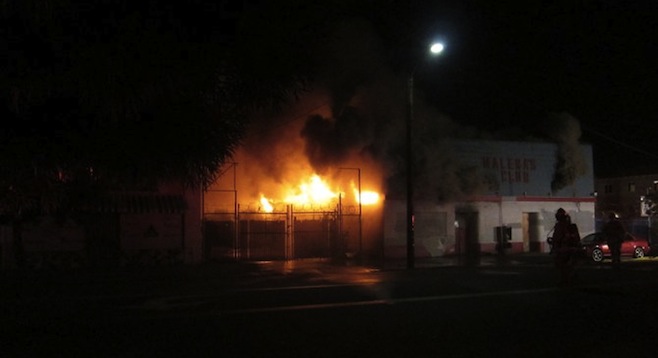 At around 2 in the morning, an enormous fire sent smoke and flames in every direction. Asked about the cause, a police officer responded, “We don’t know. When we got here it was fully engulfed.”

The response to the fire was massive. Seemingly every fire department and emergency vehicle arrived on the scene. The fire was fought from all directions. At the front of the building, firemen broke open the doors with axes. Two fire-department cranes poured water onto the roof. More hoses in the alley were directed at the sides of the building, which abuts two lots — one an empty field used for storage, the other a used-car business. A nearby apartment building was reportedly evacuated.

Police cordoned off the entire block of National Avenue with crime-scene tape and ordered residents who were standing across the street to move back to the corners.

In its heyday, Malena’s was a popular venue that often hosted bands that drew crowds of people in vaquero hats and boots. Many of the homeowners in the area tried to close the bar down due to the nuisance they claimed it caused. An arson fire closed down the bar in November 2008, and since then the gray-and-red building stood empty, boarded up, charred, half collapsed. Many of the locals who used to frequent the bar continued to hope that the owner would repair and reopen.

“Ya, no mas Malena’s,” a resident said. (No more Malena’s.) The moon hung trapped in the shreds of smoke above the burning building. At 5:30 in the morning, firefighters were still pouring water on the building.

Malena's was a popular and famous nightclub among the Hispanic community. Live bands would play there, drawing large crowds into the neighborhood. A lot of drama was associated with the bar as well, and it was rumored that the 2008 arson fire was started by a jilted lover.

UPDATE: The building has now been demolished, all that's left is a pile of charred wood. The block is still closed off and firefighters are dousing the pile with foam.