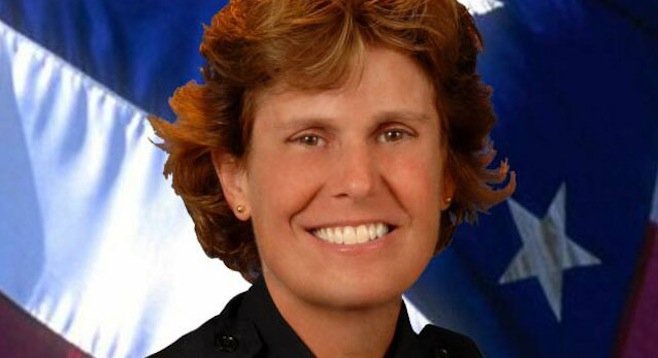 On March 4, Shelley Zimmerman was confirmed as the new Chief of Police for San Diego. Hopes were high that the new chief — the first woman ever to hold the position — would bring with her a new ethos, a new attitude, and a new approach to law enforcement. The Department was hurting — from a loss of numbers due to retirement and budget cuts, but more importantly, from a loss of morale due to public scandal. After a spate of sexual assaults and other abuses of power in 2011, then-Chief William Lansdowne instituted a seven-step program aimed at reducing police misconduct "to a more reasonable level." (The list included the now-infamous Step 5: "Ask yourself: how will she feel if I 'cop' a feel?" as well as the hilarious Step 1: "Criminals are people, too.") 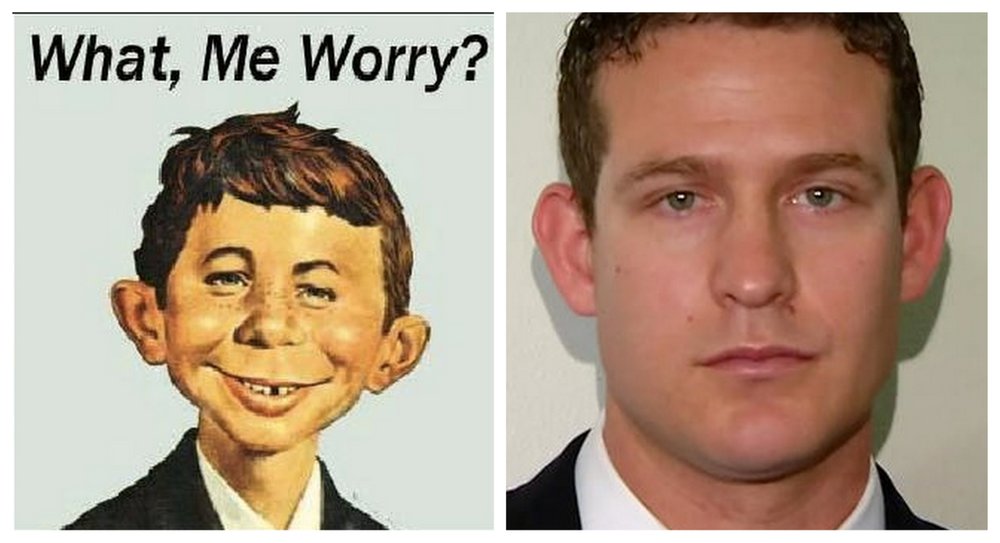 "Oh yeah? Well, my dad's the assistant chief of police…"

But earlier this year, a slew of angry ladies came forward to accuse Officer Christopher Hays — the son-in-law of an Assistant Police Chief — of unwanted sexual contact. Then two female detectives in the Department's sex crimes unit sued for sexual harassment. "How bad are things when you decide to commit a sex crime against someone whose job it is to detect sex crimes?" asked one of the sex crimes detectives.

Clearly, a change was needed. And for one brief shining moment, it looked like change had come. A woman was on top, a woman the police already knew and respected. Surely she would whip her Boys in Blue into shape.

Two days later, the dream was over. San Diego's wake-up call came on March 6, in the form of a police raid on Cheetah's Strip Club in Kearny Mesa. According to Cheetah's employee Crystal Starflower, officers burst into the strippers' backstage lounge and demanded to see the women's "licenses" and "other job qualifications." They took photos, documented tattoos, and then announced that they had received a "very hot tip" regarding a drug — known on the street as Love Potion Number 9 — being sold on-site. When a search of the premises produced no results, the officers demanded to see if the girls were "stuffing their bikinis" with the substance.

During the searches, says Starflower, "one officer declared that the tip 'must have been legit,' because he was feeling the Love Potion's effects even as he did his job. The cops said they needed to 'get to the bottom' of things, and that they wanted to score 'a big bust.' When I told them they were out of line, they asked if I knew how to put the 'shake' in 'shakedown.'" 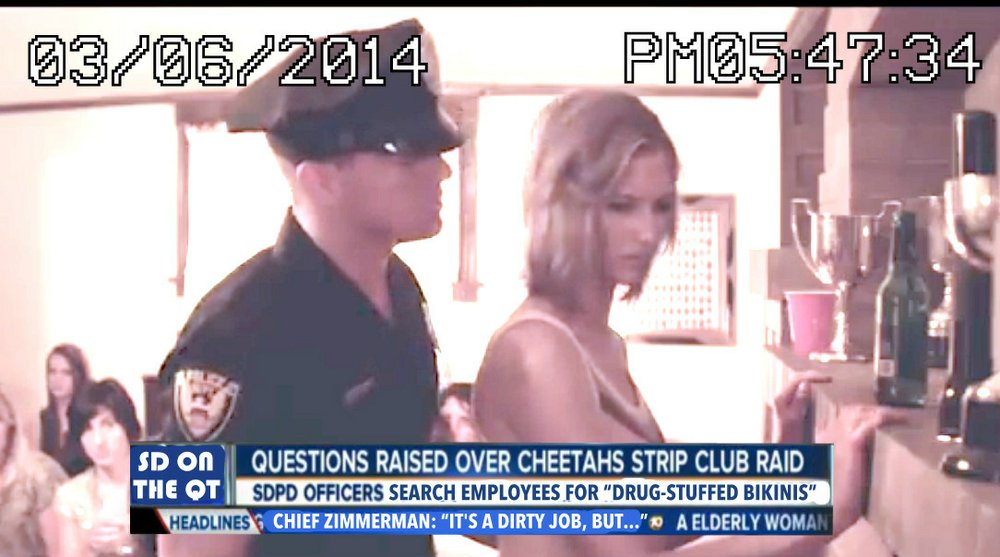 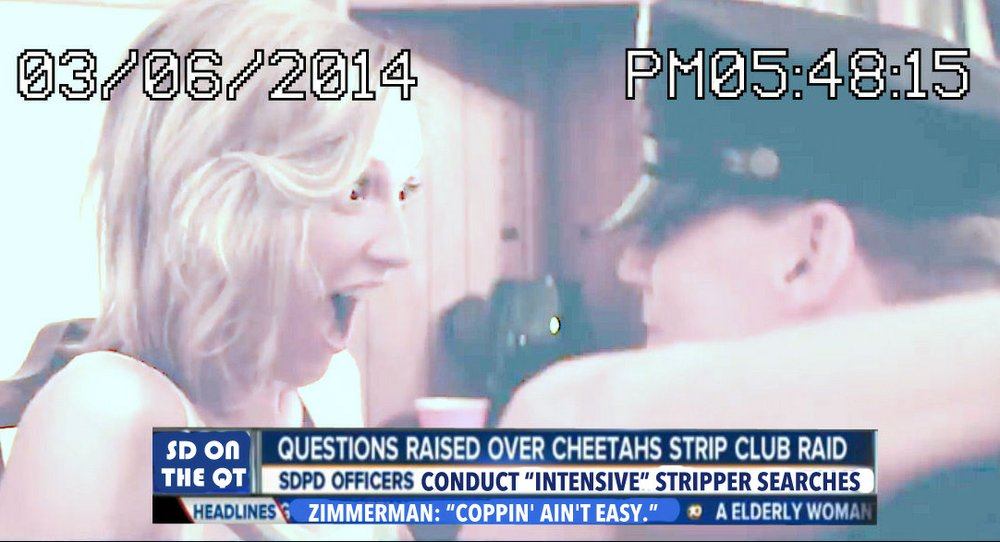 …and the club is considering selling the footage as a DVD titled simply, San Diego Sex Cops.

SD on the QT dressed up as a DC desk cop on vacation and bought enough rounds at The Badge Bar & Grill in Linda Vista to snag an introduction to Zimmerman while she was there watching the NCAA Women's Basketball championship game. When asked about the Cheetah's incident, Zimmerman replied, "Look, there's a reason cops are cops and not middle-school teachers or social workers. It takes some serious sack to do this job. It's all about channeling that energy, finding the appropriate outlet. And there's a reason strippers aren't middle-school teachers, too. They get groped by strangers all the time. They can take it — no harm, no foul. Plus, those inspections are part of the job. We have to be vigilant in this area, so that ordinary naughtiness doesn't cross over the line into illegal activity." 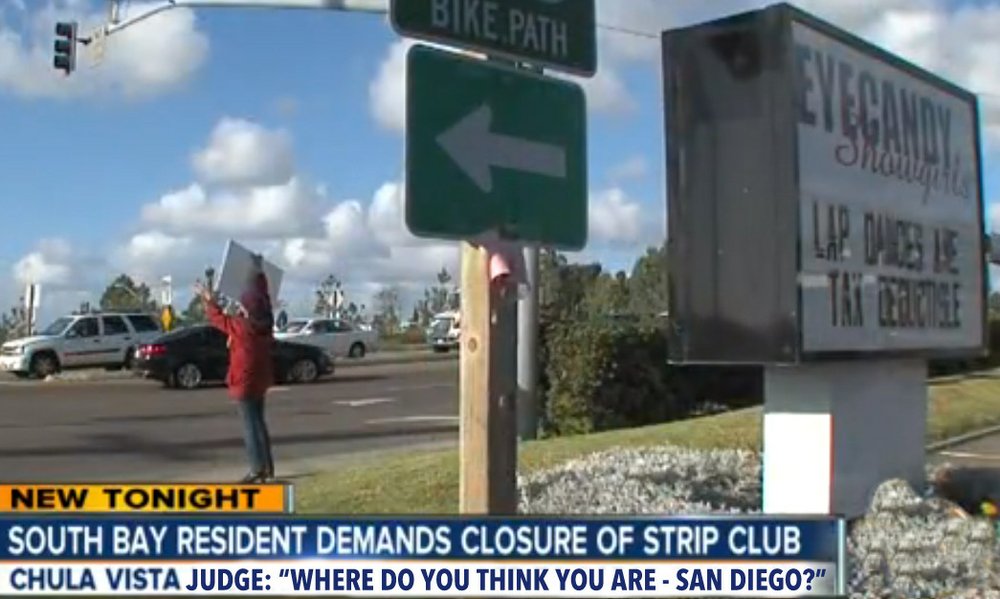 Speaking of illegal activity: in Chula Vista, resident Joann Libby has launched a quixotic, one-woman crusade to get the city to do something about Eyecandy Showgirls. Eyecandy owner Randy Bumregard duped the city by applying for a cabaret license and then opening a strip club that offered fully nude (and therefore totally illegal) lap dances.

The city ordered Bumregard to shut down by June 7 of last year; so far, he has blithely ignored the order, even as reports of drug use and prostitution at the club have multiplied. The city has asked for a court order to make Eyecandy shut down, but, says Eyecandy attorney Joel Sleazak, "Forget it, Jake — it's South Bay. You know how these things go. But I do worry about the club's claim on its signage that 'lap dances are tax-deductible.' If there's one thing we've learned from Jesus Gandera and the whole Sweetwater scandal, it's that South Bay is very interested in getting ahold of all the taxpayer money it can grab. Bumregard might want to rethink that one."

And I always thought that potion was make believe. But here it is! 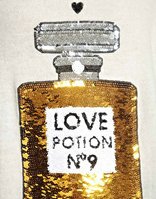 Actually, I think it may be a Baskin-Robbins ice cream flavor, usually featured in February with equal-opportunity white or dark chocolate.

Nice way to segue into Cheatwater there, Mr. Mencken! lol

Gotta love zimerman's damage-control answers, but she is right--and wrong at the same time.