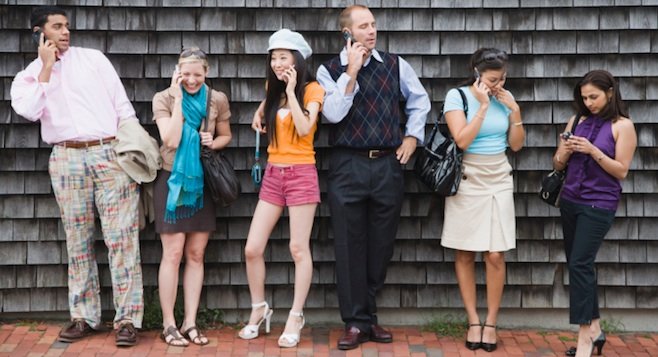 It’s new cell phone time for me, but I can’t decide between the Nexus 5 and the iPhone 5. Which one should I get, and why? I use a Macbook, and the iPhone 4s, but I am kind of leaning toward the new Android. Which one do you use? — Angie, Ocean Beach

Both phones are, for all intents and purposes, exactly the same. They are the best cellular telephones on which you could possibly spend your hard-earned money (or your parents’ money if you’re lucky), and truly some of the most amazing pieces of technology ever to grace the hands of ignorant consumers who will use them to take pictures of salads and send text messages while driving. The biggest difference between the two is the message you will send by using one over the other.

Imagine yourself with the iPhone 5 in hand. Slick. Urban. Unconcerned with the nuts and bolts of how things run, your main concern is that they always look good, and, most importantly, that everybody knows you have an iPhone. It even comes in gold. Yeah, that’s right...gold!

Now, picture yourself with a Nexus 5.

“Yeah, I don’t have an iPhone,” says every fiber of your being. You can talk a big game about how the Android market provides you greater access to freely developed apps, even if you don’t really use the phone as anything more than a glorified Snapchatstagramming handset. You’ll ignore the fact that Hangouts still won’t send MMS (srsly!), or that half those Android-only apps don’t do half as good a job of doing half of what they say they’ll do, because you have a sweet Nexus and you’re, like, minutes away from getting Google Glass.

But, for real, they’re both amazing devices. I have one of each.

I want to start off by saying that by no means am I a fanboy of any phone platform.

I however currently own a stock Android HTC One, which runs pretty much the same OS configuration as the nexus mentioned in your response to Angie from ocean beach. In that response you suggest that the hangouts app, that handles text messaging and Google IM, can not send MMS. That is incorrect, and if you want proof seems me your phone number and I'll gladly send you a selfie."

Google pushed three or four updates to Hangouts between when I wrote that and when it published. Now, only some users with some carriers using some phones are experiencing MMS trouble with Hangouts. Doesn't seem to be any rhyme or reason to it, and hopefully it all goes away soon.